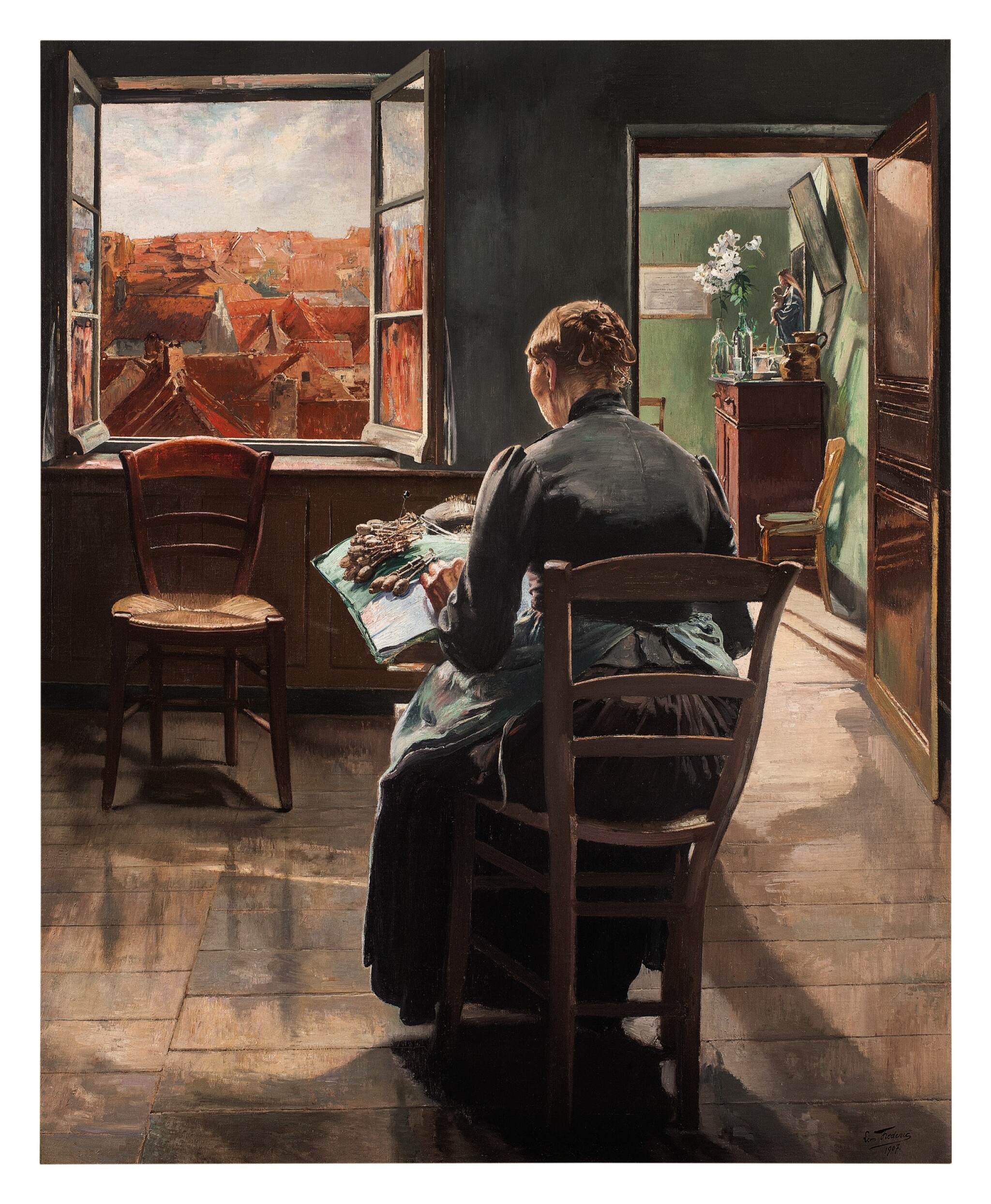 The painting appears to be on its original canvas and is in generally excellent condition. No retouches are readily visible under UV light, there is beautiful impasto in areas throughout, and the colors have retained a deep saturation. The paint layer appears clean, and the picture should be hung in its current condition. In a carved giltwood frame.

"I have always been moved by silence represented in paintings throughout history, from Vermeer’s interiors depicting a lone woman bathed in light and Jacobus Vrel’s empty street scenes, to the quiet beauty of Hammershoi’s silent rooms, and this painting by Leon Frederic is such a work. It depicts a Flemish woman quietly working in an interior with a townscape beyond, and the light that illuminates the flowers and the wall on the right side is particularly striking."

Léon Frédéric drew on contemporary and earlier influences as well as on his own personal spiritual views of life and nature to evolve a unique artistic style. Working during a period when Impressionism and its offspring Divisionism and Post-Impressionism were the main currents of avant-garde art, Frédéric’s idiosyncratic realism comes as a considerable surprise. Frédéric studied briefly under Charle-Albert before attending the Académie Royal des Beaux-Arts in Brussels, where he became a pupil of Jules Vankeirsblick (1833-96) and Ernest Slingeneyer (1820-94). He also worked in the studio of Jean-François Portaels (1818-1895).

The tenor of Frédéric’s work was formed largely by the Italian and Flemish art of the fifteenth and sixteenth centuries, and the poetic paintings of the English Pre-Raphaelites. A two-year sojourn in Italy (1876-78) which included visits to Venice, Florence, Naples and Rome, exposed Frédéric to the works of the Italian Renaissance. This experience conveyed to the painter the profound beauty of nature with its artistic disposition toward harmony, and the inherent nobility of mankind. This sense of harmony was balanced by a personal artistic vision which conveyed a truthfulness to nature which was reinforced by Flemish, Dutch and German Old Master painters who had directly studied their natural surroundings. Both Italian and Northern Renaissance schools depicted the natural world through clear, detailed compositions, and their influence infuses Frédéric’s work with a lucid and unaffected honesty. In his symbolist designs, including his various large multi-paneled Cycles of Life, Frédéric attempts to unify Christian mysticism with the current social conditions of the working class. The landscapes included in many of these compositions take delight in a pantheistic communion with nature.

Following his stay in Rome, Frédéric made his debut at the Brussels Salon in 1878. He then became a member of the Brussels-based association L’Essor, a group of young artists who wanted to paint contemporary social reality instead of using imaginary or literary themes as their artistic starting point. Subsequently, his work was exhibited in Ghent, Liège, Munich, Nice and Paris. He was awarded gold medals for painting at the Exposition Universelle of 1889 and 1900, and in 1929, together with James Ensor, Frédéric was created a baron.

Many of Frédéric’s early works show poor people and peasants, especially after 1883, when the artist moved from Brussels to Nafraiture, a small village in the Ardennes region of Belgium where he lived for several years.

At first glance, the present realistic composition seems quite straightforward. The painting’s quiet intimacy draws the viewer in to a spare interior, where an elderly lace maker bends over her work, bobbins and pins before her. However, the subject matter and informal composition are rendered equivocal by this monumental woman, mysteriously turned away from us. The mood and manner is quiet, and time seems to hang suspended. The lace maker, dressed in black, but wearing a blue work apron, seems to live alone, but an empty chair faces her, set beneath the open window. This chair exactly mirrors her own, and is a portrait of absence. The simple room displays an exquisite symphony of light. The watery reflection on the polished floor, the dappled light and shadows in the distant bedroom, the bright stalk of Madonna Lilies set in a simple glass bottle before a life-like statue of the Virgin and Child, all help suggest a strong sense of three-dimensional space. Perhaps the most striking passage of this contemplative work is the jumble of red-tiled roofs viewed from the open window. Their bright color and chaotic arrangement are in striking juxtaposition to the neat, quiet interior dominated by the silent concentration and downward gaze of the lace maker, her expression inscrutable to the viewer.

Spinning, weaving, and needlework of all kinds have, since biblical days, been seen as activities associated with feminine virtue. The book of Proverbs (31: 10-13), for instance, in a section which contains the lines “Who can find a virtuous woman? For her price is far above rubies,” goes on to say: “She seeketh wool, and flax, and worketh willingly with her hands.” In the Odyssey, to cite a classical, example, Penelope puts off her anxious suitors, while awaiting Ulysses’ return, by weaving by day and unraveling her work by night. Perhaps Frederic here portrays industriousness as a symbol of domestic virtue, a theme bolstered by the inclusion of the lilies and the statue of the Virgin Mary, all bathed in radiant light on this warm spring or summer day.

Léon Frédéric certainly would have been familiar with the long artistic tradition of depicting the subject of lacemaking. The theme was particularly popular in the Seventeen century and was frequently portrayed by Dutch artists such as Johannes Vermeer, Pieter de Hooch, and Nicolas Maes.