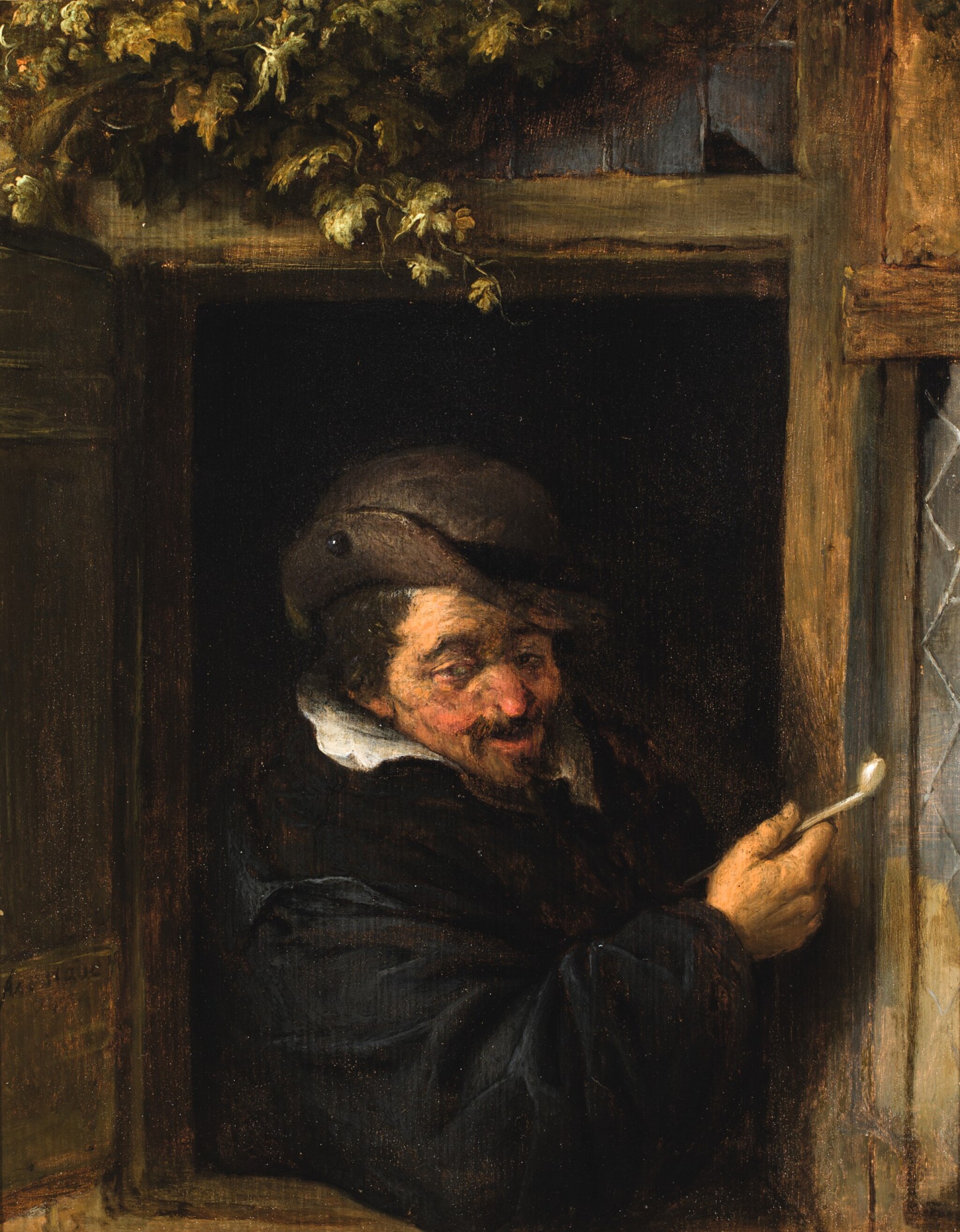 A PEASANT IN A WINDOW SMOKING A PIPE

The panel is flat, stable, and cradled on the reverse. The image reads well beneath clear varnish with some impasto retained in the upper left corner. Under UV inspection, scattered retouching is visible, concentrated in the dark background, small dots on the man’s sleeve, and in the window panes at right. A few dots of retouching around the man’s face and hat are well applied and not visible to the naked eye. Painting can hang in its current state. Offered in a decoratively carved giltwood frame.

"The master narrator Ostade was able to tell an entire story in a painting of a single figure, here a one man show whose proscenium is a window opening, his props a clay pipe and the vine growing above his head, its unseen grapes the indirect cause of his ruddy cheeks."

This witty and hitherto unpublished small panel is typical for Ostade, the chief of Dutch peasant genre painting in the seventeenth century. According to his biographer Arnold Houbraken, Ostade was a pupil of Frans Hals at the same time as Adriaen Brouwer. While Hals does not seem to have exerted noticeable influence on Ostade, Brouwer on the other hand, having quickly developed as the heir of Bruegelian peasant art, became pivotal. By the early 1630s, Ostade had already established a reputation of his own outside his native Haarlem, having registered with the Haarlem guild of St. Luke in 1634. Ostade thus began his career painting scenes of brawling and gambling peasants in a restricted palette of browns, strongly indebted to those of Brouwer. Although taverns, barns and cottages populated with peasants remained his favorite subject, his raucous atmospheres began to be replaced by more tranquil scenes during the 1640s and he enriched his stock of settings with placid domestic courtyards and doorways. In these later works Ostade limited the number of protagonists. Simultaneously, his technique and coloring grew ever more refined. Ostade’s mature genre productions convey an idealized view of peasant life in which the characters are friendly and caring individuals. The present panel is a highly characteristic and fine example.

In Ostade’s day smoking tobacco was a still relatively new habit and elicited diverse responses. Some seventeenth-century doctors recommended it as a health product, attributing medicinal properties to the weed. Preachers condemned smoking because of its harmful intoxicant effects and equated it with the excessive use of alcohol. Smokers figuring in seventeenth-century imagery could convey an array of meanings. A smoker could represent one of the five senses. The quickly vanishing smoke was also likened to the evanescence of life and thus a thankful vanitas motif. Low-life genre scenes, such as those by Brouwer and Ostade, typically satirize the immoderate pursuit of sensual gratification. In Adriaen van Ostade’s universe, smoking, along with drinking, singing and wooing, are the main activities of his protagonists. In his later paintings, such as the present work, the artist views these peasants indulging in this pastime with an eye of clemency instead of stern disapproval.