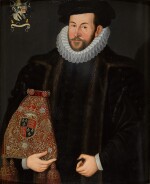 THE UNKNOWN FOLLOWER OF HIERONYMUS CUSTODIS

PORTRAIT OF SIR JOHN PUCKERING OF KEW, SURREY AND WESTON (C. 1544–1596), SPEAKER OF THE HOUSE OF COMMONS AND LORD KEEPER OF THE PRIVY SEAL

emblazoned, upper left, with the arms of Puckering

The painting appears to be in very good condition with no apparent extant damage or loss of paint. The intricate brushwork of the seal purse is particularly well preserved. The panel is constructed of three, equally sized, broad planks vertically joined. It remains stable and uncradled, with a slight bow around the vertical axis. Examination under ultraviolet light reveals retouching down the vertical panel joins, as well as some scattered minor retouching throughout and strengthening in the background, particularly in the upper right corner. There is a slightly glossy varnish overall. The painting does not require any further restoration or conservation.

“Elizabethan portraiture is usually characterised by a heavily stylised treatment of the facial features, but here Lord Keeper Puckering has a wonderfully knowing and characterful expression – entirely appropriate to a man who, in an age of entrenched privilege, raised himself to the very pinnacle of English politics entirely on his own merits. Not to mention the killer man bag!”

This remarkably well-preserved Elizabethan portrait was painted around 1592 to celebrate Sir John Puckering’s appointment as Lord Keeper of the Great Seal to Queen Elizabeth I. The Lord Keeper discharged all duties connected with the Great Seal, and was usually a peer, with a status equal to that of Lord Chancellor. He was charged with physical custody of the Royal Seal itself, which was housed in the seal burse (purse) that Puckering is shown here so proudly holding, spectacularly rendered and embroidered with the Royal Arms of England. Originally of white leather or linen, by the end of the sixteenth century the burse was transformed into a magnificently decorated velvet purse. This example shows the crowned royal cypher and the letters ‘ER’ (Elizabeth Regina) and a Tudor rose. Its heraldic design is set within a scrolling foliate border and its shimmering surface is achieved by the use of gold threads and silver ‘spangles’. Its elaborate design is a testament to the lavish tastes of the Elizabethan court. As a ‘perquisite’ or ‘perk’ of office the keeper was allowed to retain the old seal with its accompanying burse. Elizabeth I had five chancellors during her reign (1558–1603), each with a different burse for the Great Seal, so Sir John’s would have been gifted to him.1 The portrait can confidently be attributed to ‘The Unknown Follower of Custodis’, an artist first identified in 1969 by Sir Roy Strong on the basis of the recurring use of an identical form of inscription, as well as obvious stylistic characteristics.2 The artist seems likely to have been an assistant of Hieronymous Custodis, a Flemish painter born in Antwerp who came to England circa 1585 and was active in London until his death in 1593. He may even have inherited his master’s pattern book and, though his work lacks the subtlety of Custodis himself, it has its own delicacy, as evidenced here by the extremely fine and detailed portrayal of the sitter’s privy seal bag. A small corpus of works attributable to the ‘Unknown Follower’ was assembled by Strong and published in 1969 in his seminal work The English Icon.3 This group of some eleven portraits includes two pairs of pendant portraits depicting Nicholas Wadham and his wife Dorothy Petre, the founders of Wadham College, Oxford.4 Although more limited in their colour palette, they bear close comparison to this portrait and share the same, strikingly two-dimensional format.

Sir John Puckering (c. 1543–1596) was a man of modest beginnings but raised himself to the highest civil office in the state. Admitted to Lincoln's Inn on 10 April 1559, he was called to the bar in 1567 and became an administrator and Speaker of the House of Commons before being knighted and sworn in as a member of the Privy Council on 28 May 1592. In 1595 Puckering entertained the Queen lavishly when Elizabeth visited him at Kew, in Surrey. With such expenditure, and while petitioning the Queen for a grant of land in 1595, Puckering complained that as speaker he had lost £2000 from his legal practice, and that the Lord Keepership cost him £1000 a year. But like previous incumbents, including Sir Nicholas Bacon (1510–1579) and his successor Thomas Egerton, 1st Viscount Brackley (1540–1617), Puckering used his position to buy land on a large scale, acquiring the manor of Weston, Hertfordshire, in 1593, and further estates in Warwickshire in 1596. He died intestate of apoplexy on 30 April 1596, aged fifty-two, and is buried in Westminster Abbey, where his widow erected a substantial monument.

1 Two burses from this period survive: the first belonged to Sir Christopher Hatton (Puckering’s predecessor) and is now in the Victoria & Albert Museum, London (T.40-1986); the second is in the British Museum, London (1997, 0301.1).