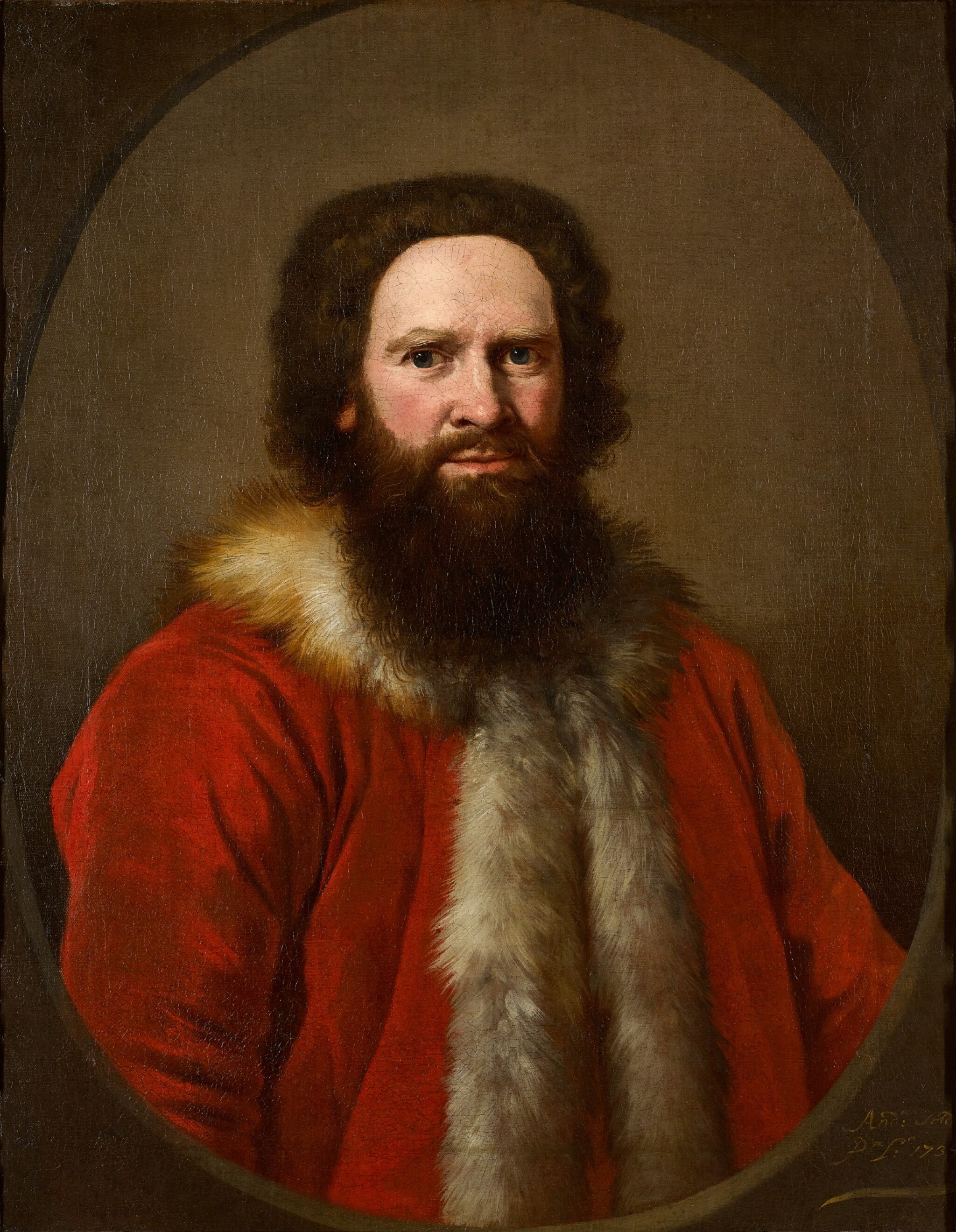 PORTRAIT OF A BEARDED GENTLEMAN IN TURKISH COSTUME, POSSIBLY A MERCHANT OF THE LEVANT

The canvas has been recently relined and the painting is in overall good condition, with no extant damages or loss of paint. Examination under ultraviolet light revealed scattered minor retouching throughout, particularly in the reds of the sitter's costume and in the lower portion of his beard. There is also a line of retouching to the inner pressure mark of the lower stretcher bar and two small old tear in the background just to the right of the sitter's head, in line with the nose. There are a number of small further retouchings scattered throughout the background and the remnants of a discoloured old varnish in various places. There is no need for further restoration or conservation and the painting is ready to hang.

"Soldi’s short spell in the Levant created some of the most sumptuous images of European merchants ever created. With their curling whiskers and luxurious, fur lined robes they are an exquisite visual record of a lost world. A world of cultural interchange and integration; of spices and silks; of romance and hardship; of fortunes won and lost."

The date of this portrait, 1734, places it clearly in the Levant, most likely in Aleppo, where Soldi is known to have been active as a portraitist at that time. The sitter’s lavish red velvet fur-lined outer gown (‘Turkish robe’) and exaggerated facial hair further confirm the painting’s Orientalist connections. Only his piercing pale blue eyes serve as a reminder of his western roots. Soldi’s bold use of colour and dexterity at rendering different textures, as show-cased here, would ultimately set him apart from the old and middle-aged guard of native portrait painters in England at that time, (Richardson, Dahl, Jervas, Seeman and Vanderbank), securing his success as a society portrait painter on his arrival in London in around 1736. All biographical information on Soldi’s early years comes from the antiquarian George Vertue, who first noticed the artist in 1738, writing that he ‘came to England from the voyage he had made into the Levant, Turkey, Constantinople &c’, and again in 1742 noting ‘at Alleppo he became acquainted with some English Merchants, whose pictures having drawn, with much approbriation, they advised him to come to England which he did – with some of them’.1 Only a handful of works from this period are dated, the two earliest inscribed 1733 and the latest 1736, and all are of ‘Pashas’ – English merchants of the Levant Company who sported Turkish robes and pelisses, turbans, and grew long moustachios.2

The present portrait is unique among this small group in presenting the sitter with a full beard and without a turban. Its format is also the simplest and most intimate, without props to suggest the status or position of the sitter, nor a background to place him geographically, but presenting him simply in a feigned oval. As such it doesn’t seem to have been specifically devised as a conscious display of mercantile trappings. This is surprising, for as Tabitha Barber has noted, Soldi’s portraits from Aleppo were for the most part ‘embellished to impress a home audience... [and] Aleppo society was acutely conscious of wealth and status – the English merchants were careful to wear costly furs and silks, to pass as men of rank: Soldi’s portraits of young gentlemen enjoying the pleasures of the Levant reflect the general view of the merchants as rich, powerful and privileged individuals’.3

Whilst Soldi’s patrons at this time were predominantly merchants of the English Levant Company based in Aleppo, Syria’s ancient trading capital, the sitter in this portrait is not necessarily English, or indeed a merchant, though both are certainly a possibility. As an Italian artist based in one of the major entrepôts of the East, we can assume that Soldi may also have painted itinerant Italians and other European representatives in and around Aleppo. The city commanded the great trans-desert trading routes between East and West, chiefly for silk – from Antioch, Tripoli and Beirut, but the most prized was from Persia – and drew travellers and adventurers, as well as merchants, from all corners of the world. Both the Dutch and the French, as well as the Swedes, had similar Levant Companies active in the region during the period and, together with the English, maintained factories at Scanderoon (Iskenderun, also known historically as Alexandretta), Aleppo’s main port on the Mediterranean.

2 Ingamells notes the most impressive of these being Soldi’s portraits of the same sitter, the English merchant Thomas Sheppard (d. 1757); see J. Ingamells, ‘Andrea Soldi’, in Connoisseur, vol. 185, March 1974, p. 192. In his checklist of Soldi's works in the Walpole Society (XLVII, 1980), Ingamells lists only three portraits from the artist’s Aleppan period: the two three-quarter-lengths of Thomas Sheppard, which are signed and dated 1733[?] and 1735/6 respectively (nos 57–58, both location unknown); and a portrait of an unidentified gentleman, small full-length, with moustache, wearing Turkish trousers and slippers, which is signed and dated 1735 (no. 69, Sotheby’s, 30 April 2014, lot 827). Research into Soldi's portrait of the English merchant Henry Lannoy Hunter (c. 1733–36), acquired by Tate in 2005, has helped put the artist’s early career in the Levant into sharper focus, and Tabitha Barber’s exhibition in 2008 brought to light more works from this early, formative period in his career. Four previously undocumented portraits of English Levant Company merchants by Soldi have subsequently appeared at auction, including one with a view of the city of Aleppo in the background (Sotheby’s, 7 July 2011, lot 321). Sarah Moulden’s unpublished MA thesis, ‘Turning Turk’: The negotiable self in Andrea Soldi's Levantine Portraits, c. 1730–36, Courtauld Institute of Art, London, 2007, has thrown further light on this group of portraits.