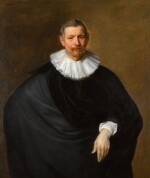 PORTRAIT OF HUBERT DU HOT (B. CIRCA 1573), THREE-QUARTER LENGTH, IN BLACK WITH A WHITE RUFF

The following condition report is provided by Sarah Walden who is an external specialist and not an employee of Sotheby's: Sir Anthony van Dyck. Portrait of Hubert du Hot. This painting has a strong lining and a stretcher which is not very old, (it was not possible to see the back closely). There appears to be a pentiment in the ruff, with a narrower collar beneath. A rather broad band of several inches along the base edge appears to have been reworked in some way, with rather heavy retouching also down the right edge, possibly adjusting both edges. Under ultra violet light both of these areas clearly have quite wide retouching, with a narrower strip of retouching down the left edge. However quite extensive retouching can be seen within much of the background as well, and there does appear to have been a campaign of restoration perhaps characteristic of the seventies of the last century, with frequent retouching throughout, even within much of the fine brushwork of the head, over the slightest hint of craquelure. The great power of this portrait survives despite such excessive work, which has affected the characteristic sense of space around the figure nevertheless. This report was not done under laboratory conditions.

"Van Dyck’s portraits from his 2nd Antwerp period are handled with a softness and sensitivity to his sitter’s features and character that speak of an artist at ease with his talent and no longer needing to prove himself. The limpid eyes of his Lillois sitter and the soft skin of his face, defining characteristics of the artist’s mature style, are in gentle contrast with his hieratic pose."

This portrait was most likely painted in Antwerp in 1632, just before Van Dyck left for London and the court of King Charles I. Van Dyck's portraits of this time are distinguished by, and were clearly particularly sought after because of, his ability to combine the appearance of casual elegance with a sense of nobility in his sitters. Considered to be an original work by Van Dyck throughout its publication history, the authenticity of this painting was questioned in the 2004 monograph on the basis of a photograph, when the portrait's whereabouts were unknown. Since its last appearance on the art market and its subsequent cleaning, however, its autograph status has been unanimously endorsed and reinstated by scholars,1 and the portrait may once again be considered amongst the works produced during Van Dyck's prolific and highly successful 'second Antwerp period'. The gentleman depicted is known to be Hubert du Hot thanks to prints by Adriaen Lommelin, who engraved the portrait in the same sense, and on the second state included the identification of the sitter (in the third state of the print, the man’s head was actually replaced, and identified as the engraver Schulte Adams Bolswert). A painted copy of the portrait in the Musée de la Chartreuse, Douai, is inscribed: AET . 58 . A . 1632 ., which is an accurate indication of the sitter’s age and a very probable reflection of the original date of execution.2 Du Hot was a French nobleman born in Lille before 13 December 1573 (when he was christened in the church of Sainte-Catherine). He was a 'connétable souverain' (a ministerial post, roughly translatable as 'Grand Officer of the Crown') of the Confraternity of Saint Barbara, and married Marie Baillet, daughter of Robert and Marie Vendeville, with whom he had two children.3

The present work shares many characteristics with Van Dyck's other portraits from this period, particularly in the assured, fluid brushstrokes which characterise the sitter's features and expression. Influenced by techniques he had learned in Italy, Van Dyck started to paint more and more thinly, with a much reduced use of impasto, in more transparent layers of glazes. He has executed the head of the sitter here particularly sympathetically, imbuing Du Hot with a sense of benevolent dignity and shrewd intelligence, not unlike the portrait of Alexander della Faille, today in the Musées Royaux des Beaux-Arts, Brussels.4

When Van Dyck returned to Antwerp from his trip to Italy in 1627 his reputation was such that demand for his work had increased substantially, particularly for portraiture, resulting in an extraordinary level of output during these five years. Van Dyck was famed for his speed of execution, but he also employed a number of assistants in his studio to expedite the supply of these commissions. As with many other portraits from this time, Van Dyck sketched the head (and probably the hand) of the present sitter from life, directly onto the canvas, before his studio worked up the background and drapery. Van Dyck himself would then have retouched and finished these areas, completed the likeness, and added such details as the ruff. Indeed, one can see the penumbra around du Hot's head, indicative of where Van Dyck's initial sketch of the head and the background colour meet, as well as the development of the artist’s thought process in having changed his mind from picturing du Hot in a flat collar – just visible below the paint surface – to having him wear the finely-pleated ruff, brought to life with rapid, deft brushstrokes to create a convincing sense of volume. In the 2004 publication, Horst Vey speculated as to whether the sitter's single hand protruding from his clothing might originally have been intended to rest on a support, such as the arm of a chair, or the handle of a sword, which may be hidden beneath his cape.

This work is first recorded in the collection of Sir Andrew Fountaine, collector and amateur architect, at Narford Hall, Norfolk, where it remained for over 100 years. In his account of his visit to Narford, Waagen described the present portrait as 'very life-like' – a tribute as pertinent then as it is today.