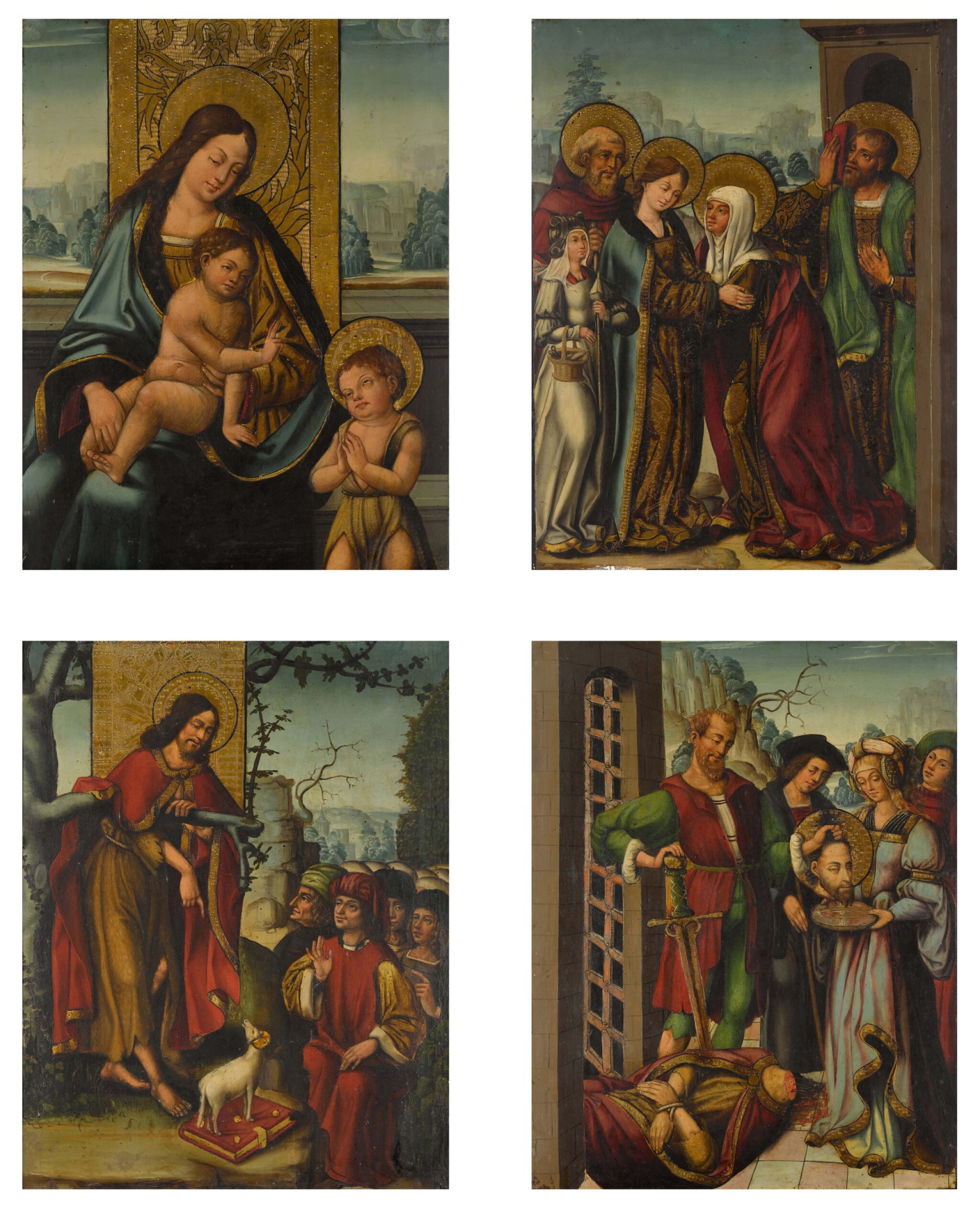 All four paintings appear to be in very good condition with no significant extent damage or loss of paint, with the exception of a very small number of old scattered wormholes. Each panel is formed of a single plank of wood with some worm damage at the extreme edges, but otherwise in stable condition. There is an old and slightly discoloured varnish over all four panels. Examination under ultraviolet light confirms the opacity and unevenness of the old varnish and surface dirt. There are no apparent signs of significant restoration or retouching with the exception of some very minor strengthening in the corners to a number of the panels. These paintings would appear to be exceptionally well preserved condition and would benefit from a light surface clean.

"Painted almost 500 years ago in Castile, in Spain, these exceptionally well preserved, colourful scenes are the principal panels from a once larger altarpiece (‘retablo’) dedicated to St John the Baptist. Like most Castillian paintings of this date, they are strongly influenced by Flemish art, but beautifully rendered details such as the gilded, punched and decorated brocade cloth of honour, draperies and halos, make them uniquely Spanish."

In excellent condition, this set of Castillian Renaissance paintings by Antonio Vázquez, who was active principally in Valladolid in the first half of the sixteenth century, are datable to the 1530s. The sole securely documented work by him of 1536 is an extant retable made for the Alderete family chapel in the church of El Salvador, Simancas, that serves as an important point of reference for stylistic comparisons with the present panels, which are thought to predate it. In 2000 Jesús Urrea published them as the work of Antonio Vázquez; and at the time of the 2011 sale, Isabel Mateo Gómez endorsed the attribution to this master on the basis of photographs. The panels, which all depict scenes from the life of Saint John the Baptist, would once have formed part of a large-scale retable, possibly flanking a central wooden sculpture or a larger painted panel.1 The ensemble also comprised several smaller panels, now dispersed, that were part of the banco. These were separated from one another at some point and have since lost their framing elements. In one of them, the presence alongside Saint Elizabeth of Hungary of a donor figure, perhaps a Franciscan nun, may indicate, as Post was first to suggest, that the altarpiece came from a convent of the order, probably in the area of Valladolid.2

2 Six other panels from this ensemble are known: St Francis of Assisi; The Lamentation; St Elizabeth of Hungary with a donor; Saint Christopher; The Adoration of the Magi (each 43.5 x 35 cm.); and an Immaculate Conception (dimensions not known; its square format suggests it may have formed part of the banco). These are discussed by Velasco Gonzàlez in London and Madrid 2019–20, pp. 168–73, no. 19; for reproductions, see Urrea 2000, pp. 12 and 14. Photographs in the Instituto del Patrimonio Cultural de España record the Immaculate Conception with the other panels when still in the collection of López Isar, Madrid, c. 1920–30, and subsequently with at least five that were later owned by Félix Valdés, Bilbao, c. 1940. By the time of the 2011 sale the Immaculate Conception no longer formed part of the ensemble.