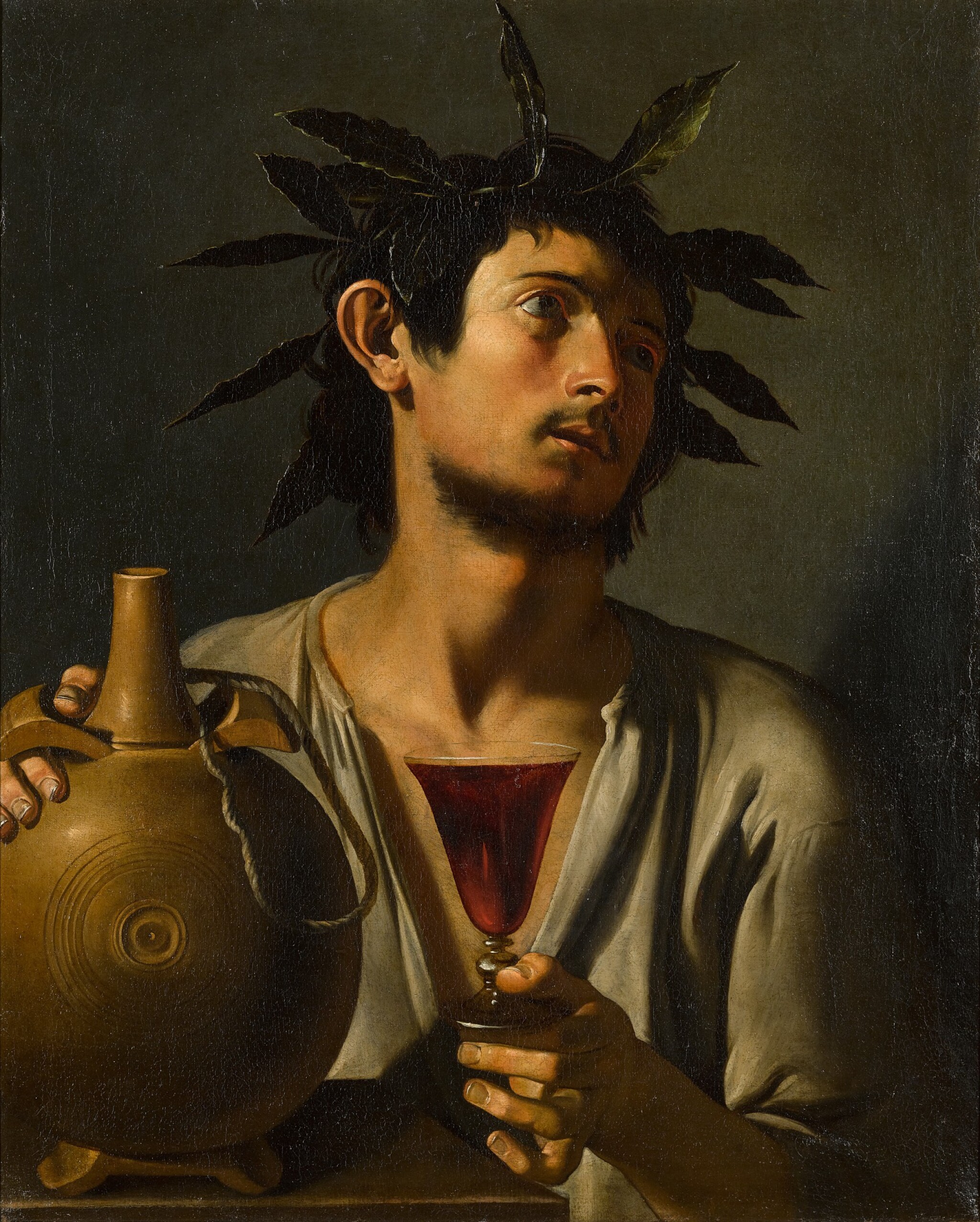 Rome [?], active first half of the 17th Century

PORTRAIT OF A YOUNG MAN AS BACCHUS

"Depictions of Bacchus are frequent in the field of Old Masters, but very few present us with such a handsome model, nor such an elegant jug. Stripped of the ribald retinue and noisy confusion which usually accompany him, this Bacchus strikes me as having a refined palate, and is unquestionably interested in the finer things in life."

The attributes displayed by the young protagonist are linked in classical tradition to representations of the god Bacchus: the flask and glass of wine, naturally, but also the crown of laurels, which is more frequently associated with the figure of Apollo, but which here refers to the connection between the frenzy induced by wine and artistic creativity, a connection clearly referenced by the mythographers of the time.1 Here we have, therefore, yet another eloquent example of Dionysian iconography by one of Caravaggio's followers, clearly inspired by the youthful prototypes painted by Caravaggio himself, such as the so-called Sick Bacchus in the Galleria Borghese in Rome, or the later Bacchus in the Uffizi. The ambiguous and sensual nature of the god of wine were certainly not foreign to the free and more often than not intemperate lifestyle of the followers of the Lombard master. Moreover, by virtue of the subject matter, the painting fits perfectly within the well-stocked body of Roman paintings on a Bacchic or more generally rustic theme, which in the past were mistakenly believed to be by Tommaso Salini, following the testimony of Giovanni Baglione, who ascribed to Caravaggio’s infamous competitor a pioneering role in the development in Rome of the genre of still-life painting.2 The most representative example of this nucleus of works, and also the one which is closest in style to the present work, is without doubt the now celebrated Young peasant with a flask in the Museo Nacional Thyssen-Bornemisza, Madrid (fig. 1); Federico Zeri had indeed proposed the hand of Salini for the substantial still-life elements, and that of another artist, Michelangelo Cerquozzi, for the figure.3

The corpus of works that over time has grown around the Madrid painting, which, beginning with Vittoria Markova’s contribution to the field, has been ascribed entirely to the hand of Salini,4 surely represents one of the most intricate problems relating to the large constellation of Caravaggesque artists. In the past few years, Giovanni Papi has undertaken what might be described as a surgical campaign of attribution to distinguish the various anonymous hands such as the ‘Maestro degli Armenti’, the ‘Maestro del Bacco’ or the ‘Maestro di Baranello’ and, most recently, the ‘Maestro of the Lampronti Flagellation’, the latter after the current owner of a Flagellation of Christ (which appeared at auction with Pandolfini in 2015); it is to the latter artist that the scholar rightly ascribes also the painting in the Thyssen-Bornemisza collection.5 Common to these works are the facial types, with their slightly astonished expressions, and the almost rubbery softness of the surfaces; the fashioning of the fingers and limbs, which are almost tubular in shape; and the tendency to outline the anatomical features with shadow, in a non-naturalistic way.

There is no doubt that the latter artistic identity reconstructed by Papi, that of the ‘Maestro of the Lampronti Flagellation’, has an internal consistency, and has some of the most significant works of the series ascribed to him – such as, for instance, the lost Lepke Bacchus (fig. 2). However, in the absence of any solid anagraphic or chronological evidence, it will remain under discussion as to whether the identity of this artist is truly distinct from all the other masters in the ‘Pseudo-Salini’ group, or if it is not the case rather, in the instances of the works with the closest connections, of different moments in the career of a single artist. Therefore, even the use of the label ‘Maestro of the Lampronti Flagellation’, centred, what is more, around a work which is not fully representative from an art-historical and critical point of view, is of limited use for the solution of this thorny and fascinating Caravaggesque problem.

2 G. Baglione, Le vite de’ pittori scultori et architetti […], Rome 1642, p. 288: ‘The Roman Salini began to paint flowers and fruit, and other things from nature, well; and he was the first to arrange flowers with their leaves in vases, with many strange and unusual inventions, which were to everybody’s taste, and executed with [such] great genius and skill that he was able to earn very well.’ (‘Salini Romano si mise a far de’ fiori e de’ frutti, e d’altre cose dal naturale ben espresse; e fu il primo che pingesse et accomodasse i fiori con le foglie ne’ vasi, con diverse invenzioni molto capricciose e bizzarre, li quali a tutti recavano gusto, e con gran genio sì bravamente li faceva, che ne ritrasse buonissimo guadagno’). Salini’s production of figures however, linked principally to the altarpiece with Saint Nicolas da Tolentino in the chapel of that name in the Roman church of Sant’Agostino, to the lost Saint Agnes freed by an Angel once in Sant’Agnese in Agone in the same city (known only through photographs), and to the double-sided banner dedicated to the Four Crowned Saints, which is in a private collection and originally was housed in the now destroyed church of Sant’Andrea in Vincis again in Rome, appears to be incompatible, as well as more archaic, when compared to the catalogue of works brought together around the Thyssen-Bornemisza painting.