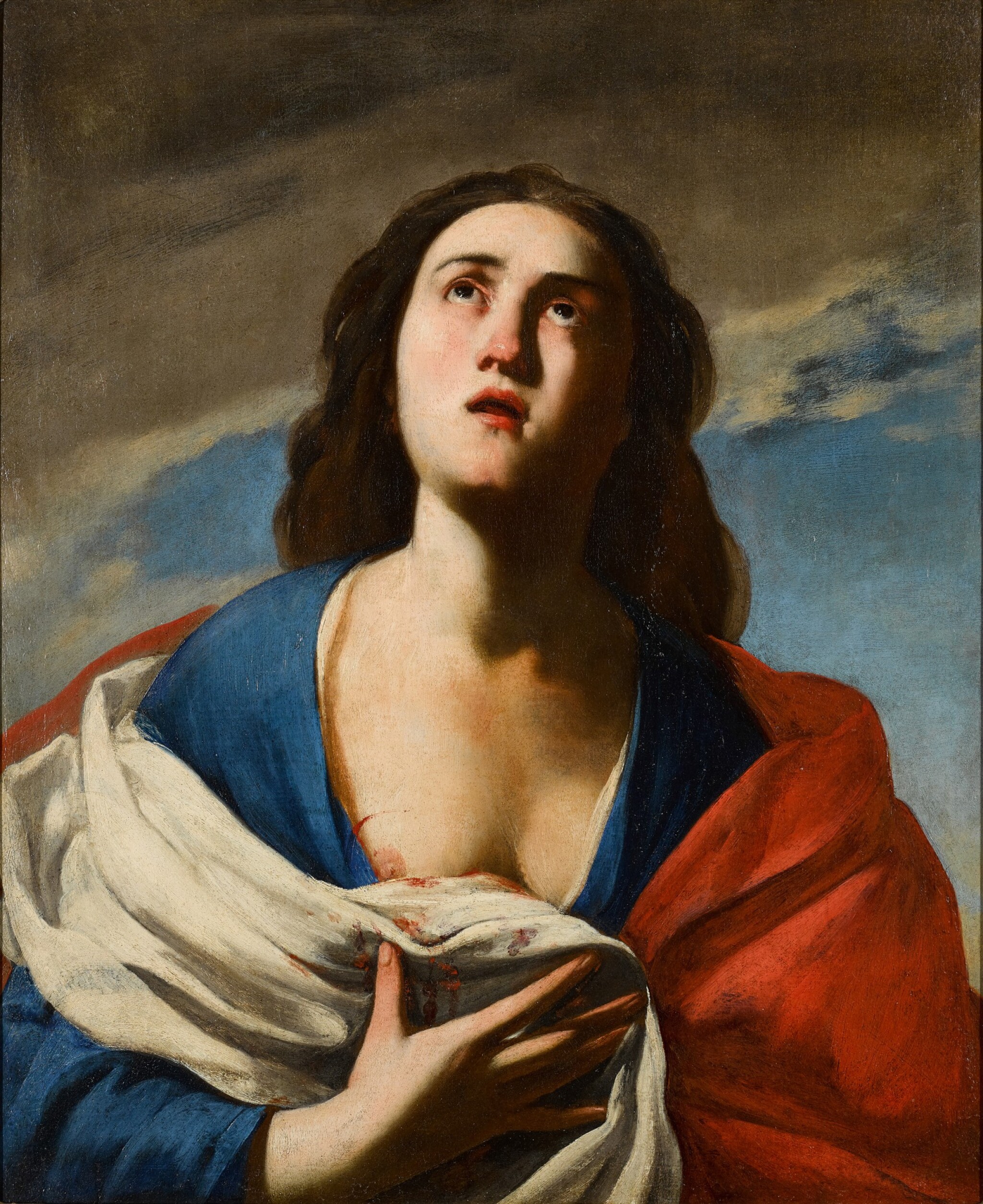 The canvas has an effective reeling which has not flattened the clean paint surface, which retains its texture and vibrant colours. The good condition is confirmed by inspection under UV light which reveals very minor scattered retouchings.

"Stanzione's arrival on the artistic scene in Naples marks a significant turning point in that school's artistic development for he helped reintroduce a rich colour palette that had been conspicuously absent in the immediate wake of Caravaggio's sojourn in the city. The starkness and directness of Caravaggio's acolytes made way for a warmer approach which, in Stanzione's case, as we see here, was so successful by inspiring empathy rather than shock."

There is no doubt that the depiction of female half-figures to denote martyrs or heroines from the Old Testament, mythology, or history, via the use of a simple attribute, is, if not an outright invention by Stanzione, certainly a trademark of his. This formula would enjoy considerable fortune among Neapolitan artists, especially among those masters who are thought to have gravitated around Stanzione, such as Francesco Guarino, Pacecco de Rosa, Onofrio Palomba, along with Bernardo Cavallino, Andrea Vaccaro, and others. In any case, this tender image of Saint Agatha, unmistakably identified by the wound on her bosom, is a striking and mature example of how Stanzione strove to bring out deep emotional content.1 Unknown until now, the present painting bears eloquent witness to how – as Maurizio Marini observed – ‘his often bitter or melodramatic imagination, more than that of any other artist, enlivens Cavallino’s genius’, as is evident from comparison with the latter’s Saint Agatha in the York Art Gallery (fig. 1).2 Marini also noted that in the Saint Catherine of Alexandria, once held in the Lemme collection (fig. 2), the saintly figure was ‘tranquil, carnal, amiable, in serene communion with an entity that was transcendental, yet domestic’.3

The ex-Lemme painting appears to offer a valid point of reference, both stylistically and chronologically for the present Saint Agatha, which is datable to the 1650s. Here too the drama of martyrdom is accentuated by the purity and luminosity of the colouring, where only the storm cloud in the background, ‘like an ashen blast from Vesuvius, adds a note of anguish’. Though recorded on several occasions under Stanzione’s name in 17th-century inventories, this subject, as a half-length figure, is seldom found in the painter's extant corpus. Besides the present painting, mention is due at least to the version, similar in format, that was once in a private collection in Madrid,4 and another, in the Museo de Bellas Artes de Valencia, more intensely Caravaggesque in tone, which until now has not received adequate attention in critical literature.5

1 Recent cleaning of the painting reveals that the artist had some second thoughts about the positioning of the saint’s right nipple.