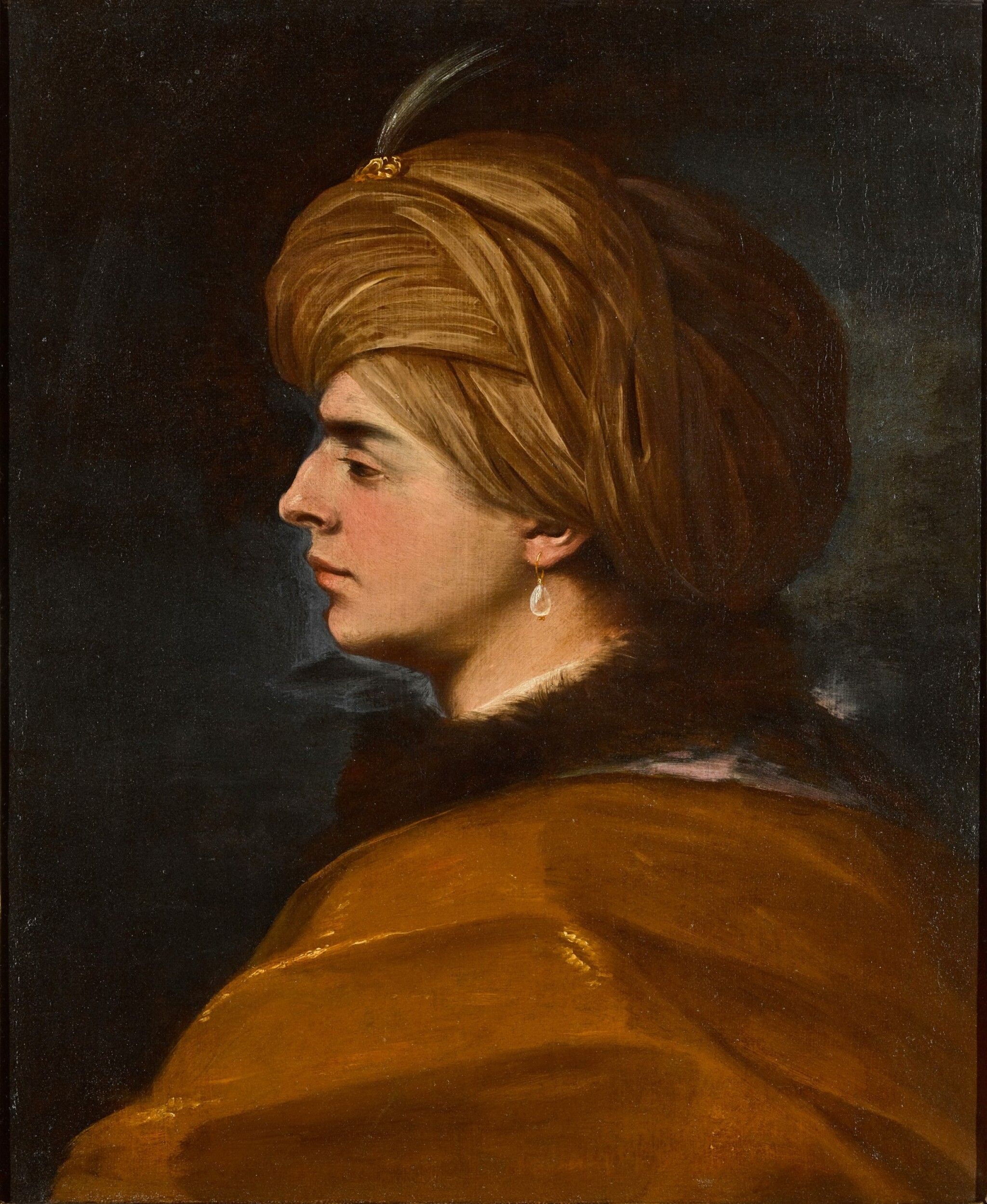 PROFILE OF A MAN WEARING A TURBAN

The canvas is relined and stable. The paint surface is in generally good condition. There are several restored damages to the background: a cross-shaped restoration to the left of the turban (10 x 15 cm); a diagonal restored tear towards the upper left corner; an S shaped restored tear below his chin; and an area of restoration on the left edge of his cloak. There are various re-touchings and restorations around the extremities on all four margins, particularly in the lower right corner. The painting has been expertly restored and requires no further attention.

"Mola seems to have been drawn to oriental figures, and the exotic more generally, throughout his successful career, his single figures often portrayed as elegant outsiders. Perhaps this man was a Turkish emissary passing through Rome; certainly his pearl earring suggests he was a man of some preaching."

This bust-length portrait, seen in profile and turned to the left, of a young oriental man wearing a turban was painted by Pier Francesco Mola. The sitter wears a pearl earring and on top of the turban we see a gold brooch with a feather (a pennacchino). He wears a dark fur dress and over it golden olive-brown drapery. The face is set against a dark-bluish background. The face and the golden coat are lit from the left. The picture was executed circa 1650-55, when Mola was influenced by the art of Salvator Rosa.1 However, since quite differing dates have been proposed for various comparable pictures, it might be cautious to give a wider date range from circa 1650 to 1660. The streamlined, slender, slim and very elegant features of the face, the fluency with which the folds of the turban and the golden brown coat are rendered, suggest, in my opinion, a dating in the first half of the Fifties and not for a later dating in the early Sixties.

We find young men wearing turbans as secondary figures in paintings depicting the Preaching of Saint John and the Preaching of Saint Barnabas, but also in "quadri da stanza" depicting scenes from Tasso (Erminia and Vafrino cure Tancredi, Paris, Louvre). There are also portrait or genre studies of men of different ages, wearing a turban, as single figures, mostly bust length or half length.2 Most of these figures are dated by Francesco Petrucci in his 2012 catalogue raisonné to circa 1650-55 or 1650-1660. A figure with quite similar traits to the present sitter, although bearded and not in profile, is the young man of roughly the same age, with a turban, who appears in the background of the Preaching of Saint John in Rome, Gallerie Nazionali d'Arte Antica, Palazzo Barberini, formerly (from 1919 until 2009) on loan to the Italian Embassy in Madrid. The picture was correctly recognised as by Mola by Francesco Petrucci in 2004.3 Petrucci (2012) dates the picture circa 1660-62, a date which I find too late.4

The picture is quite close in spirit (vaguely close to Salvator Rosa) to the three lunette frescoes in the Chiostro Grande in S. Maria della Quercia near Viterbo, documented and paid for, from September 1650 to January 1651,5 and I find it also close to the aforementioned Oriental Warrior in the Louvre, dated 1650. One might even think of the altarpiece in the Costaguti chapel in SS. Domenico e Sisto in Rome, the Vision of San Domenico in Soriano of 1648 or the figures in the Presching of Saint John the Baptist in the Museo Thyssen-Bornemisza in Madrid (fig. 1)6

Adapted from a text by Professor Erich Schleier