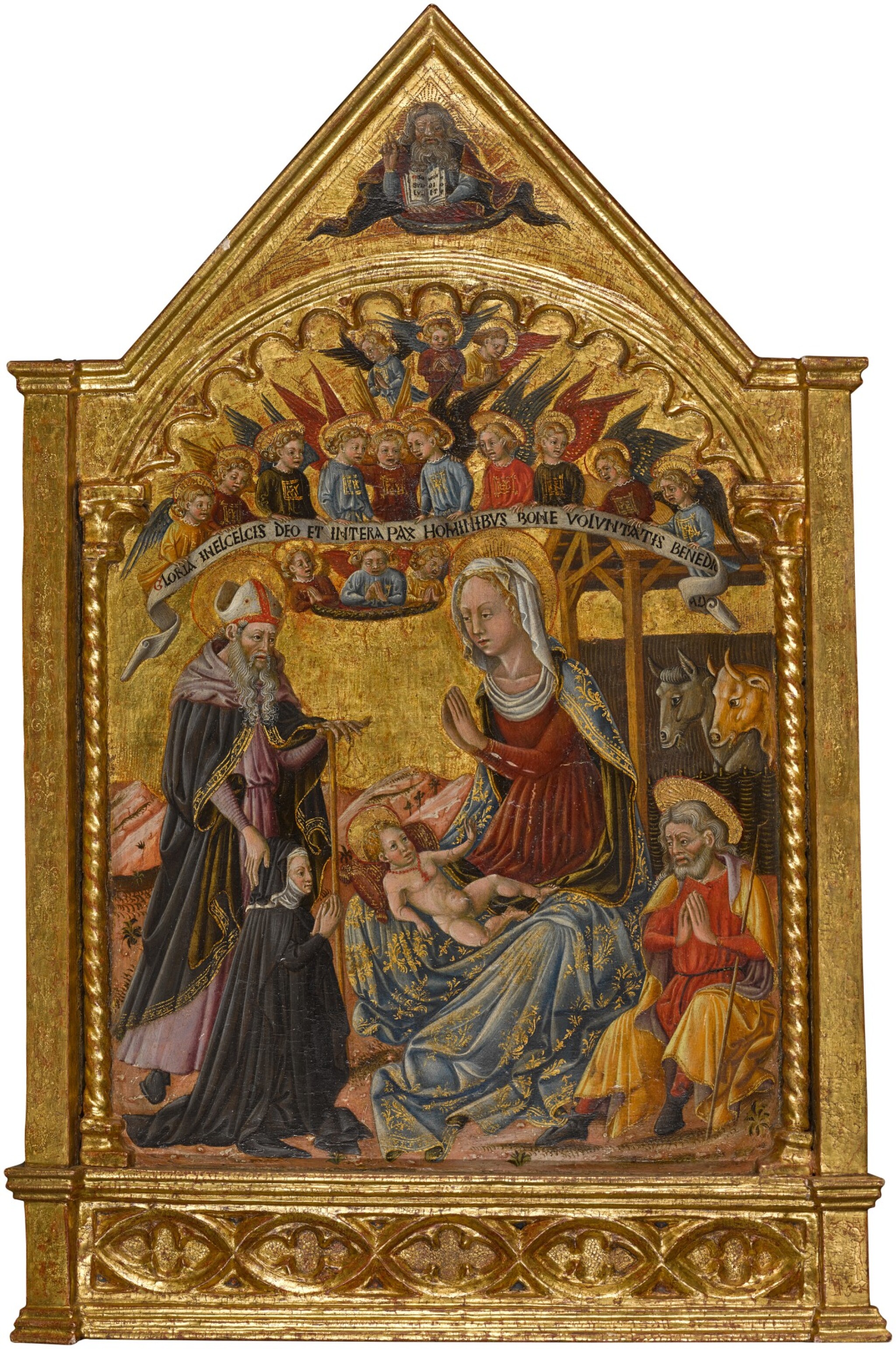 MASTER OF THE ANCONETTE FERRARESI

Active in Ferrara in the mid-fifteenth century

THE NATIVITY, WITH SAINT ANTHONY ABBOT AND A SUPPLICANT

tempera on panel, gold ground, in an engaged frame

"This charming panel exemplifies the Sarti Gallery's interest in and promotion of the lesser-known centres of the Italian Renaissance. While Florence and Siena were the undoubted dominant forces in the development of Italy's visual arts, too often their influence has overshadowed other cities and schools. Ferrara was an important city state, ruled by the Este dynasty since 1264, and its busy court stimulated a febrile artistic milieu which was to flourish until well into the seventeenth century. The white and gold highlights which shimmer throughout this busy picture give it an unusual radiance."

The hand responsible for this Nativity also painted another anconetta showing the Virgin and Child with Saint Bernardino of Siena, formerly with the Sarti Gallery (fig. 1). That work had been studied by Professor Andrea De Marchi, who recognised its Ferrarese origin and suggested a dating in the 1460s, noting its affinities with painters ‘who were more rooted in the Renaissance like Antonio Cicognara’ and the Pseudo-Scazoli (or Pseudo-Zoppo, for Carlo Volpe), ‘both from Cremona, who were trained in Ferrara, or an illuminator from Borso d'Este like Franco de' Russi’.1 The Ferrarese connection suggests the black-robed monastic donor could be identified as the the abbess of the Ferrarese nunnery of Sant'Antonio in Polesine, seen here being presented to the Madonna and Child by Saint Anthony himself. Both panels are handled with the same dense, slightly waxy pigment, and share the same ruffled, abundant drapery that wraps around the figures, their faces pointed and wide-eyed. In both paintings, the Virgin is robed in red velvet, its material distributed in tubular swellings, under an almost identical brocaded mantle, enlivened by ample loops and the heavy fall of drapery over the right leg, rising in a curved wave over the ankle and concluding as it twists under the indentation of the foot. The cheeks and furrowed brows of both Bernardino and Anthony are touched by subtle highlights, which give a lively touch to the hair around the Franciscan’s tonsure and the long beard of the hermit saint. The aquiline profile of Saint Joseph in our Nativity is akin to the slightly more hooked features of the Christ Child in the panel with Saint Bernardino, which is in turn very close to the plump faces in the present row of little Angels, painted with a looser, freer brushwork, and where one can once again note the detail of little brushstrokes of white lead accentuating the lips and noses.

A third panel should be added to these Ferrarese anconette: a Virgin and Child, with Saints Anthony of Padua, Louis of Toulouse and Francis presenting Bernardino da Siena, published at Carlo Volpe’s suggestion by Serena Padovani among the late works of the Master of the Imola Triptych (fig. 2; its whereabouts unknown). This is a small and delightful manifesto of propaganda for Bernardino, with the Sienese saint being admitted to the Olympus of Franciscans before Christ and the Virgin, who insist he take the monogram. The work can plausibly be dated not far from the holy man’s canonisation in 1450, some years before the date around 1460 proposed by Padovani, who rightly saw in its ‘solid spatial planning’ echoes of the ‘complex Ferrarese culture of Borso’s era’.2

The earliest work by the Master is probably the Crucifixion, formerly in Bestagini collection, which was auctioned in New York in 1995 with an attribution to the Master of the Imola Triptych, the probable Antonio Orsini, to whom Serena Padovani has compared it.3 Its inclusion in Orsini's catalogue should be reconsidered: in this work, too, a greater solidity of form, the broken, chipped drapery folds, and a more sincere description of sentiments, reach a higher level than that of the Imola Master, and seem to presuppose a careful meditation on the work of Giorgio d’Alemagna.

Adapted from a text by Dottor Emanuele Zappasodi.

3 Christie’s, New York, 5 October 1995, lot 104. This work, too, was published by Serena Padovani at the prompting of Carlo Volpe.