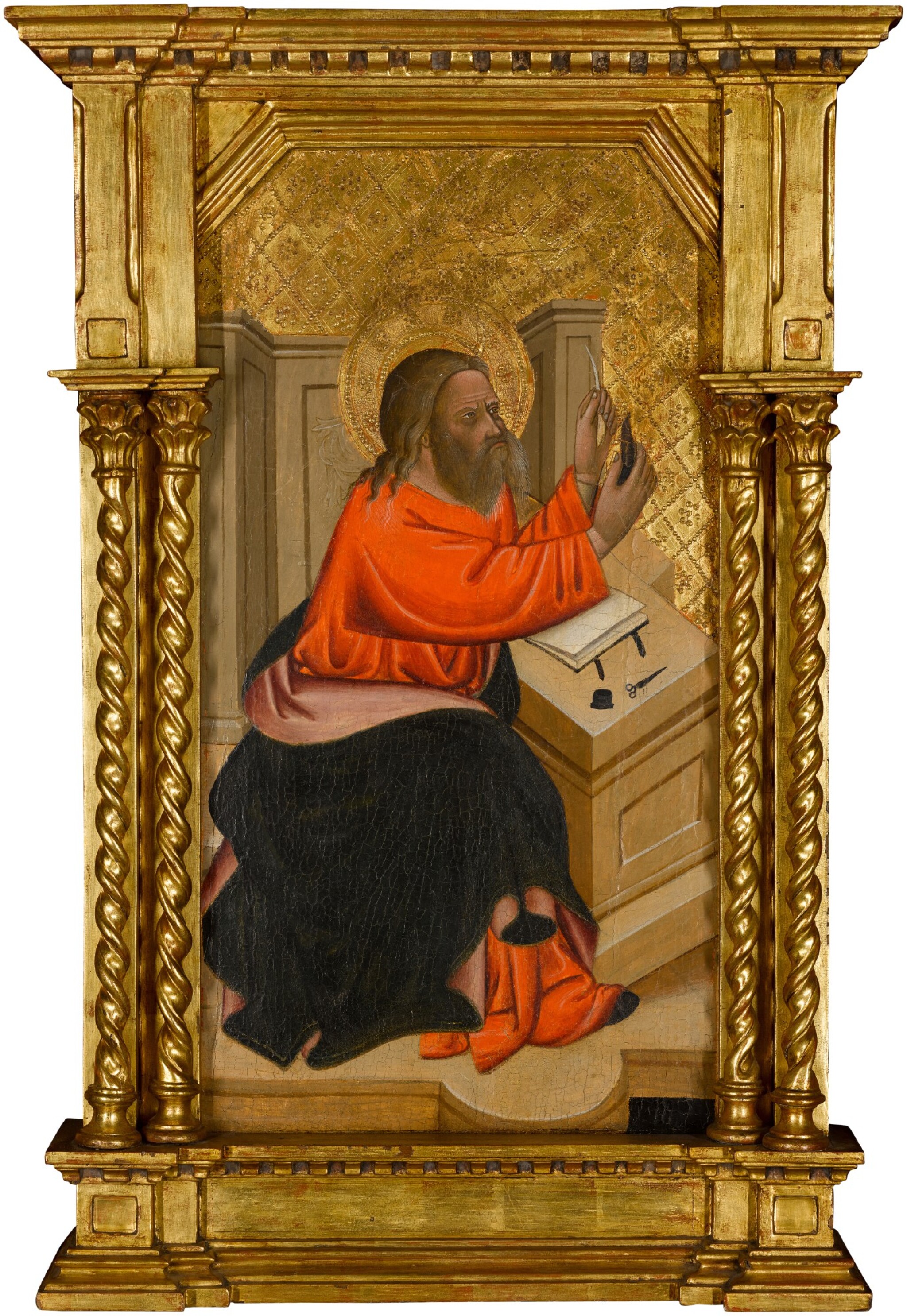 AN EVANGELIST SHARPENING HIS QUILL

Offered in a later frame in style. The reverse of the flat panel is consolidated by 4 horizontal battens. The paint surface is overall in fair condition, with some wear in the gold. The blue of the figure’s robe has oxidised and is now almost black. The old split which runs vertically 10 cm from the right edge has been restored. Inspection under UV light shows the restoration along the split as well as some scattered retouchings. Some more concentrated retouchings fluoresce in the blue robes and along a well restored crack lower right.

"Even evangelists found work a little tiresome at times, or so Cecco's depiction of the figure would have us believe. The highlight of the picture for me is the delightful punchwork decoration in the halo and in the gold background."

A quite imposing figure, looking irritated and draped in his apostolic garments, is painted sitting at his desk, sharpening the tip of his quill. On his desk lie an open book, still unblemished, with two manuscript clasps, a small pair of scissors and an inkwell. The identity of the saint, obviously one of the four evangelists, was probably indicated by an inscription on the lower edge of the original frame. It is not uncommon to find a depiction of an evangelist holding his pen in the air with a theatrical gesture, or even blowing on his ink to dry it, like the St John the Evangelist painted by Taddeo Gaddi for the gable of a polyptych in San Giovanni Fuorcivitas in Pistoia (private collection, Milan). However, it is rare that he be caught in a daily gesture such as this. The clear outlines and the rejection of three-dimensional rendering of space characterize the last artistic phase of Cecco di Pietro – a sort of Orcagna of Pisan painting – who would appear to be the author of this work. It can be compared to a panel of the same subject in the North Carolina Museum of Art in Raleigh,1 representing St Jerome in his study, with a similar cubist approach to the architecture (fig. 1). The simplified definition of the volumes is very abstract, but one should notice the fillets of light that follow the relief, the intentional differentiation between the ochre of the dais and the desk and the grey-green of the back, and even the illusion of a foliate relief in the middle of the panelling behind the saint. Cecco di Pietro had worked around 1370 with Francesco Neri da Volterra and assimilated his taste for full and dilated volumes. The grumpy expression that is set on the face, with a piercing glare, may have been subsequently influenced by the works that Antonio Veneziano left in Pisa during the penultimate decade of the century and which, with their grandiose neo-Giottesque character, influenced other painters, like Angelo Puccinelli from Lucca.

The moderate mannerisms with which the white highlights are articulated on the carefully delineated wavy curls of hair or on the crests of the drapery are typical of Cecco: we see here these kinds of comma shapes characteristic of his style, combined with finer brushstrokes that resemble scratches, like those visible on the shoulder of the evangelist. A similar technique can be found just as easily in the aforementioned St Jerome in Raleigh, as well as in the predella panels from the Agnano polyptych (Museo Nazionale di San Matteo, Pisa; fig. 2).2 With regards to the drapery, one notices the unusually strong mannerisms, in particular the lower extremity of the cylinder-shaped folds that appear to correspond to the little jutting out semi-circular part of the dais. After 1386 Cecco took up a more flamboyant Gothic style: this last evolution is revealed in the frescoes of one of the San Martino’s chapels, Pisa, datable around 1395, which were attributed to him by Enzo Carli,3 or in other works of a more familiar and liberal style, like the Virgin of the cherries from the Musée des Beaux Arts in Tours.4

It was also at this time that experimental work on the gold ground of this panel was done. The picture, executed on a finely planed, vertical grained larch plank, presents a gold ground whose original trapezium-shape,5 later modified, corresponds to the design of the later frame. The gold leaf is worked in an oblique pattern with a wide mesh, obtained with lines of punches, inside which are seven-petal rosettes also made with simple punches, that are identical to those in the halo.

Because of its dimensions and format, this picture cannot be the lateral panel of a polyptych: it is not tall enough and too wide. It was probably part of the upper register of a large polyptych, crowned with a supplementary series of pointed panels, positioned on the upper narrowed part. This evangelist is turned towards our right and the architecture of his study is also constructed with a lateral installation. It is likely that he was part of a series of the four evangelists and that he was therefore on the left. The placement of such a series of four in the upper register of a polyptych is quite common. It is less frequent, however, that the evangelists should appear not in half-length, but full-length. Unfortunately it is not for the moment possible to link this panel to other known works, but it is worth remembering that many documented works by Cecco di Pietro appear today to be lost.

Adapted from a text by Andrea De Marchi