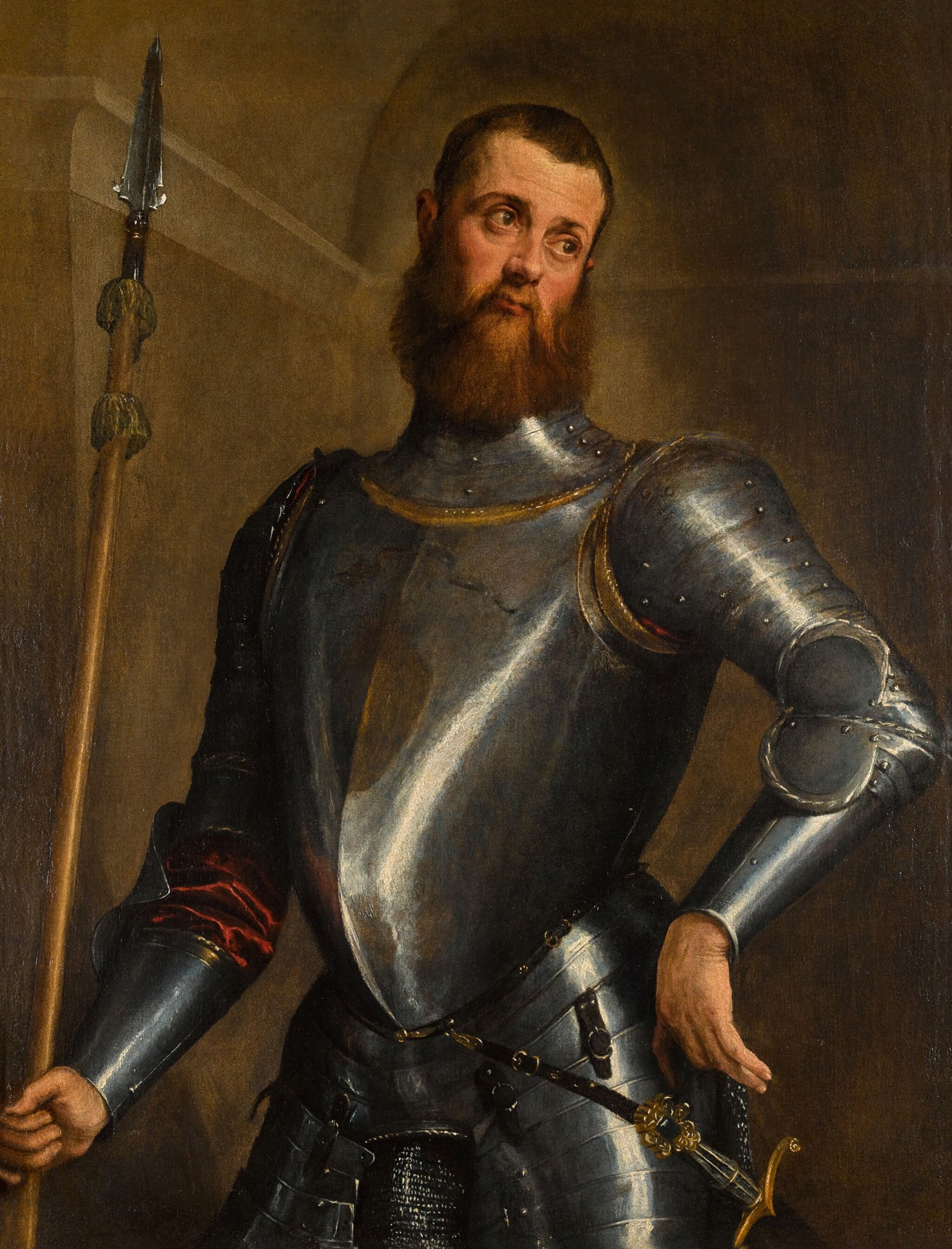 PORTRAIT OF A MILITARY COMMANDER IN ARMOUR, THREE-QUARTER LENGTH, WEARING A BROADSWORD AND HOLDING A PARTIGIANA

The canvas has a firm relining and the weave has become more visible, particularly in some areas of the background and in the sitter's beard. The paint surface is clean and the varnish is clear and even. Inspection under ultraviolet light reveals spot retouching throughout the sitter's hand, face and parts of his beard, as well as scattered in his armour, where there is also some strengthening in parts of his belt. In overall good condition.

"How satisfying to be able to offer for sale a rare portrait by this great master, as opposed to one of his more frequent pastoral or religious scenes. This warrior is strong and confident, his shiny armour and sword a reminder of his battles past and future. And yet there is an inescapable vulnerability and introspection here, and these elements make the work all the more striking."

A rare portrait by Jacopo da Ponte, called Bassano, this magnificent canvas is an important addition to the painter’s œuvre. Bernard Aikema dates the present work to circa 1554, aligning it chronologically with the artist’s Portrait of a Bearded Man in the J. Paul Getty Museum, Los Angeles (inv. no. 69.PA.25), completed four years earlier (fig. 1). Though here the sitter is shown half-length rather than head and shoulders, the angle of the head, the melancholic expression and rounded, watery eyes cast away from the viewer, instantly recall the Getty picture. Beverly Louise Brown suggests a later date for the painting of circa 1560, noting that its sophisticated architectural setting looks forward towards his Saint Jerome Emiliani in prison in the Palazzo Rosso, Genoa (inv. no. PR 96), which dates from the mid-1560s. Bassano here convincingly conveys the personality of the unknown sitter; his gaze, averted from the viewer, is distant yet attentive, fixed on an object or person out of view, his eyebrows raised slightly in concentration, drawing faint lines across his forehead and temples. The expert handling of light, applied in touches of white to form sparkling flashes on the breast plate, sleeve and hip serves not only to interpose the otherwise subtle tonality of the picture but is used to naturalistically indicate the minutely dented surface of the hand beaten metal. The flesh and beard are vivacious and warm against the minimalist background and the rich crimson doublet, exposed at the crook of his elbow beneath the vambrace, provides contrast to the dark metal and cool architectural walls.

Though perhaps better known today for his characterful religious and genre scenes, we know from Bassano’s biographer, Carlo Ridolfi that portraiture was also an important part of his output: ‘Fù egli non meno valoroso nel far de’ritratti, riducendoli al naturale, essendo avvezzo à cavare le cose dal vivo…’.1 Ridolfi’s list of sitters is woefully short however and the artist’s only surviving account book, known as Il Libro Secondo, is but one of the four original volumes and casts no light on the portraits from the latter part of his career. When the painting was cleaned, it revealed decoration on the center of the breastplate, showing a snarling lion, which may at one point have formed part of a coat-of-arms which may have assisted in identifying the figure, but is now illegible. A certain amount can be deduced however from other elements of the sitter's costume: rather than the decorative armour worn for tournaments and often shown in Venetian portraiture, the sitter here wears field armour; his left hand gracefully resting on his hip draws the eye to the ornamental hilt of his broad sword; and in his right he grips a partigiana, a ceremonial spear traditionally carried by the prince’s Guards of Honour. The fire-gilded decoration, ceremonial spear and ornate sword suggest the sitter was no ordinary infantryman but a man of considerable means and perhaps a Field Captain or Guard of Honour serving the Serenissima.

We are grateful to Dr Bernard Aikema for attributing the painting to Jacopo Bassano following first-hand inspection, and to Dr Beverly Louise Brown for her assistance with the cataloguing.

1 C. Ridolfi, Le Miraviglie dell’Arte, D.F. von Hadeln (ed.), Berlin 1914, vol. I, p. 401, translates: 'He was no less valued for his portraits, they were naturalistically rendered, [Bassano] being accustomed to drawing things from life…'.