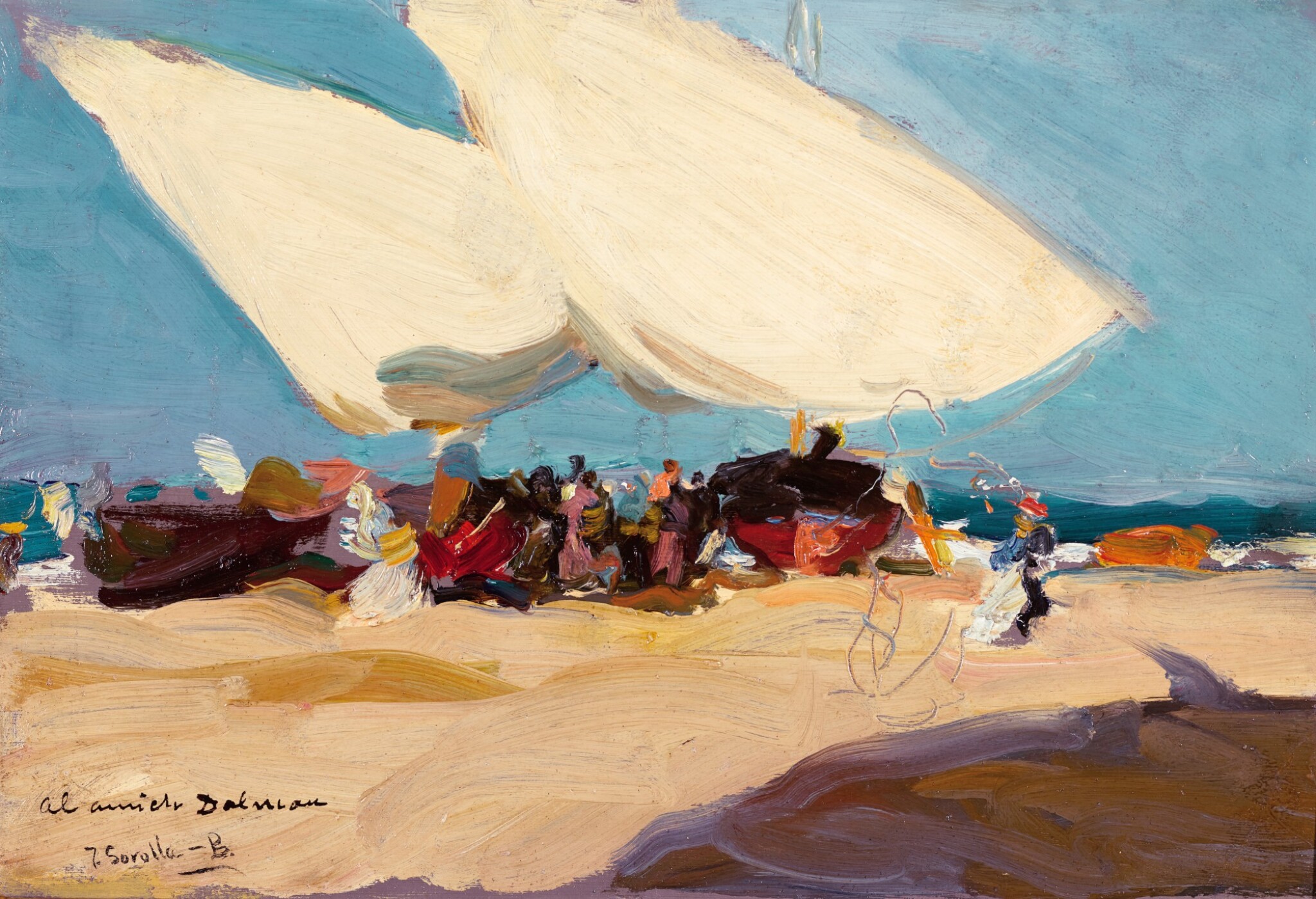 The artist's board is flat, even, and ensuring a stable support.

Inspection under ultraviolet light reveals some small scattered spots of cosmetic retouching, notably in the sky and in the big sail in the centre of the composition. A small, diagonal line is also visible in the lower right corner, possibly addressing an old folding line.

Otherwise, this work is in very good condition and is ready to hang.

Josep Dalmau (a gift from the artist; Dalmau, 1867-1937, was the owner of Galeries Dalmau in Barcelona, a leading gallery promoting avant-garde art in Catalonia at the time, who would later represent Salvador Dalí);

"With my coastal upbringing Sorolla’s beach scenes are, for me, some of the happiest images in art. Here, the clarity of light and colour is interrupted only by the violent flapping of the huge sails in a strong coastal breeze, which is exacerbated in this small oil by the immediacy and speed with which it is painted."

Sorolla probably painted this work in the summer of 1904, while working on El Cabañal beach in Valencia. The freedom of execution and liveliness of spirit exemplified in Barcas y pescadoras are qualities that go to the heart of Sorolla's aesthetic and account for his enduring popularity.

1904 was a key year for the artist, as Blanca Pons-Sorolla comments: "During the latter part of the summer of 1904 and well into the autumn Sorolla stayed in Valencia with his family... There he began work on some of his most important beach scenes including Verano (Summer) ... It was the large format compositions that included the widest possible range of Sorolla's Valencian motifs for which there was the greatest demand, compositions that included children, fishermen, oxen, boats, billowing sails, the surge of the sea, a towel blowing in the breeze."

Until then Sorolla's international reputation had been formed largely through his depiction of the Valencian fishing community. This had been triggered by his success at the Paris Salon of 1894 when La vuelta de la pesca (Bringing Home the Catch) (Musée d'Orsay) had been awarded a medal and acquired by the French State to hang in the Luxembourg Palace. Over the next ten years Sorolla recorded with increasing verve and realism the local fishermen's working lives, be they striving against the elements to land their haul, mending their nets on the beach or relaxing on board their boats. Sorolla realised the apogee of this genre in 1903 when he completed the large-scale canvas Sol de la tarde (Afternoon Sun).

If Sol de la tarde was the culmination of one genre, however, his work from the summer of 1904 announced Sorolla's new direction, his empathy with the local fishing community transformed into a wider artistic vision. At a domestic level this was a consequence of both achieving financial success as a painter, and his inclination to draw inspiration for his work from his young family whom he watched blossom and flourish by his side. At the end of the year Sorolla was to move with his wife and children to a new and significantly improved house and studio in Calle Miguel Angel 9 in Madrid, and over that summer he embarked on an especially vigorous painting campaign that delighted in the depiction of children.

But beyond his interest in his wife and children, it was his aspiration for Valencia and the whole of Spain that fueled Sorolla's drive to paint. In nurturing these larger hopes he was pragmatic. Writing later in the decade from America he noted: 'We have the modern Spain now, with its roads and wireless telegraph... Spain having lost her colonies must develop her own great resources and compete in the markets of the world' (quoted in Carmen Gracia in The Painter Joaquín Sorolla, exh. cat., London 1988, p. 43). For its part Sorolla hoped that Valencia would stimulate and direct the renaissance of the whole of Spain. 'One of my most cherished hopes,' he declared, '...is that in the longed-for resurgence of my country Valencia will take the lead in the industrial and artistic movement, as befits its brilliant tradition and its inborn artistic temperament.' (Gracia, 1988, p. 44).