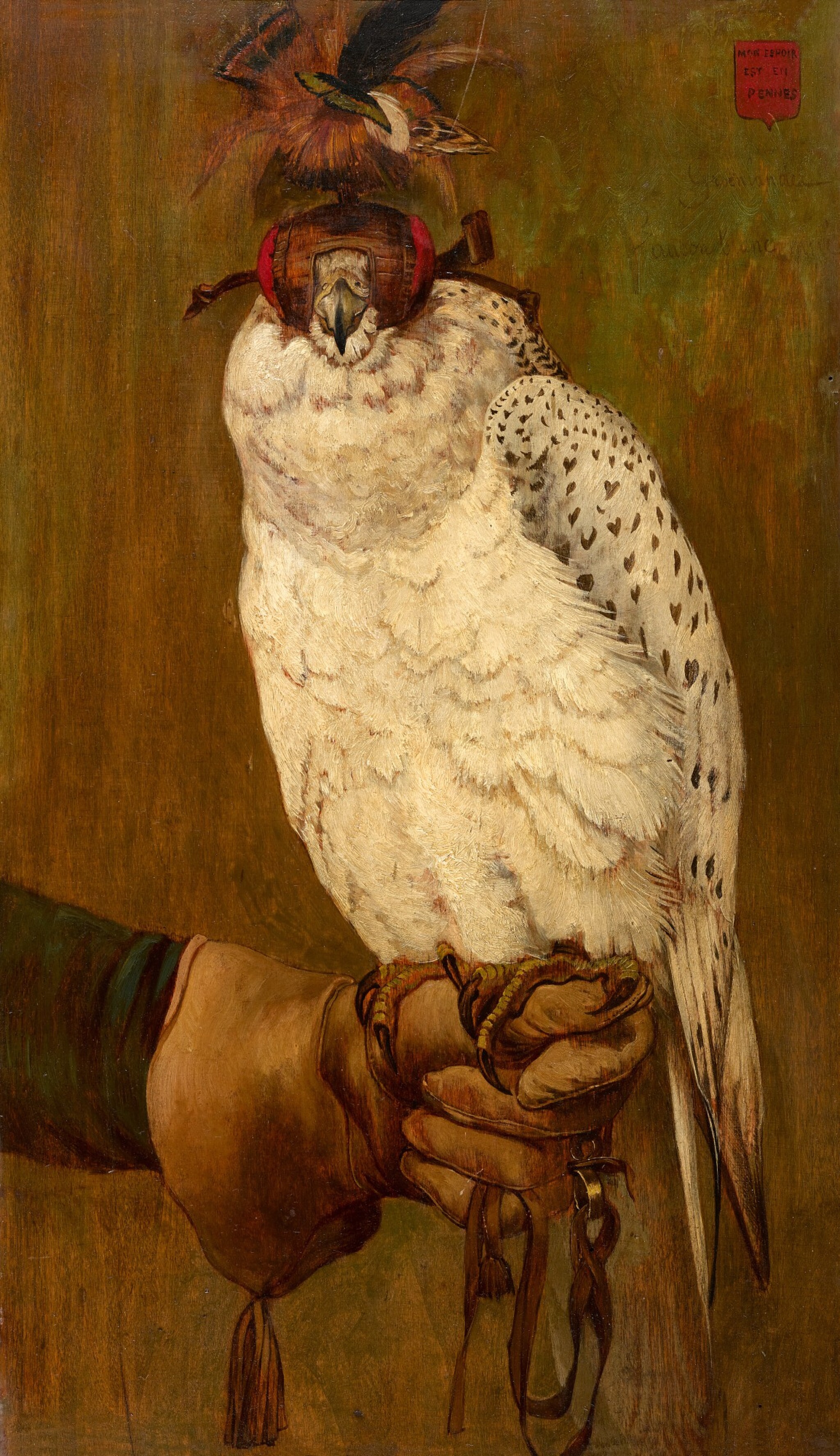 PORTRAIT OF A HOODED GYRFALCON, PERCHED ON A GLOVED HAND

The panel is uncradled, flat and stable, with slight bevels on all four edges.The paint surface is clean and the varnish very slightly discoloured. There are a couple of scratches in the surface of the wood (present before paint was applied): two horizontal indentations in the centre, one through the body of the falcon (17 cm. long), the other through the wrist (15 cm. long); two short superficial scratches to the paint surface are found in the background to the left of the falcon's head (3 cm.), and just to the right of its head (6 cm.). Inspection under ultraviolet light reveals a rather opaque varnish, but seemingly little to no intervention, and the painting is in overall good condition.

"This painting has a personal appeal to me, because I took a course on ornithology in college, and the professor was a breeder of Peregrine Falcons. The Peregrine is the fastest bird of prey on the planet, with a stoop (diving speed) of over 200 miles per hours. These are sleek and beautiful birds, and my professor managed to introduce them into the population of animals in Manhattan. After the elimination of DDT, these birds could prey on small rodents without the absorption of poison and the consequent deterioration in the strength of their eggs. Ever adaptable, breeding pairs can still be spotted on window ledges around Central Park.

The noble bird represented in this painting is not a Peregrine Falcon but a larger relative, known as the Gyr Falcon or Greenland Falcon, a magnificent beast who is amenable to human company and human commands, such as hunting in the wild and returning to roost on a gloved hand."

The gyrfalcon is an Arctic bird of prey and the largest true falcon in the world, perennially highly-prized by falconers and at the apex of the hierarchy of such creatures. In the Middle Ages gyrfalcons were considered a royal bird, and only a King, according to the Book of Saint Albans (the treatise on hawking, hunting and heraldry, printed in 1496), was allowed to hunt with one. The position of the falcon and the man’s hand is derived from the portrait of a falconer of 1558 by Frans Floris (1517–70) in the Herzog Anton Ulrich Museum, Braunschweig.1