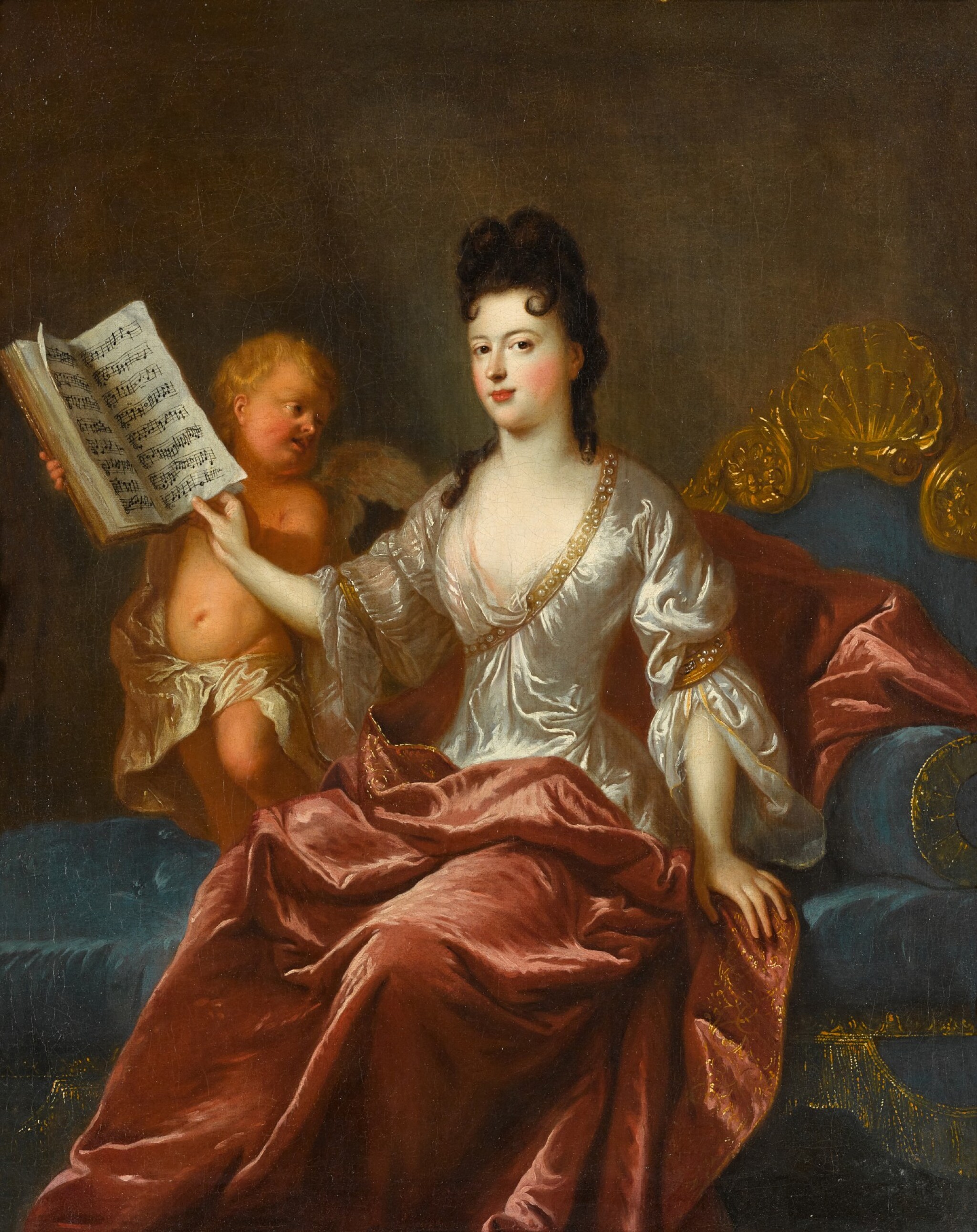 PORTRAIT OF CATHERINE DE LA BOISSIÈRE, NÉE LOISON, FULL-LENGTH, SEATED ON A SOFA AND LEAFING THROUGH MUSICAL SCORES HELD BY A PUTTO

The canvas is lined, the paint surface is relatively clean, and the varnish is clear and even. Inspection under ultraviolet light reveals a strip of retouching, approx. 1 in. thick, across the upper margin. There are further small, and sensitively-executed, retouchings scattered throughout, most notably in the sitter's forehead, chest, and the lower part of her robe; in the blue bolster to her right; through parts of the putto's body, and in the background, upper left and upper right. None of these are noticeable to the naked eye, and the painting presents well in its current state.

The painting will be included in the catalogue raisonné of the work of François de Troy currently being prepared by Dominique Brême.

“While the range of sumptuous fabrics and delicately rendered details in this elegant portrait capture one’s attention immediately, I also found myself curious about the subject. We often see portraits of men with attributes of their vocations, but how wonderful that here we have a female composer, poised and confident with a book of musical scores being held by a putto.”

Initially a student of his father Jean de Troy, François completed his artistic training in the ateliers of Nicolas Loir and Claude Lefebvre. He was received into the Académie Royale in 1674. Parallel to his career as one of the leading portraitists of his time, de Troy also held positions in the Académie Royale where he became professor in 1693, director from 1708–11 and rector in 1722. Following family tradition, his son Jean-François became his pupil. The subject of this portrait can be identified thanks to an engraving by André Bouys after a work by François de Troy very similar in composition to the present painting, showing the sitter on a sofa leafing through musical scores held by a putto, and inscribed Sarabande de Mademoiselle Loison.1 A larger version of this portrait is in a private collection.2 Noblewomen during this period often sang and played the lute or the harpsichord for their private amusement, and increasingly participated in music-making.