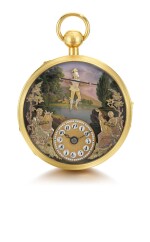 The case is in very good order with crisp and unworn engraving. Gold marks and case numbers are clearly visible within. The inside cuvette has one very faint scratch towards the winding hole.

Dial: The dial ia in good order and the enamel is undamaged. There are some scratches and dirty marks to a few of the number lozenges such as 10,11 and 1. The automata dance and play their tune very happily when the button and bow are activated..

Movement The repeats functions correctly and the music plays when activated. The watch is running when wound.

Musical watches incorporating an automaton tightrope walker are among the most captivating of their genre. Only a handful of similar watches are known and these include:

The DuBois family were already producing watches in the middle of the 18th century, however, the firm of DuBois & Fils was officially founded in Le Locle in 1785.