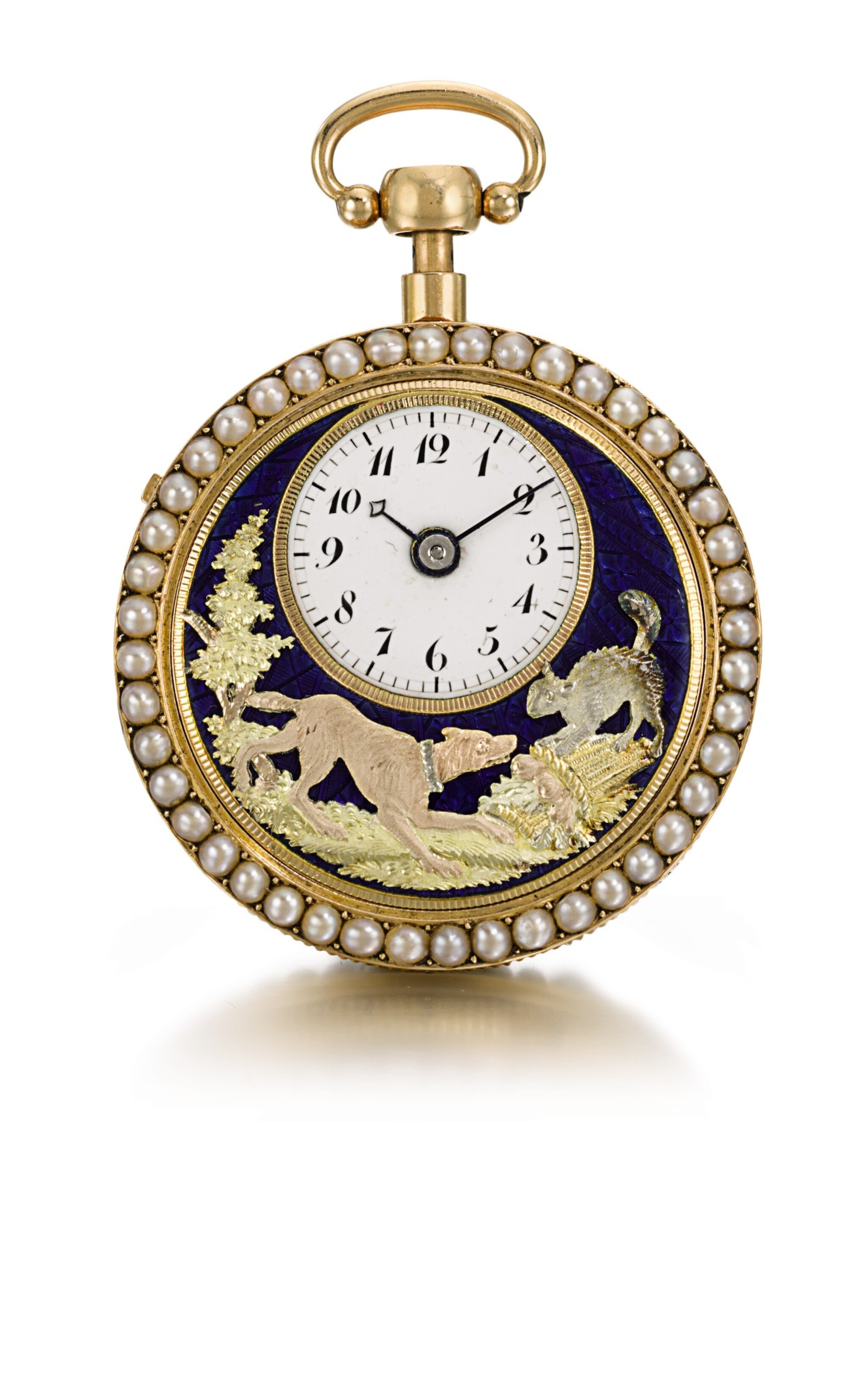 A VERY FINE, RARE AND SMALL GOLD, ENAMEL AND PEARL-SET OPEN-FACED QUARTER REPEATING AUTOMATON WATCH MADE FOR THE CHINESE MARKET

gilded half plate movement, cylinder escapement, plunge repeat activating the quarter repeating and the bellows for the 'barking dog', eccentric white enamel dial, Arabic numerals, translucent blue enamel background, vari-coloured gold scene of a dog barking at a cat, the dog's head raises and lowers while barking the hours and quarters and the cat moves its tail from side to side, gold case, the reverse with polychrome enamel painted summer flowers against a light green enamel ground, both bezels set with pearls, reeded band with opening panel at the base for the bark, gold cuvette stamped PM within a lozenge-shaped cartouche for Piguet & Meylan, cover, cuvette and bezel numbered 277, later associated gold and enamel key

Movement: running at the time of cataloguing. Dog barks the hours and quarters, however it may benefit from a service

Dial: the blue enamel is restored and now with small scratches to the enamel by. Tarnishing to the automata cat.

Case: a couple of small scratches to the floral enamel panel. Light scratches to the cuvette. In addition to the orignial maker's stamp PM for Piguet Meylan and the original stamped number which are both the inside of the cuvette, the front of the cuvette appears to have had a further script form signature added later which reads: "J. [sic] D. Piguet & P. Meylan, Geneve, N 277"

Associated key worn and only adjusts the hands, does not wind the mechanism

A very rare form of repeating watch, the sound of the ‘Barking Dog’ is ingeniously reproduced by a set of bellows activated by depressing the pendant, thus also marking the hours and quarters. To achieve the sound, the mechanism exerts a sharp pressure on a miniature bellows connected to a whistle vented through an aperture which simultaneously opens to the lower edge of the case.

Just over 20 ‘Barking Dog’ automata watches are known, of which the majority are of large size (approximately 59mm in diameter). The present watch measures just 39mm in diameter and is one of only four examples currently known of such small size. Watches featuring a barking dog automaton were most commonly produced with a dog attacking a swan or other bird. The bird and swan theme is believed to have been based on paintings from the 1740s by Jean Baptiste Oudry. By contrast, all four of the small ‘Barking Dog’ watches feature a dog barking at a cat, a scene most likely based on a design by the painter Johann Wenzel Peter (1745-1829). These small watches, all by Piguet & Meylan, are numbered between 275 and 282; two of these feature their cat to the left side of the scene, whilst the other two show the cat at the scene’s right. Below is a summary of the four:

The ‘incomparable’ Bohemian painter Johann Wenzel Peter (1745-1829) who lived and worked in Rome from 1774, specialized in painting animals in conflict. His design of a dog barking at a cat (though not identical to this) was much copied by Roman mosaicists after it was first recorded in the studio of the mosaicist Puglieschi in 1805/6. An example signed by Gioacchino Barberi (1783-1857) is set into the lid of a contemporary gold box by A.J. Strachan, London, 1807/8 that is now in the Gilbert Collection, London (Charles Truman, The Gilbert Collection of Gold Boxes, vol. I, Los Angeles, 1991, p. 328, no. 113). Another example, in a private collection, signed by the mosaicist Domenico Moglia (1780-1862) is also set into the lid of a snuff box by Strachan, again of 1807/8; the base is set with a micro mosaic of a dog barking at a swan. It is not inconceivable that Piguet & Meylan were aware of these fashionable mosaics, since many were bought as plaques by travellers on the Grand Tour and mounted by Geneva gold box makers.