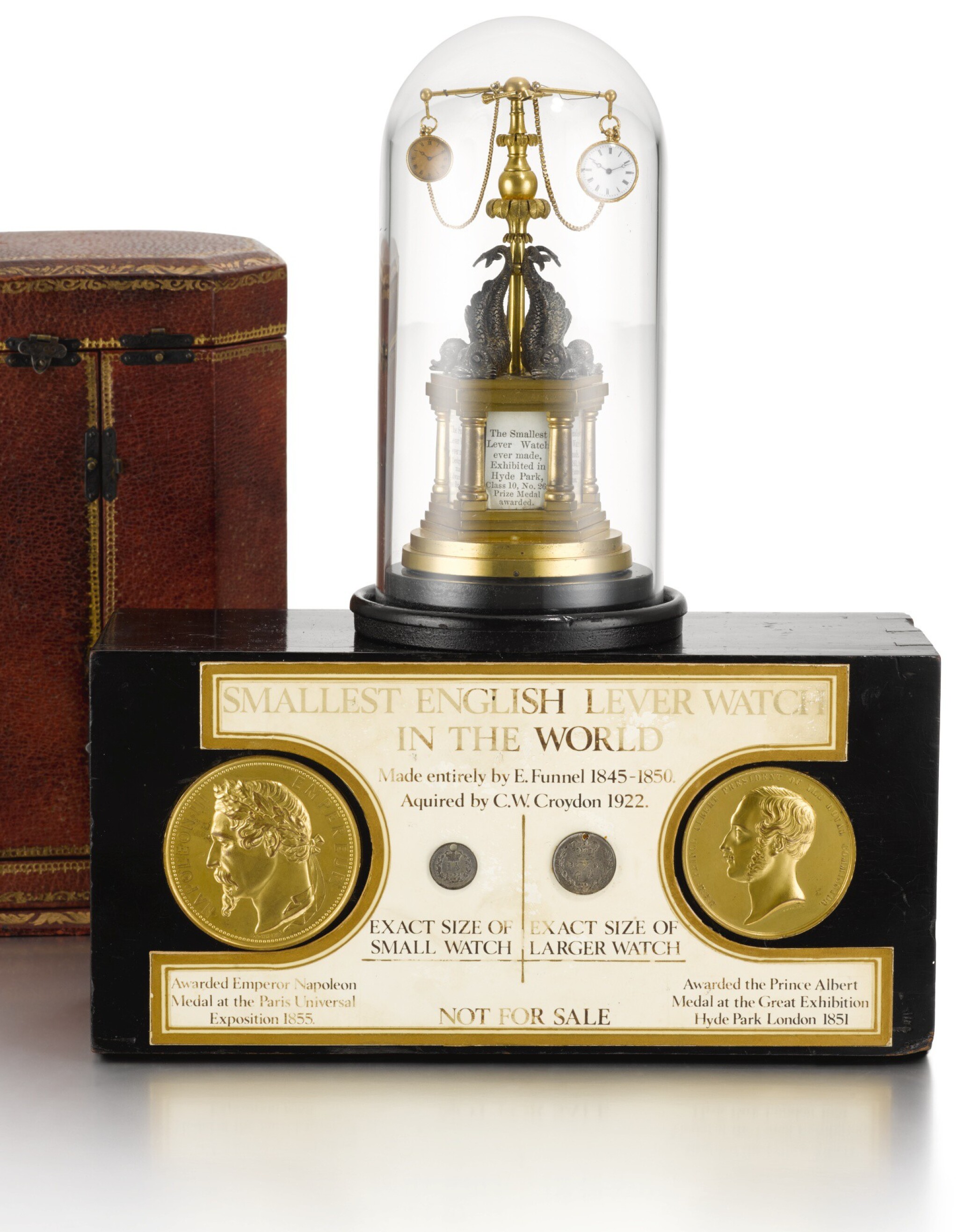 Movement running at the time of cataloguing. Small scratches to the dial. Light scuffs to the case. Engraved decoration in good condition.

Movement running at the time of cataloguing, Cracks to the dial. Light scuffs to the case. Engraved decoration in good condition.

Wear to the gilding throughout. Dolphins heavily tarnished.

Two clasps are lacking. Scuffs throughout.

Revolving mechanism not working. Scuffs to the ebonised wood. Text faded to the plaque.

Official Catalogue of the Great Exhibition of the works of All Nations, 1851, p.63

Edward Funnell, the son of a shoemaker was born 1822. A talented and inventive man, in addition to the watches and domestic and public clocks that he made, Funnell is also known to have patented signalling and alarm devices for the railways. Funnell’s miniature watch is believed to have taken five years to produce, he would therefore have begun making it at about the age of 23. Astonishingly small, the watch measures just 12mm in diameter and upon completion it was billed as the smallest lever watch in the world. The watch was exhibited at the Great Exhibition held in London in 1851 where it was awarded the Prince Albert Medal; in 1855 the watch was awarded the Napoleon Medal at the Paris Exposition Universelle. A letter written by a C.F.D. of Brighton to the New York Times on 30 September 1888 notes: “In the window of Mr Funnell, watchmaker, of this town – Brighton, Sussex – has been exhibited for many years the ‘smallest watch in the world.’ I have examined it this day. It is a gold lever watch, measures only seven-sixteenths of an inch in diameter and one-eighth in thickness. It has 10 holes jeweled and 5-other ruby actions, goes 28 hours with one winding, and keeps time accurately. It was first exhibited at the great exhibition in 1851 in H. P. class 10, No.26; also in the Paris Exhibition, class 8, and for which medals were awarded. It is the exact size of an English silver two-penny piece, special coinage. It took Mr Funnel, who designed it, five years to complete it. The bow which was used for turning was made from the hair of his wife’s head. Mr. Funnell has also a second miniature watch – a lever and jeweled throughout. It is exactly the size of an English three-penny piece.” It is not known exactly when the second of the two miniature watches was produced by Funnell, however, the description of its size in the New York Times letter matches that of the larger of the two miniature watches offered within this lot.

In 1951 Funnel’s miniature exhibition watch is mentioned again in an article for the Horological Journal regarding a forthcoming exhibition (see: Horological Journal, vol. 93, No.1, January 1951, p.27). The article notes that “…Mr. Funnell died in 1889, but the watch continued to be an object of interest in the shop window for many years during the proprietorship of Mr. Funnell’s successor, Mr Henry Kyzer. By its side was a larger watch, in silver, also made by Mr. Funnell.” The silver watch was of course presumably shown for scale against the miniature watch and is no longer present but replaced by Funnell’s other miniature (though slightly larger) watch. It seems highly likely that the stand from which the two watches are suspended is the original used for displaying the watches at Funnell’s premises in Brighton and may well have been used for the 1851 and or 1855 exhibitions, complete with its original red Moroccan leather covered travelling case with gold tooled decoration (the stand incorporates dolphins which is a symbol long associated with Brighton and is used in the town crest). The later wooden base details the acquisition of the watches and their stand by C.W. Croydon in 1922. Charles William Croydon (1868-1926) was a fellow of the British Horological Institute and ran the Ipswich branch of Croydon's & Sons, a clock, watch and jewellery business at 50/56 Tavern Street Ipswich. Presumably the stand was therefore used as a shop display at the company's premises.

Funnell was recorded at 2 Clarence Place, Brighton and later at East Street, Brighton. He is believed to have ceased working in 1878 and died in 1889.