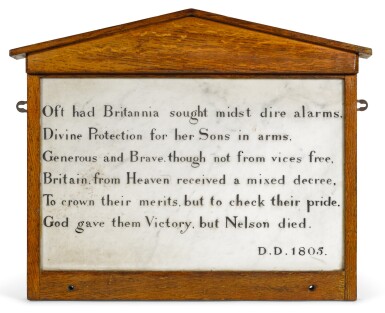 held within an oak frame, the tablet inscribed as follows: 'Oft had Britannia sought midst dire alarms, / Divine Protection for her Sons in arms, / Generous and Brave, though not from vices free, / Britain, from Heaven received a mixed decree, / To crown their merits, but to check their pride, / God gave them Victory, but Nelson died. / D. D. [Duke of Devonshire]' with they year of Nelson's death '1805'

This ode was written by William Cavendish, 5th Duke of Devonshire (1748–1811) and was published postumously in the Morning Chronicle on the 30th November 1812.