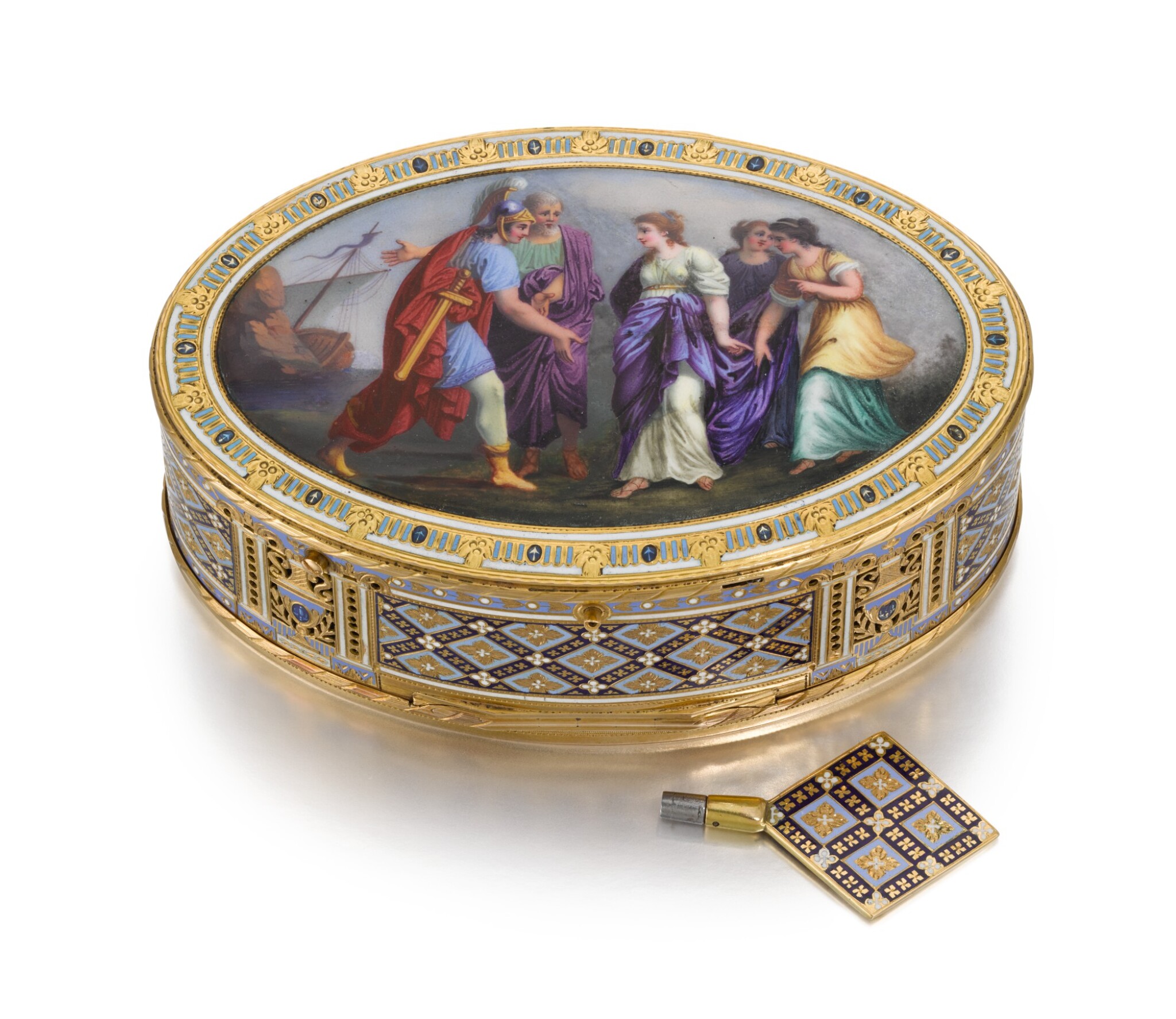 oval, the lid painted en plein with Telemachus arriving with Mentor on Calypso's isle, within a chased and enamelled border, the sides and base decorated in taille d'épargne enamels with a diaper design within similar borders, the sides divided by urns on a ground pierced to help the music be heard, the lid opening to show the complicated coloured gold automaton by which figures in renaissance dress conduct music and peep at an itinerant knife grinder, gilt sur plateau movement, apparently unmarked, scratched number '10' in two places, the enamel ground painted as a romantic Italianate garden with trees, arcades and statues, the base opening for the key compartment, maker's mark, with original key decorated with matching diaper pattern

The subject on the lid represents the arrival of Telemachus on Calypso’s isle (fig. 1), from an engraving after François Boucher (1703-1770), etched by Antoine Jean Duclos and engraved by Jean Baptiste Patas.

The adventures of Telemachus, mythical son of Odysseus and Penelope, who went to search for his errant father who had failed to return home to Ithaca after the Trojan War, were a popular subject in 18th century decorative arts (see also lot 46). The original story from Homer’s Odyssey had been much expanded and developed by François Salignac de la Mothe-Fénelon (1651-1715) whose Aventures de Télémaque was first published anonymously in 1699 and subsequently reprinted in many languages. In Fénelon’s version, Telemachus is accompanied by the elderly Mentor, Athene in disguise. Calypso falls in love with the youth when he and Mentor are shipwrecked on her island and in order to detain him she persuades him to recount his earlier adventures. While these are engrossing, the main purpose of the book was to spread Mentor’s philosophy of peace, simplicity and the brotherhood of man under a constitutional monarchy, sentiments much admired in the coming Age of Enlightenment.

Between 1792 and 1801 Jean-George Rémond (1752-1830), the goldsmith from Hanau, and his compatriots Jean-Noé Lamy and Laurent Guisseling, were in partnership in Geneva with the locally-trained stalwarts David Gide and Joseph Guidon. The relationship was not only a working one since the 1797 census records that all five families were also living on different floors of the maison Guidon in the rue du Cendrier. Professionally, the partnership was to prove most successful as attested by the number of beautiful snuff boxes and cases for automata struck with this mark, in the style that was to become known as ‘Geneva enamelling’ but which in fact contains many elements derived from Hanau. By 1801, however, it was decided not to renew the partnership and the two elements separated again with Rémond, Lamy and Guisseling moving to new premises. According to Frédéric Leschot, for whom the firm had worked, the split was not amicable. Indeed he blamed the break-up for his delay in sending a promised ‘temple’ to his client Duval in London (BGE, papiers Leschot, Ms. Suppl. 964, pp. 165/6, letter dated 5 February 1801).