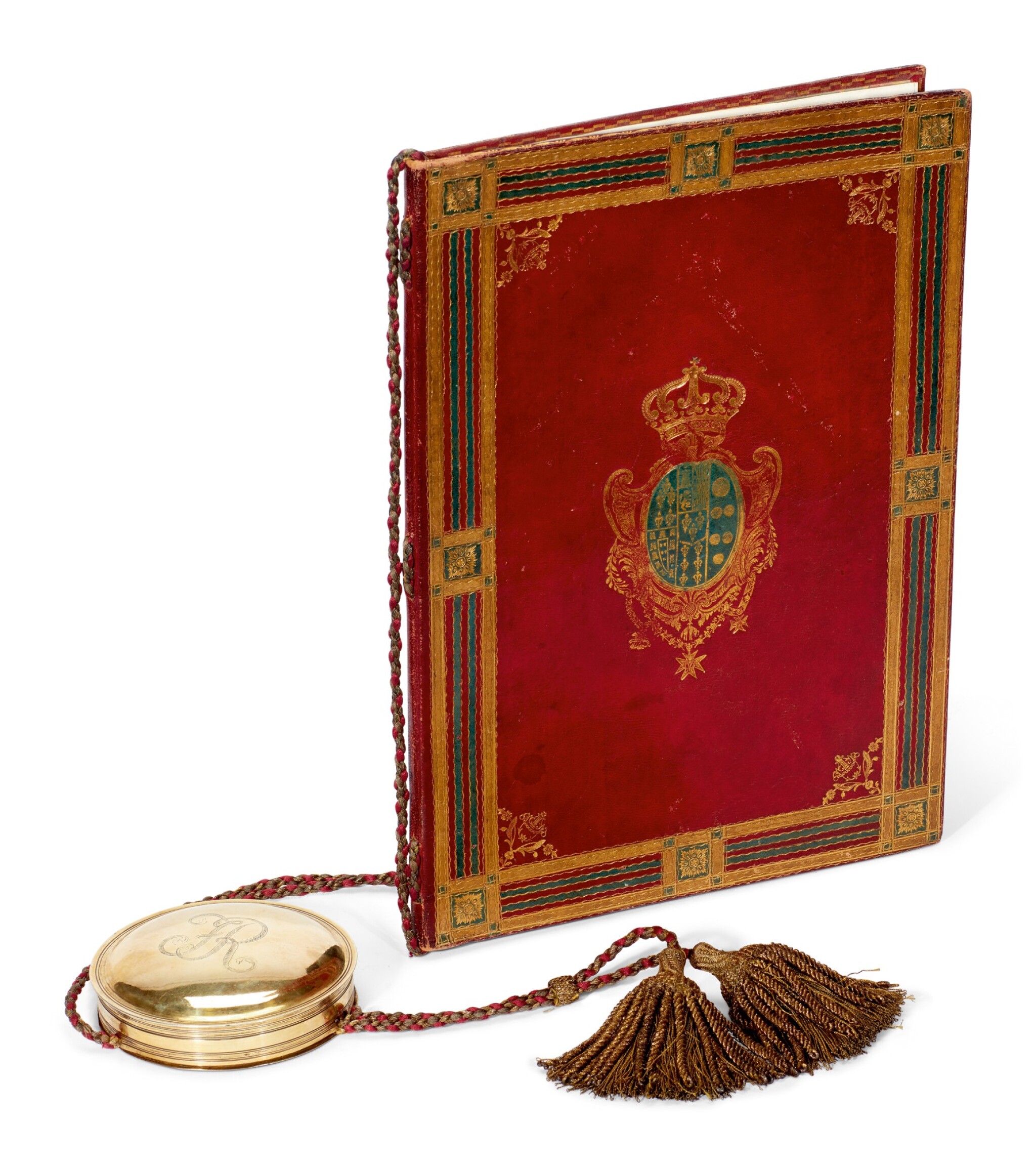 THE ORIGINAL PATENT OF NOBILITY FOR HORATIO NELSON, CREATING HIM DUKE OF BRONTE, in a fine professional calligraphic script, the preliminary text with the King's titles engrossed and heightened gold and blue ink, margins with a ruled decorative border in blue, yellow-green, and red ink, in Latin, signed at the foot and counter-signed by Thomas Jirrao, Clerk of the Council, 6 pages, Palermo, 10 October 1799; with a note of official registration signed by the Senior Councillor Joachim Granito, an official note that the Patent was presented at Palermo on 10 November 1799, and autograph inscription signed by George Harrison, Norroy King of Arms, in English ("....Recorded in the College of Arms ... in obedience to a Warrant under His Majesty's Royal Signet ... the ninth day of January 1801..."); altogether 7 pages, vellum, folio (c.375 x 265mm.), marbled end-papers, finely bound in contemporary red morocco gilt, borders onlaid in alternating bands of green and citron morocco with wavy gilt fillets, with eight square compartments enclosing chrysanthemum motifs gilt at four corners and centres of borders, centrepiece with an oval onlay of green morocco bearing the Royal Arms of the Kingdom of Naples and Sicily in gilt set within an elaborate gilt cartouche surmounted by a crown with badge of the Order of the Golden Fleece and collars of the Order of San Januarius, the Order of the Constantinian of St George and the Ordre du Saint-Espris, floral and foliate corner ornaments gilt, edges gilt, inside dentelles, with FINE IMPRESSION OF THE GREAT SEAL OF THE KING OF NAPLES AND SICILY INCORPORATING FULL ROYAL ARMS IN RED WAX CONTAINED IN SILVER GILT SKIPPET (c.120mm. diameter), WITH ENGRAVED ROYAL MONOGRAM FR, pendant on plaited red and gold thread cords terminating in two large elaborate gold thread tassels

"...I went to Naples, and, as his Sicilian Majesty is pleased to say, I reconquered his Kingdom, and placed him on his throne..." (Nelson, from his 'Sketch of My Life', October 1799)

THE INSTRUMENT AND SYMBOL OF THE HIGHEST OFFICIAL HONOUR RECEIVED BY NELSON: KING FERDINAND'S GRANT OF A DUKEDOM, HONOURING THE SAVIOUR OF HIS KINGDOM. In 1798-99 Nelson played a central part in ensuring the survival of the Bourbon monarchy in southern Italy known as the Kingdom of the Two Sicilies. His victory at the Battle of the Nile in July 1798 temporarily relieved French pressure on the kingdom, and when Nelson reached Naples on 22 September he was given a hero's welcome. In November Nelson provided naval support to an ill-advised advance on the French in central Italy, and it was again Nelson who organised the evacuation of the royal family to Palermo the following month as the French moved south on Naples (see previous lot). Six months later Nelson was back in Naples, playing an integral part in the overthrow of the French puppet state, the Parthenopean Republic, and re-establishment of the monarchy. It was, of course, also in Naples that he fell in love with Emma Hamilton and her friendship with Ferdinand's queen, Maria Carolina, cemented Nelson's own bond with the Sicilian royal family. Nelson's decision to remain in with the court in Palermo until July 1800 had more to do with Emma Hamilton's charms than with military necessity.

On 13 August 1799, just after his return to Palermo following the recovery of Naples, the Prince de Luzzi informed Nelson that the King was awarding him a dukedom:

"...Hence His Majesty, desirous of giving your Excellency a public and lasting proof of these sentiments, and of transmitting to future generations the illustrious remembrance of your merits and of your Glory, has resolved and ordained that the ancient and famous Town of Bronte on the skirts of the Etna, with its territory and dependencies shall be constituted a feudal tenure and shall be raised to the dignity and title of a Duchy [...] and that the said Duchy and Title with its revenues and jurisdiction shall be conferred on your Excellency [...] Your Excellency will receive the Royal Patent which is being made for the solemn investiture of the actual concession..."

The Royal Patent -- the present elaborate document -- took until 10 October to prepare, and Nelson seems to have been presented with it at an official investiture in Palermo a month later on 10 November. The lengthy Latin text describes the Admiral as Horatio Lord Nelson of the Nile, Master of the British fleet and of the whole of the Mediterranean, whose naval exploits are never cited without praise, and whose glory redounds throughout the whole World; it enumerates his services to the two Sicilies by defending the Kingdom and expelling their enemies; it declares that we dare to give to this same illustrious Nelson proof of extraordinary and everlasting gratitude; and it describes in detail the Duchy of Bronte itself, with all the feudal rights pertaining thereto, which is awarded to Nelson and his heirs in perpetuity. Nelson was especially gratified by this honour: titles and honours fed his vanity, and the British Government had as yet seen fit only to award him a barony. He swiftly began a correspondence with the College of Arms in London about his ducal arms, the pelisse and aigrette he should wear, and how he should sign his name (he changed his signature several times over the next 16 months before finally settling on the familiar "Nelson & Bronte"). In fact, however, he had accepted the honour before having been granted formal permission to do so from his own monarch, George III, and - as the subscription on this document shows - it was not enrolled by the English College of Arms until 9 January 1801, with the British Royal licence itself following on 23 September 1801.

Nelson's new dukedom consisted of a 30,000-acre estate on the slopes of Mount Etna outside the small medieval town of Brontë. The ducal seat was the uninhabitable ruins of Castello di Maniace and the land was rocky and desolate, marked by the debris of volcanic erruptions. Although Nelson was told that the estate had a projected income of £3,000 per annum, which he planned to use to support his family, this income never materialised. However the name Brontë itself had powerfully appropriate resonances. It came from the Greek for thunder, and was the name of one of the Cyclops (one-eyed, like Nelson) who had forged Zeus's thunderbolts and Poseidon's trident. Emma Hamilton began teasingly calling her hero-lover "My Lord Thunder", which, given the number of cannon at his command, was not an inappropriate title. THIS EXCEPTIONALLY RESONANT DOCUMENT IS A UNIQUE RECORD OF A KEY MOMENT IN NELSON'S STORY.

a small number of scribal erasures (including the erasure of the numeral "III" on first page after "Ferdinandus"), light soiling to leaves, slight scuffing and staining to covers