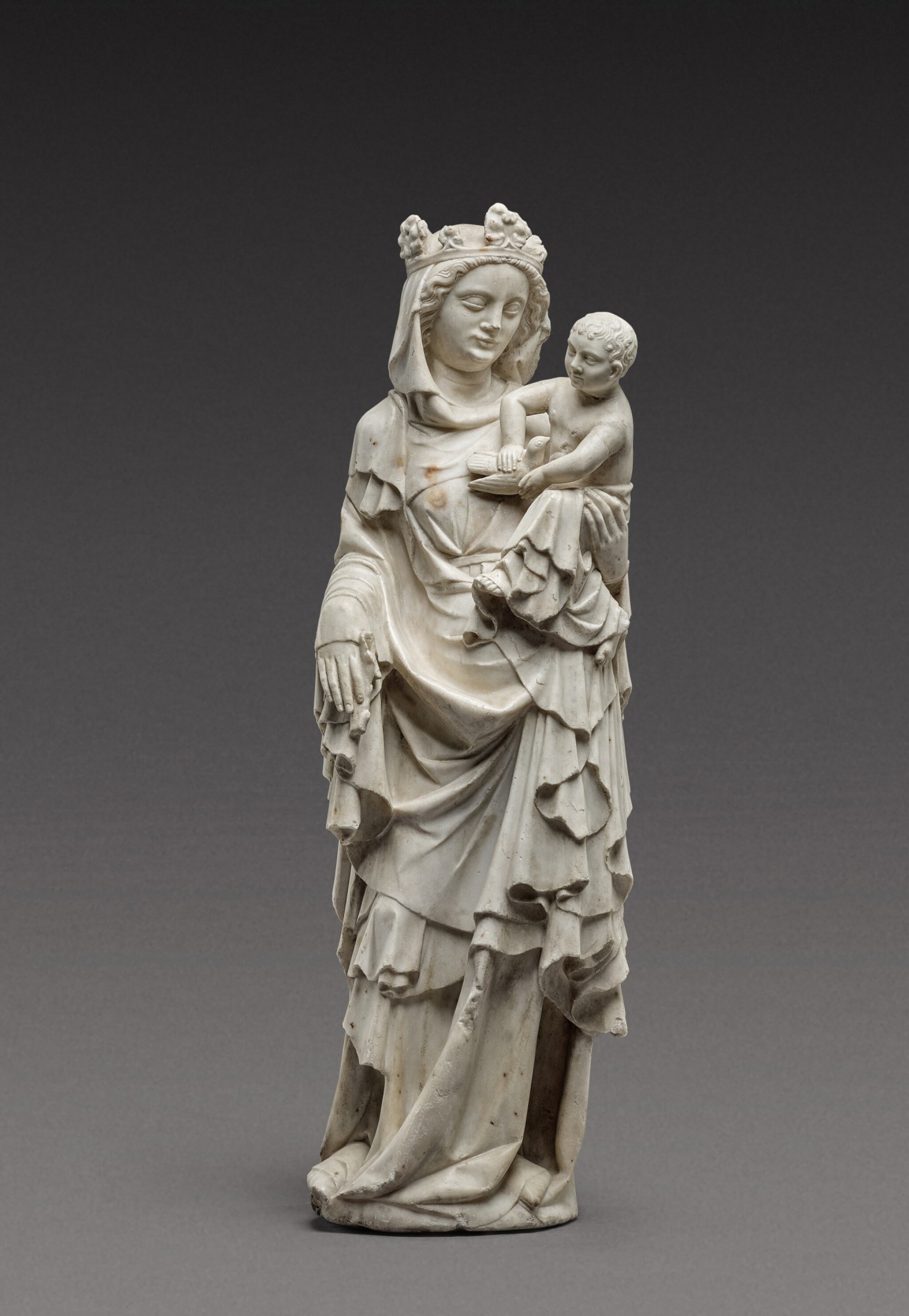 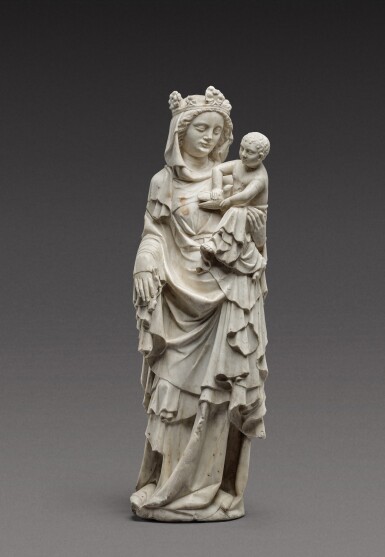 Overall the condition of the sculpture is good considering its age. The surface polish is beautifully preserved and the carving of the drapery is particularly elaborate and beautiful. There is dirt and wear to the surface consistent with age. The head of the Infant Christ is carved from a different marble as the rest and is probably a replacement. It is detachable and held in place with a small dowel. The proper left foliate finial of the Virgin’s coronet is replaced. There are some small losses to the edges of the three other main finials and also to the smaller finials, in particular to the right side of the central finial and flanking proper left small finial. The Infant Christ’s arms and bird are reattached with original pieces and there are several joints visible including at his biceps. There are some areas of old plaster fill at these joints. The tips of the Virgin’s proper right fingers are reattached or restored. The upper and lower sections of her attribute (probably once a lily or a rose) are lost. There are various minor chips and small losses to the edges and corners of the folds of drapery including to the drapery falling from her arms. There is a small loss to the end of the Virgin’s nose and a few minor surface scratches and abrasions. There is a small loss to her proper right foot and a small repair to the end of her left foot. There is natural veining to the marble including various minor slightly open veins to the surface such as to the Virgin’s sleeve at the proper right side. There are some minor surface abrasions including to the drapery above the feet at the front. There are a few areas of orange pigmentation in the stone which were probably caused by environmental factors in history. These include orange patches at the Virgin’s chest on the proper right side and some spots and specks in the drapery at the bottom, front and back. There are two partially plaster filled rectangular inlets to the back for now removed stabilising mounts.

No subject matter encapsulates the magnificence of Gothic sculpture as perfectly as the standing Madonna and Child. The rise of the great French cathedrals in the 13th and 14th centuries provided the context for large representations of this image on the portals and interiors. From small ivory carvings, with their characteristic curving form derived from the natural shape of the tusk, to monumental limestone architectural groups, the cult of the Virgin came to dominate religious devotion during this period. Whilst limestone statues proliferated, and most were originally painted, marble examples are rarer and denote a more prestigious commission.

One such exceptional commission, about which both the name of the sculptor and patron are known, provides an apposite comparison with the present Madonna and Child. This is the marble group in the parish church in Gosnay (Pas-de-Calais) which is documented as the work of Jean Pépin de Huy (Rhein und Maas, cat. 06). The work (measuring 64cm. in height) was commissioned by the Countess Mahaut d’Artois and installed in Mont-Sainte-Marie at Gosnay in 1329. Here, as in our larger marble group, the Virgin stands with her weight on her left leg and her right leg forward, animating the drapery. The Christ Child is held in her left hand whilst she holds a lily in her right hand (lost in both marbles). The Virgin is crowned, her veil framing her wavy hair. In the Jean Pépin de Huy marble the Christ Child holds an apple whereas in the present group he holds a bird.

Dated by the commission to the end of the second decade of the 14th century, the relative simplicity of the drapery folds of the in the Pépin marble contrast with the more voluminous folds of the present marble, notably on the Virgin’s left side which suggests a date later in the 14th century. To confirm such a dating, further comparisons can be made with the large stone Madonna and Child in the church as Lesches (Seine-et-Marne) that is inscribed with the date 1370 (Les Fastes du Gothique, cat. 69). In both works the cascade of rippling folds introduces a flamboyant decorative element. A further comparison - in this case also made of marble – is the smaller (63cm.) Madonna and Child dated around 1364 and attributed to Jean de Liège, now in the Calouste Gulenkian (Les Fastes du Gothique, cat. 66). Here a more a playful Christ Child is held in the Virgin’s right arm. The baggy fold around the Virgin’s middle has affinities with the present group which suggest a dating for the present marble around the 1360s.