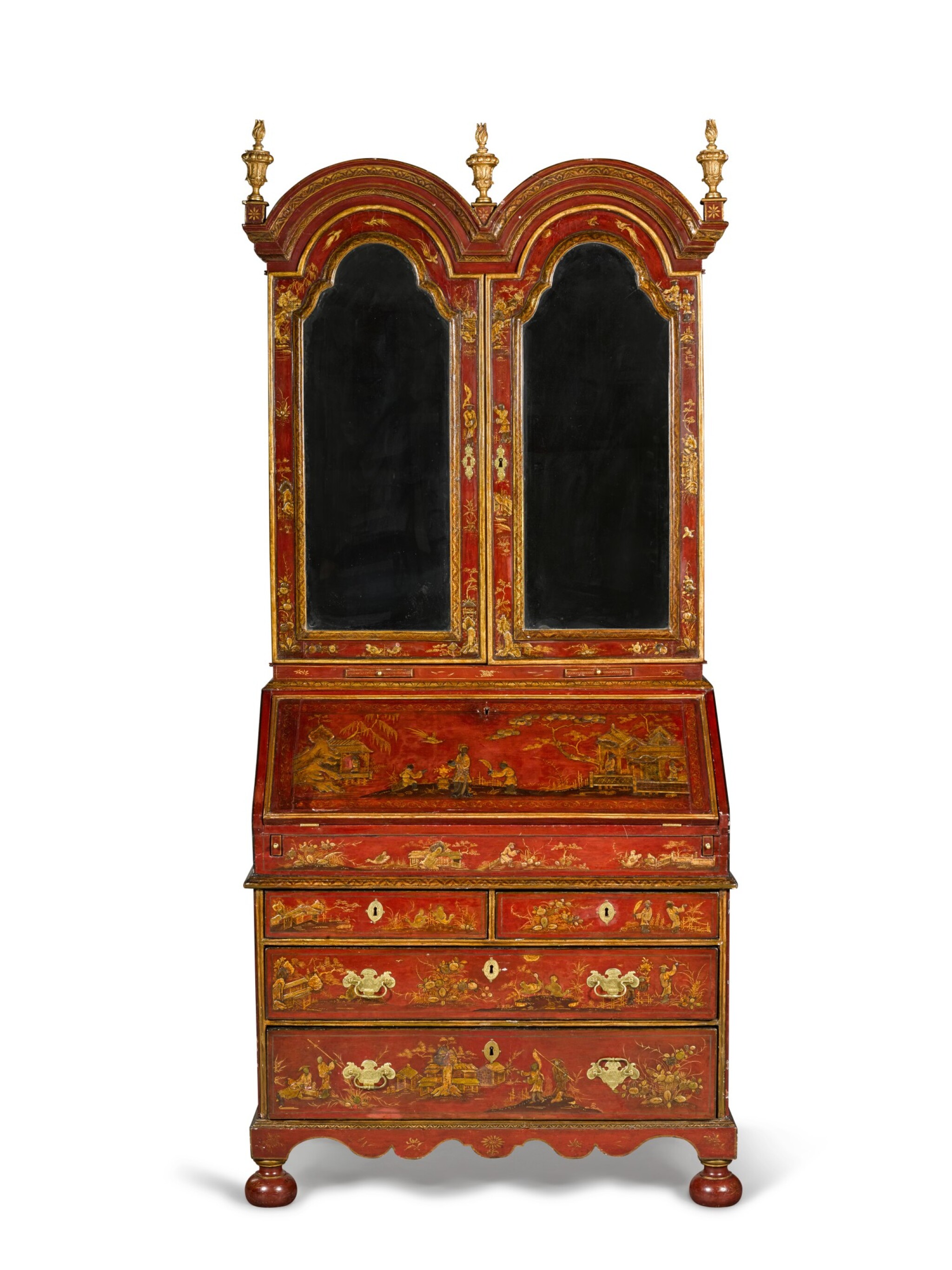 decorated with chinoiserie motifs, the upper section with a double-domed top with later giltwood finials each door with later shaped bevelled mirror opening to reveal a fitted interior with concealed drawers including those behind pull-out columnar pilasters, with two candle slides, the lower section with fitted fall-front bureau above later lopers and two short and two long graduated drawers, on later bun feet

A striking and dramatic piece in overall reasonable restored condition with typical re-touching/decorating and stabilizing of japanned surface as to be expected. Chips and losses to decoration - notably to raised areas of relief and edges. There has been some movement of underlying carcass with corresponding localized areas of re-touching, filler and redecoration at these sites. The interior of mirrored cupboard doors with some warping and conforming re-decoration to japanned surface. One brass hinge to cupboard of fitted interior is snapped. Brasses are gilt and later and two escutcheons are detached but present. Steel key to fall front bureau does not work. Do not use. Velvet writing surface to fall front later replacement. Panelling to backs secured with historic canvas restorations. Bun feet later and shaped apron frieze possibly later too.

The taste in England for all things 'Indian' (that is Chinese), became firmly established after the restoration of the monarchy in the 1660's, and was initially supplied by Portuguese traders who held a virtual monopoly of trade with China until the end of the 17th century. The Dutch traders were a little more successful than the English in circumventing by nefarious means this monopoly, both countries trading with Chinese merchants in Formosa and at Bantam in Java.

London joiners profited immensely from this and a thriving trade arose in England with wares that were decorated to simulate oriental lacquer. The methods used by the English proponents of this art were fully explained in a book published in 1688 by John Stalker and George Parker entitled 'A Treatise of Japanning and Varnishing Being a compleat Discovery of those Arts with The best way of making all sorts of Varnish for Japan Wood...The Method of Gilding, Burnishing and Lacquering....' (John Stalker & George Parker, A Treatise of Japaning and Varnishing, Oxford, 1688, reprinted by A. Tiranti, London, 1960.) The volume also included 'Above an Hundred distinct Patterns for Japan-work in Imitation of the Indians, for Tables, Stands, Frames, Cabinets, Boxes, &c.' The origins of Stalker and Parker are unclear, although the former's address at the 'Golden Ball in St. James's Market, London' indicates that he was a tradesman. The publication is obviously directed to both the professional and the amateur, the 'recipes' being extremely clear in their direction.

Although the fascinating series of plates illustrating Oriental scenes, pursuits, flowers, trees, birds, animals and butterflies are very similar to the decoration on contemporary cabinet-work, strangely no direct copies have been found. The differences between Oriental, both Chinese and Japanese, and English work is seen in these designs. The decoration of the former is well mannered, in scale, and with reasonable perspective. English work is far more exuberant and 'colourful' in style - birds and butterflies become larger than people and buildings, and the flowering trees and plants form the effect of a fantasy jungle, again totally out of scale with any other elements of the design. The present cabinet, with its lavishly decorated surfaces ornamented with Oriental scenes and figures in gold on a rich red ground continues in this tradition, although it is dated some twenty or thirty years after Stalker and Parker's publication.