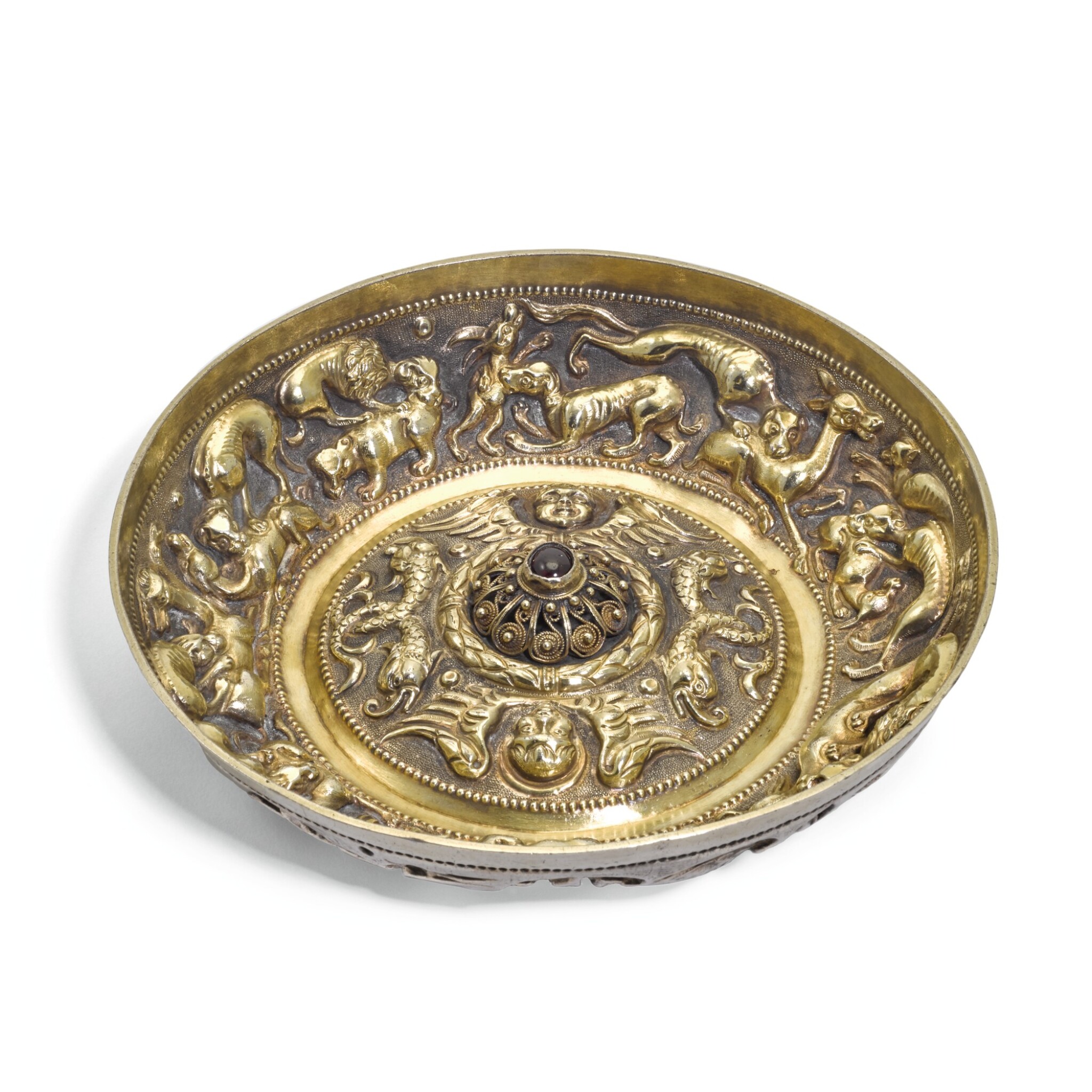 Embossed and chased with a band of hounds attacking a bear, hares, deer and unicorn enclosed by beaded bands and centred by a garnet cabochon, in a filigree surround below embossed entwined dolphins and cherubs

In good overall condition, very minor circular dent on the rim; there is a lump of old solder on the back which was possibly used to hang the salver in the past as it does not show through and there is no sign of an old repair, the gilding around the outer rim is slightly lighter but still a very nice colour.

The bowl follows the classic pattern of 16th century Portuguese bowls or salvers; two plain bands alternating with beading and embossed ornament of animals, figures or foliage. A Portuguese tazza with very similar border of hounds similarly attacking deer and other animals was sold Sotheby’s, Royal and Noble, London 17 January, 2019 lot 67. It is possible that the Ragusan hallmark (the mitred head of St Blaise) is a control mark to allow a Portuguese made item to be sold in Ragusa, perhaps like the Portuguese dish in St Benedict Biscop parish church, Wombourn, South Staffordshire, which has London hallmarks for 1606-7. See Reynaldo dos Santos and Irene Quilhó, Ourivesaria Portugesa, Vol. II, Lisbon, 1960, p. 48.

The Dalmation republic of Ragusa was a very important trading group from the 16th century until its earthquake of 1667. It has been estimated that at the time of the Spanish conquest of Portugal (1580) Ragusa had the largest fleet of ocean going vessels (over 300 tons) after the Netherlands and Spain itself, and that one third of the Spanish fleet in the Mar Oceano was Ragusan built, manned and commanded. Ragusa was in direct competition with Portugal for the spice trade with the indies having their own colony on the island of Goa at Sveti Vlaho (St. Blaise) within but independent from the Portuguese colony of Goa. See: Nicholas Mirkovich, Ragusa and the Portuguese Spice Trade, The Slavonic and East European Review, American series vol. 2 (March 1943), Cambridge University Press, pp. 174-187.

Ragusa had one of the oldest and most important goldsmith’s trades in Croatia with a regulated ‘hallmarking’ system based on sterling since 1277, a mint from about the same time and a guild from 1306. The right to work as a goldsmith in the rich Ragusan republic was not restricted to local artisans it attracted many immigrant goldsmiths and medallists. A 15th century bowl with Ragusan hallmark, the centre embossed with a hound attacking a stag was sold Sotheby’s Geneva 18 November, 1996 lot 174. See that sale for more detail which was supplied by Flora Turner and Marian Wenzel.