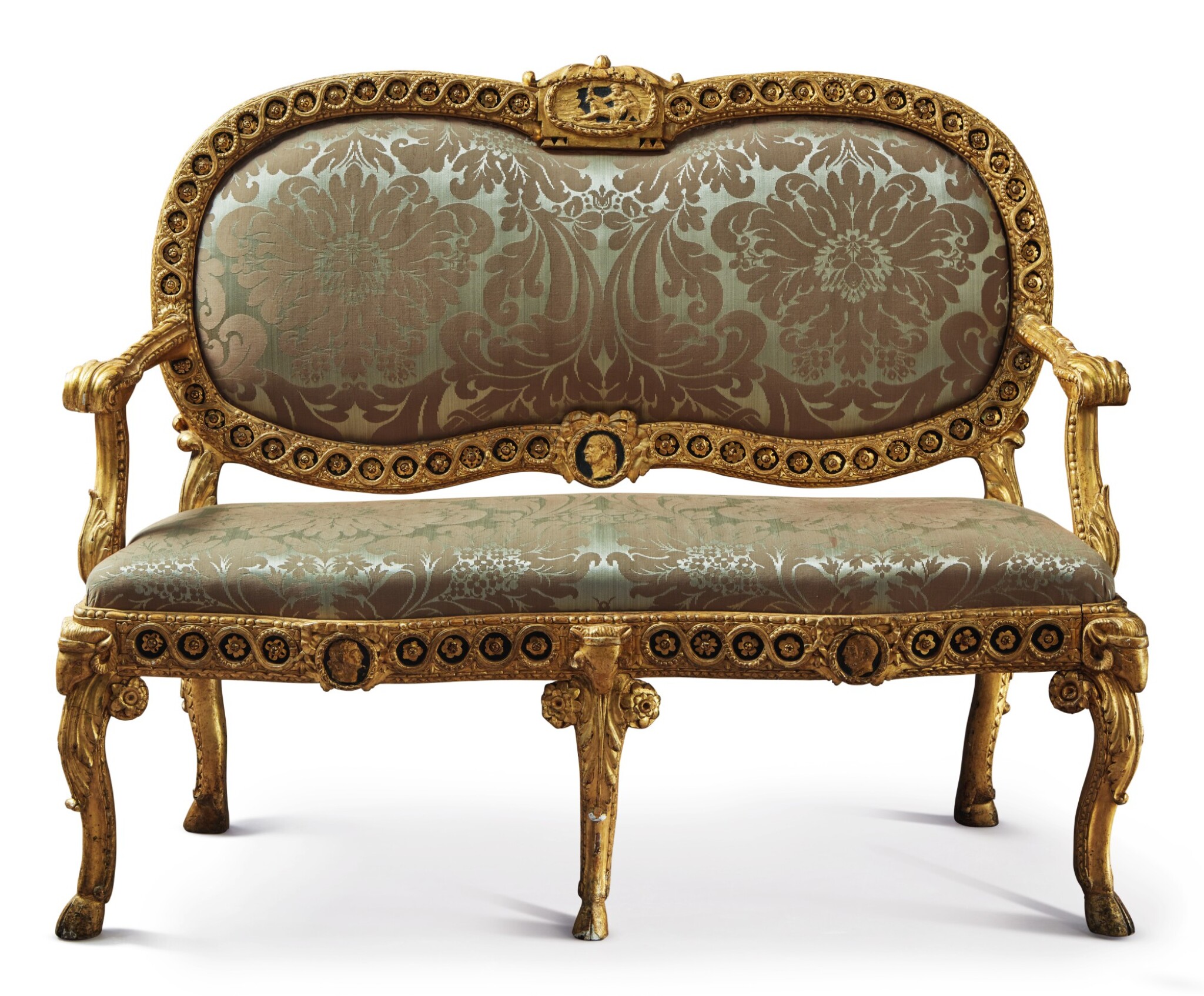 Scattered losses, rubbing and chips to gilding; black painted background to guilloche decoration and reserves refreshed, some rosettes probably replaced. Very minor typical age shrinkage at joints. Scattered old inactive worm holes to rails. One rosette return on front leg replaced. Repair to one front and one back hoof foot and to central front leg with replacements to support block on inside rail. One chassis hook on back of crest rail lacking.

This sofa forms part of a larger suite, one armchair of which is illustrated in Colle, p.145. They exemplify the Roman interpretation of the neoclassical idiom, heavily influenced by the designs of the architect and draughtsman Giovanni Battista Piranesi (1720-1788). Ram's headed legs and a frieze with a central circular portrait medallion appear in a design for a console table by Piranesi now in the Kunstbibliothek, Berlin (ill. González-Palacios 1984, Vol.II p.81 n.153). Comparable legs with ram's heads and hoof feet are also found on several surviving Roman tables including a pair of console tables and a gueridon now in the Lazienki Palace, Warsaw (ill. González-Palacios 2004, p.216-18), and on a single console with mosaic top sold Sotheby's New York, Inspired by Chatsworth, 28 June - 18 September 2019, n.54.

Stylistically this group is related to another set of important Roman neoclassical armchairs constructed equally à chassis and with comparable portrait medallions centering the crest and seat rails and very similar scrolled armrests with acanthus-carved supports. One armchair was in the Alberto Bruni-Tedeschi Collection, sold Sotheby's London, 21 March 2007, lot 131; another sold Sotheby's London 11 June 2003, lot 77 and a further pair was exhibited by Christophe de Quénetain at the Paris Biennale des Antiquiares in September 2010. Their design has been attributed to the architect Antonio Asprucci and their execution to Antonio Landucci, who supplied a pair of console tables with medallion-centered friezes to Prince Marcantonio Borghese at the Palazzo Borghese in 1773 (now in the Quirinale Palace).