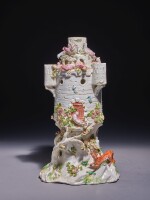 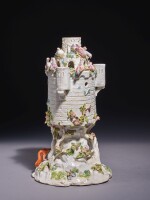 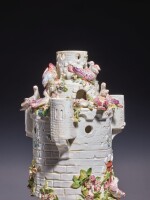 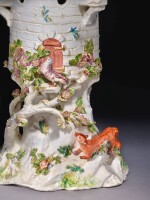 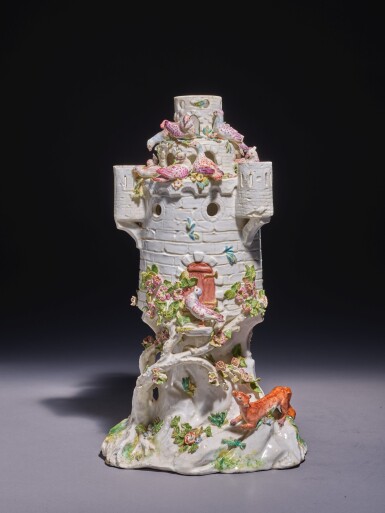 in the form of a machicolated circular brickwork tower, with a pierced and stepped top around which perch pigeons and squabs, the top surmounted with three over-hanging circular turrets, raised upon a mount base applied with flowers and leaves with roses climbing up the sides of the tower with a fox peering up at a pigeon in front of the tower door, dark iron-red anchor mark

The applied fox is lacking its front left paw, its snout replaced, and its tail has been re-stuck at its terminal.

The applied leaves with typical chips, some of which have been color-filled across break points. Some of the bird beaks with small chips. The bird in front of the door with its beak restored and re-stuck.

The model may have originally had four separate porcelain turrets, when comparing it to the other two surviving examples.

There is some scattered areas of fine glaze crazing. One area of crazing on the top edge of the tower with some light associated staining.

When sold in 2003 the piece was mounted as a lamp, since removed. The piece appears to have been drilled in the interior, and base.

Overall for a piece of this complexity it is in good appearance.

This whimsical model is a tour-de-force of early English porcelain production. Perhaps due to its complicated modelling and the unpredictable nature of wood-burning kilns, the dove-cote pot-pourri may have only been attempted a few times at the Chelsea factory. Indeed there appears to be only three known examples of this model recorded from the early red-anchor period. One was sold at Christie's London, January 29, 1973, lot 80, and is now in the Legion of Honor Museum, San Francisco, gifted by Mrs. Constance Bowles Hart in memory of Henry Bowles in 1986, inv. no. 1986.45-a-e. This piece is the closest to the present lot which also features a fox. A second, without the figure of a fox, from the Collection of Captain M. Denham, sold at Sotheby’s London, May 12. 1959, lot 44, its current whereabouts unknown. The present lot comprises the third known example.

The model is recorded in the Chelsea catalogue of the 1756 sale, ninth day, Wednesday April 7, lot 67, as:

“A most beautiful perfume pot in the form of an old castle or pigeon house, decorated with pigeons, etc.”

The model is undeniably one of the largest attempted by the Chelsea factory at this early period, and is just three inches shorter than the red-anchor pair of large Chelsea figures of Peacocks, sold at Sotheby's London, December 4, 2013, lot 436. An interesting comparable piece is a candlestick in the form of a dovecote, circa 1756-58, now in the Victoria and Albert Museum, London, mus. no. C.374-1921.

The idealized and romantic subject of a ruinous dovecote was occasionally visited by contemporary painters, including Francois Boucher, as seen in the 1758 painting The Dovecote now in the Saint Louis Art Museum, obj. no. 75:1937; and the engraving Paysage au Pont et au Pigeonnier by Pierre François Laurent, after Boucher, now in the Metropolitan Museum of Art, New York. A VERY RARE CHELSEA LARGE POT-POURRI IN THE FORM OF A RUINOUS DOVE-COTE, CIRCA 1756
Lot Closed
Lot 194