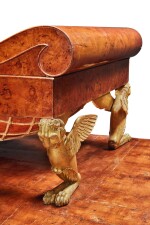 With general overall marks, nicks, surface scratches, losses and repairs consistent with age and use. The veneers with scattered fraying, lifting, and areas of losses and signs of infill and restorations. Notable shrinkage cracks to veneer on domed underside. Half of veneers on domed underside are lacking, presumably the part that would be against a wall and thus out of sight. Old inactive wormholes present, as expected with age. Minor areas of dirt accumulation in crevices. Plinth on wheels. Giltwood winged lion supports with scattered old inactive wormholes, chips, small losses, and flaking to surface decoration and some scattered age cracks. A few old repairs and one with old break to wing now loose in need of re-gluing.

Tuscany remained an important centre for neoclassical furniture design in the first quarter of the 19th century, with Florence and Lucca the main cities of production under the patronage of Napoleon’s sister Elisa Bacicocchi, Princess of Piombino and Lucca and Grand Duchess of Tuscany (1777-1820). Elisa embarked upon a programme of refurbishing the duchy’s official residences, firstly using the French émigré Jean-Baptiste Youf (d.1838) and then the Florentine Giovanni Socci (active 1807-1840). Both continued to supply ducal and aristocratic palaces after the fall of Napoleon and return of the Habsburg-Lorrain and Bourbon-Parma rulers to Tuscany, aided by local cabinetmakers including Giuseppe Colzi and Jacopo Ciacchi.

The distinctive inverted dome on the present lot appears on several pieces of furniture created in Florence in c.1820, including a round stool by Ciacchi in the Villa Medici Petraia, Castello, and a console-jardinière by Colzi in the Palazzo Pitti. The giltwood simulated rope netting is a motif also seen on a pair of semicircular commodes imitating drums by Ciacchi in the music salon of the Palazzo Pitti, which gave the room its unofficial name of the Sala dei Tamburi (all illustrated in Worsdale, plates 58B, 59A and 59B).

The Villa Mansi is a 16th-century villa and gardens located in the hills about 12km northwest of Lucca. It was acquired in the 17th century by the silk merchant Ottavio Mansi, whose descendants in the 18th century refurbished the property in the rococo style and employed Filippo Juvarra to design the gardens and hydraulic works. During her residence in Lucca from 1805-1809 as Princess of Piombino, Elisa Bonaparte is known to have visited the villa and admired the neoclassical frescos of the Lucchese painter Stefano Tofanelli.