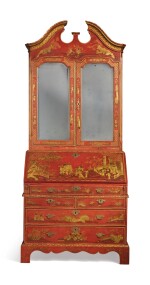 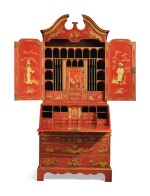 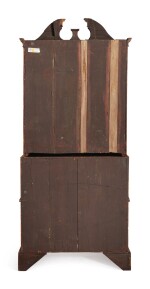 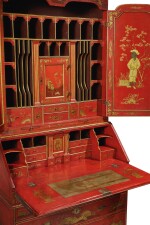 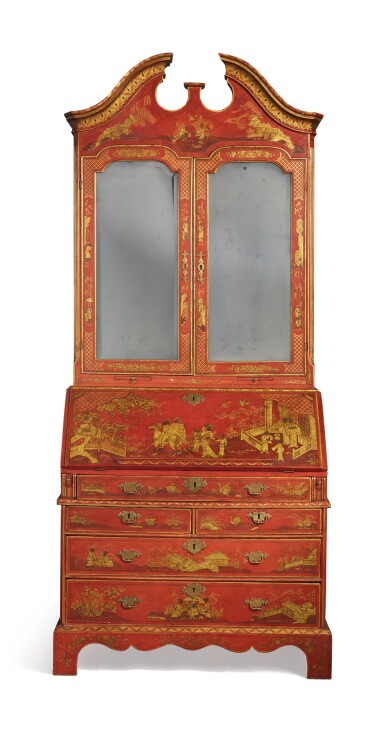 in the manner of Giles Grendey

With four keys. In overall good restored condition; the japanned decoration refreshed and restored though there are large areas where one can see the original decoration intact; lacking finial; mirror plates replaced; the interior of the drawers with later paint to resemble Japanese lacquer; feet and bottom aprons to lower section most probably replaced and with 'antiqued bruises' to the surface; the blocks behind feet are later; lifting and blistering to japanned surface on both sides of upper cabinet which will need attention. Folio slides replaced; the mirror panels behind doors, drawer fronts, and cupboard drawer on interior of upper cabinet repainted.

Grendey's first workshop was at St. Paul's, Covent Garden, moving to premises in St. John's Square, Clerkenwell, in 1722 where he developed a thriving export trade. It was reported in various newspapers on August 7, 1731, including the Daily Post and Daily Advertiser, that Grendey was described as being 'the greatest loser, among the stock destroyed being "an easy Chair of such rich and curious Workmanship, that he had refus'd 500 guineas for it, bring intended, 'tis said to be purchas'd by a Person of Quality who design'd it as a Present to a German Prince' and furniture to the value of £1,000, which he "had pack'd for Exportation against the next Morning." Like much of Grendey's furniture, many pieces retain his printed paper trade label, together with a number of stamped initials which can be identified with the names of his apprentices. These labels and initials have allowed a number of attributions to be made which have expanded his oeuvre, his actual documented work being very sparse. Property from a Private Collection
A GEORGE II RED JAPANNED AND PARCEL-GILT BUREAU BOOKCASE, CIRCA 1735