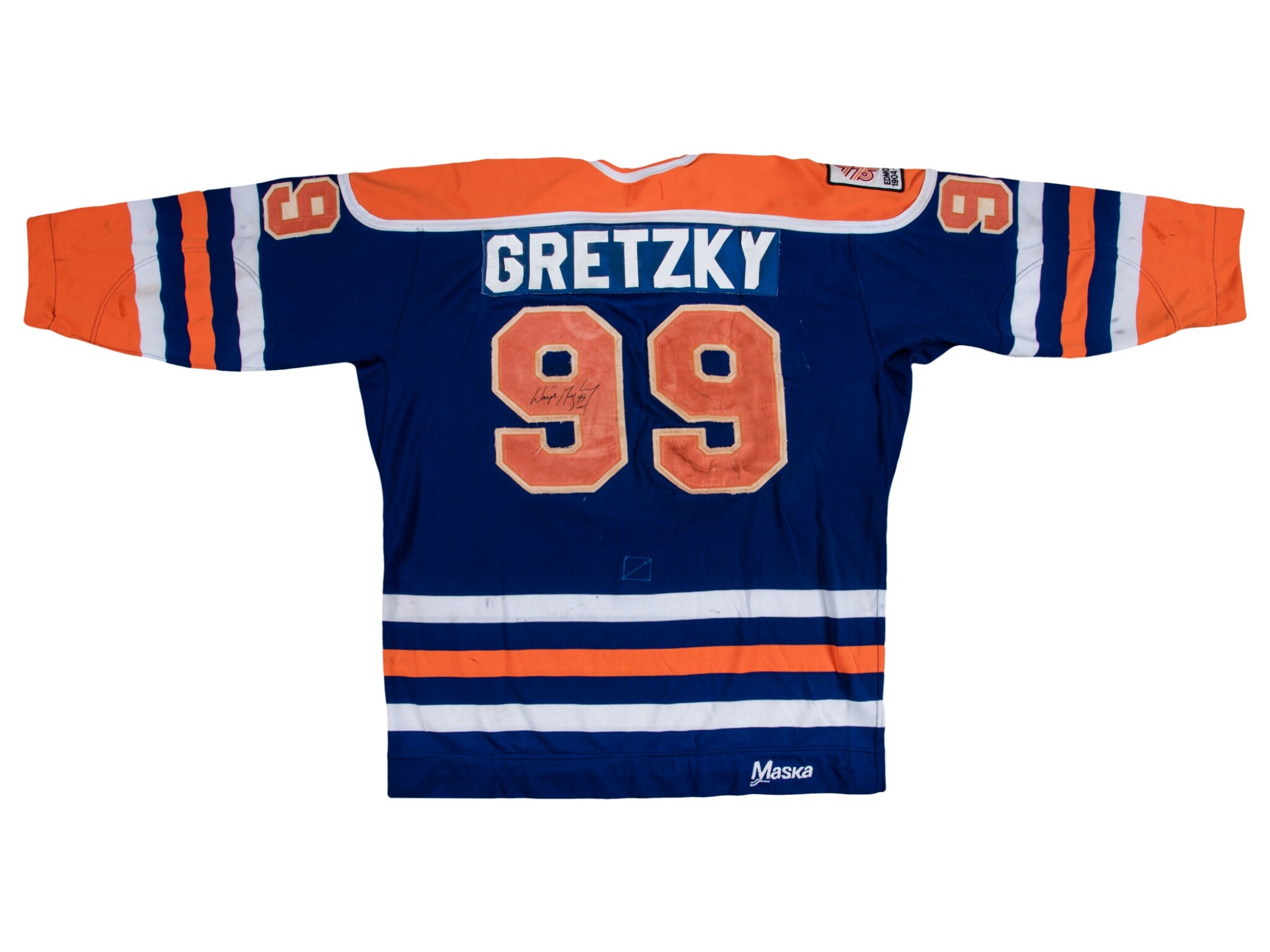 Simply put, Wayne Gretzky is the greatest hockey player to ever lace up the skates. Gretzky entered the NHL with the Edmonton Oilers, when the Oilers were one of the four franchises of the WHA that were absorbed into the NHL starting with the 1979-80 season. Gretzky’s impact was immediate as he would win the Hart Trophy, the NHL equivalent to the league MVP, eight straight years and turned the Oilers’ franchise into a juggernaut that would rule the 1980’s. Presented here is what can be considered the Holy Grail of hockey jerseys – The Great One’s rookie season road jersey worn during his triumphant debut NHL season of 1979-1980. As a 19-year-old, Gretzky blitzed the NHL with 51 goals and a league-leading 86 assists and 137 points.

Unlike baseball or football, photo matching vintage hockey jerseys are quite tough – however the experts at The MeiGray Group believe they have found not one, but two photo matches of The Great One, Wayne Gretzky, donning this jersey during his very first season in the NHL. The first likely photo match can be found on page 52 of the book “Wayne Gretzky: Portrait of a Hockey Player” by Craig Thomas Wolff. Though the nameplate is different than the one now on this jersey, several random yet distinctive marks match the offered jersey. The second, more definitive photo match was found on the cover of a December 28, 1980 dated Vancouver Canucks program. Several clues point to this photo likely being a pre-season shot of Gretzky as the jersey has no nameplate on back, a trait of pre-season Oilers jerseys from that time period. The pre-season photo plus the added nameplate now present on the jersey points to this being worn by The Great One during both the pre and regular 1979-1980 NHL season.

The jersey has the Oilers logo patch sewn on the chest with white and orange striping around the waist and neck opening. Each shoulder has Gretzky’s number “99” in orange and white tackle twill and the right shoulder has the special “EDMONTON 1904-1979” patch, worn only during the 1979-80 season. A Maska Superfil label is sewn inside the collar. The back of the jersey has Gretzky’s number “99” in large orange and white tackle twill and a blue nameplate with “GRETZKY” is sewn across the shoulders. MeiGray Group has deemed this nameplate to have been added sometime after 1979-80 and is not original to the piece. A Maska logo is embroidered on the bottom hem of the jersey. Overall, the jersey shows tremendous use, with some staining and scuff marks throughout. The tackle twill shows fading and puckering from laundering and age and there are loose threads throughout. In short, the piece looks every inch like jersey worn by a tremendously gifted rookie proving himself in his first season in the NHL. To complete this already impressive photo matched rookie gamer, Wayne Gretzky has signed the left “9” on the back in black marker. A significant piece of NHL history, the likes of which comes around but once in a lifetime. The jersey comes with a LOA from The MeiGray Group (150976) for the photo matching and game use and an LOA from JSA (Z83911) for the signature.