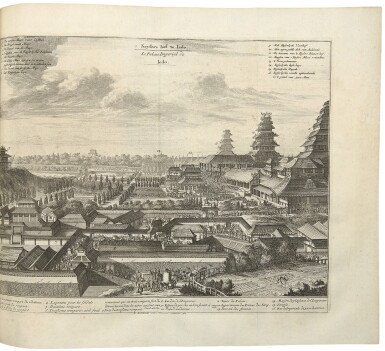 2 volumes in 1 small folio (12 1/8 x 7 5/8 in.). Engraved portrait frontispiece, titles printed in red and black, 44 engraved maps, plans and views, 31 of which folding, 19 in-text engraved illustrations. Contemporary calf, spine with raised bands in seven compartments, red and green morocco lettering pieces in the second and third, the others with a repeat decoration in gilt, marbled endpapers and edges.

Anoted illustrated work on Asia, including maps and views of India, China, and Japan

"Johann von Mandelslo was a friend of Adam Olearius and a former page of the Duke of Holstein-Gottorp. Together Mandelslo and Olearius were sent by the Duke on an embassy to the Russian Czar and to the Shah of Persia [for the purpose of initiating trade relations with Russia, Tartary and Persia]. Mandelslo was authorized to leave the embassy in Persia and to continue his travels to the Far East. He went to Surat, Agra, and Goa in India, where he received great kindness from the English merchants, and he also visited Ceylon. He gives long accounts of the other parts of the Far East, which he did not visit personally. His return was made to England by sea via the Cape of Good Hope, which he visited in 1639" (Hill).

Mandelslo's narrative contains substantial information on the Far East. "Before his death, Mandelslo had entrusted his rough notes to Olearius, who subsequently published them bound with his numerous official accounts of the embassy" (Howgego). Following the first publication, Olearius added additional information to subsequent editions. A new edition in French translated by Wicquefort included still more additional material, including an account of the travels of Henri de Feynes to China, Formosa and Japan. The present edition published in Amsterdam in 1727 is a re-issue of the Van der Aa edition of 1719 (published in Leiden); both are celebrated as the best editions, being the most complete and with the largest number of illustrations. The plates include views and plans of London, Amsterdam, Brussels, Antwerp, Capetown, Goa, Surat, Jedo (Tokyo), St. Helena, Mauritius, Madagascar, the Canary Islands, Java, Congo and elsewhere.