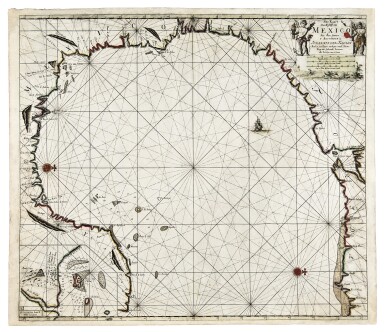 Van Keulen's 17th century chart of the western Gulf of Mexico, oriented with west toward the top of the page

Van Keulen's rare chart of the western portion of the Gulf of Mexico "covers the coastline from the panhandle of present-day Florida around to the Yucatan peninsula. The main feature of this map is its originality of form. It is the first sea chart of the western portion of the Gulf of Mexico detailing the coastal waters of present-day Florida, Alabama, Mississippi, Louisiana and Texas. The geography is largely derived from the exceedingly rare Hessel Gerritz chart of c. 1631" (Burden). As expected, most of the toponyms are Spanish and the mouth of the Mississippi is labelled Baja de Spirito Sancto. Oriented to the west, "it represented the most sophisticated rendering of the coast then available" (Martin & Martin). The Texas portion of the coastline, along the top of the map, begins at "Rio Bravo" (Rio Grande) gives an indication of the many rivers that flow from Texas into the Gulf, though of course the names have been changed.

Burden's second state, with the page number "14" added to the lower left corner, but before later additions and re-engravings.

Burden, The Mapping of North America II: 592; Martin & Martin, Maps of Texas and the Southwest 85, plate 11