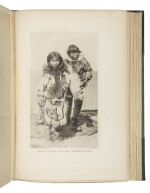 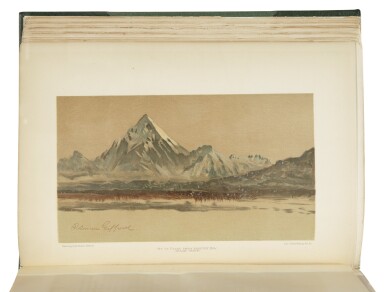 A nearly complete set of Edward Harriman's expedition to Alaska, with photogravures after Edward Curtis and heliotypes by Louis Agassiz Fuertes. Harriman, an American railroad executive, followed his doctor's orders to take a vacation, and planned a two-month journey from Seattle to Siberia and back. Harriman brought with him scientists, conservationists, and artists selected by Clinton Hart Merriam, who was at that time head of Ornithology and Mammalogy at the USDA, and who would become one of the founders of the National geographical Society. Harriman had the steamship SS George W. Elder refitted for the expedition. John Muir, Edward Curtis, and others travelled with Harriman aboard the SS George W. Elder, a steamship with a library containing over 500 volumes on Alaska, a stable for animals, taxidermy studios, and luxury rooms for the team.

Volumes VI and VII were never printed, and complete sets are infrequently offered at auction.