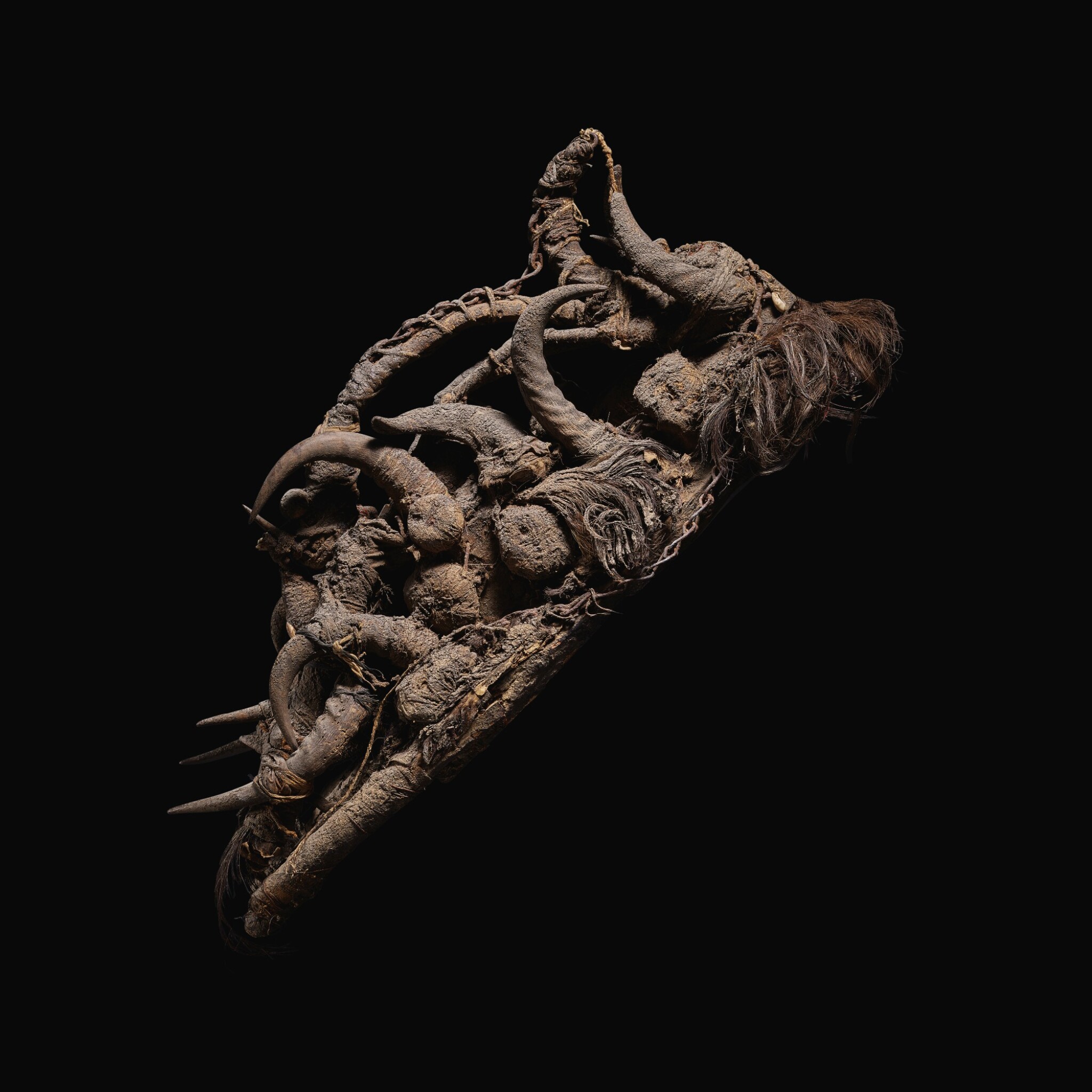 Very good condition overall for an object of this age and rare type and medium. Ritual attachments to wood mask are loose in places, encrusted, and somewhat fragile but all largely intact, except for one apparently missing horn in the center. One side of the mask is cracked with a native repair made using metal staples, visible on the reverse of the mask. Losses to the edges, including one larger worn section to one side. Other scattered marks, nicks, scratches, abrasions, and small losses. The underside drilled for attachment to modern stand.

Known mostly through the writings dedicated to the Bamana initiation society of the Kòmò, this powerful association "holds many secrets, practices and esoteric knowledge about the relationship between Man and the world. [It] acts as a police force to fight crime, but also as a judicial body to resolve cases facing the community. [It] also offers initiates protection against disease, misfortune, the actions of malicious spirits and those of antisocial sorcerers" (ibid., p. 175). As Susan Elizabeth Gagliardi superbly demonstrated in Senufo Unbound: Dynamics of Art and Identity in West Africa, the catalogue accompanying the 2015-2016 exhibition Senufo: Art and Identity in West Africa, this institution transcended the borders created by colonial partition and established itself both in Bamana (Mali) societies and in those traditionally referred to as Poro in Senufo country (Côte d'Ivoire).

The mask presented here is a wonderful illustration of McNaughton’s description of "the exquisitely horrific headdress [...] [which] unites animal motifs and organic materials into a spectacular creature that includes bird, hyena, crocodile, antelope, and more  [Their strength] is subsequently nourished with regular programs of sacrifice (sònni), the residues of which grow across the surface of the headdresses, making them progressively more awesome to behold and more potent to engage." (Patrick McNaughton, in Jean-Pierre Colleyn, ed., ibid., p. 175, p. 178)