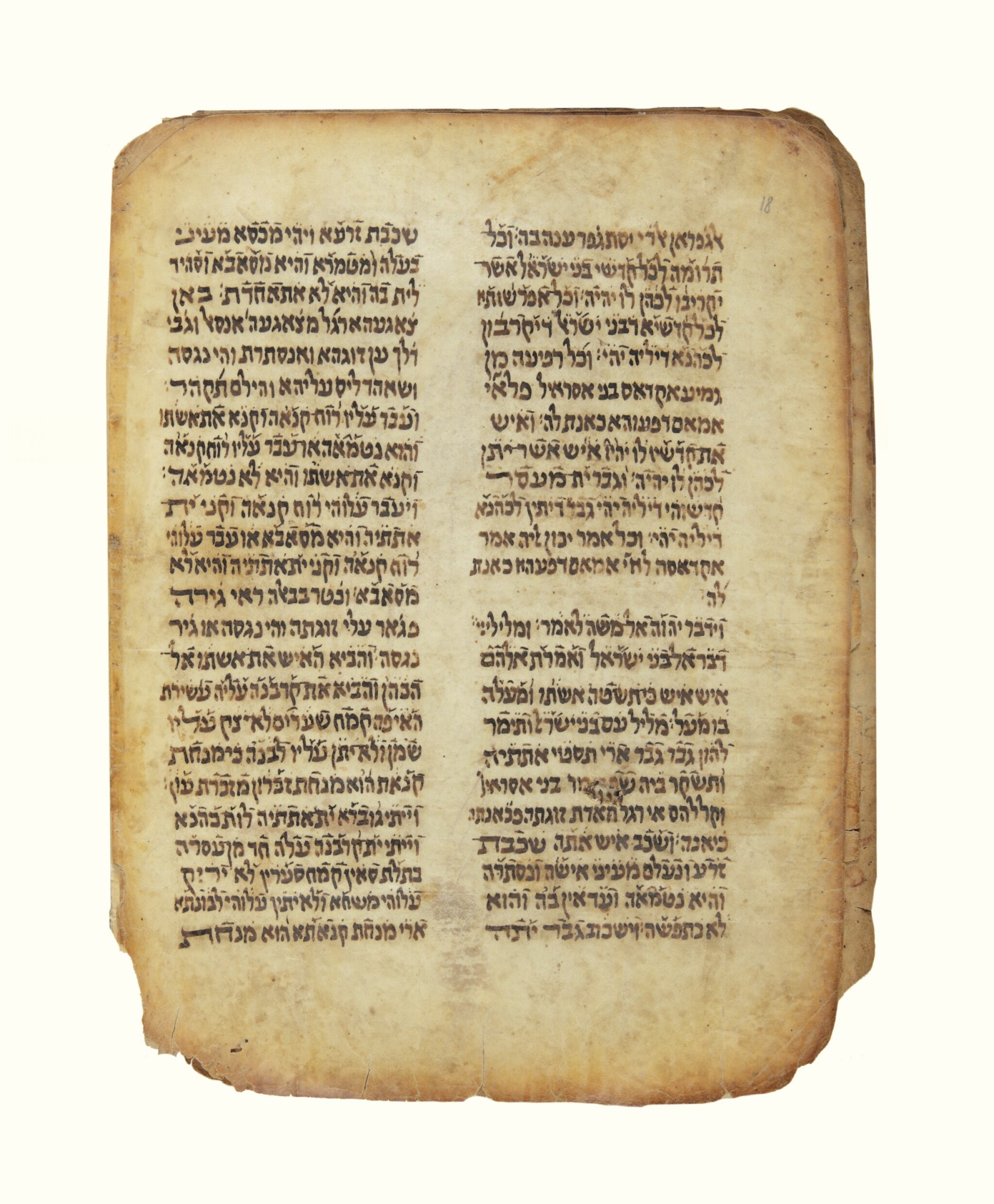 150 of about 180 pages (12 1/2 x 9 3/8 in.; 318 x 237 mm) (collation indeterminate) on parchment; modern pagination in pencil in Arabic numerals in upper-outer corners; written in Yemenite square script in brown ink; double-column text of twenty-four lines per column; ruled in blind (remnants of prickings often visible); justification of lines via dilation or contraction of final letters and use of anticipatory letters; biblical text and Aramaic Targum vocalized using Babylonian (superlinear) vowel points; no catchwords; corrections in hands of primary and subsequent scribes, including some text filled in in the margins (e.g., pp. 43, 133) and erased on pp. 21, 137; intermittent addition of marginalia (e.g., pp. 86, 93, 95); episodic marginal pen trials. Tetragrammaton generally represented via three yodin in a row supported by a Tiberian pattah or kamats and surmounted by a dot or Babylonian kamats; pe added to lines intentionally left blank in order to indicate that they were not simply skipped; stylized marginal samekh at the end of each seder accompanied by the number of verses in that seder (pp. 12, 33, 50, 67, 82, 89, 96, 112, 132, 148); marginal masoretic kerei notations on pp. 59, 68, 114, 143; lines where Targum begins are marked with a marginal dot on pp. 96-112. All leaves mounted on guards and taped in gutters; parchment has darkened significantly at times; short tears in outer edges; corners rounded, rounding of inner corner at foot sometimes slightly affecting text; slit extending from gutter on pp. 13-14; small holes on pp. 17-18, 49-50, 63-64, 73-74, 119-120, affecting several words; pp. 23-24 creased with small hole in text; short tear in center of pp. 51-52, affecting a few words; columns of text outlined in green on pp. 67-75. Modern brown buckram; paper ticket with manuscript name on spine; shelf mark lettered in gilt on spine; modern paper flyleaves and pastedowns.

One of only a small number of known early Yemenite copies of the Tafsīr to a substantial part of the Torah.

In the Second Temple period, with Jewish knowledge of Hebrew in decline, an acute need was felt for the translation of the Scriptures into the vernacular. The two most famous ancient Jewish versions, the Greek Septuagint (third-second centuries BCE) and the Aramaic Targum (first-second centuries CE), would give generations of the faithful access to biblical law, legend, and wisdom. Following the seventh-century Muslim conquest of large swaths of the Middle East, however, Arabic became the lingua franca of much of the Jewish world. Having been asked sometime in the early tenth century to render the Bible into Arabic, Rabbi Saadiah Gaon proceeded to compose the Tafsīr (lit., commentary), a semi-free literary translation that has been described by the eminent modern scholar Joshua Blau as “an authoritative version with a comprehensive worldview.”

While the Tafsīr to the Torah spread widely among Eastern Jewish (and even Samaritan and Coptic) communities in the first few hundred years after it was written and exerted much influence upon them, by the thirteenth century it had begun to be replaced in many regions by local spoken dialectal variant translations known as shurūḥ (sing. sharḥ) that were based on the Tafsīr but adopted a much more literal translation style suitable for the education of schoolchildren. In Yemen, however, Rav Saadiah’s prestige and cachet were such that the Tafsīr continued to copied in biblical codices, particularly manuscripts of the Pentateuch, Five Scrolls, and haftarot (lections from the Prophets). It was studied within certain circles in and around Sana’a and sometimes taught to youth, for whom it became a sacred, almost canonical text meant to be memorized. There were even those who read the Tafsīr, along with the Targum, in fulfillment of the Talmudic dictum: “One should always complete one’s [study of the weekly] portions together with the community, twice from the Bible and once from the translation” (Berakhot 8a).

The present lot is an early copy of most of the book of Numbers in which every biblical verse is followed first by its Aramaic Targum and then by the Arabic Tafsīr. As with many medieval Yemenite manuscripts, the vocalization system used here is Babylonian (superlinear). Several scholars have argued that the Yemenite branch of Tafsīr textual transmission is highly faithful to the (presumed) original version as formulated by the ga’on himself, and Doron Ya‘akov has recently demonstrated that the earlier the manuscript, the more faithful it is. Given that the number of extant fourteenth-century (or earlier) Yemenite copies of the Tafsīr to a substantial part of the Torah is small—it appears that fewer than ten copies are known—the Sassoon exemplar serves as a valuable witness to the authentic text of one of the monuments of medieval Jewish civilization, or, to again quote Blau, “one of the most trailblazing works of our culture.”

Sotheby’s is grateful to Doron Ya‘akov for providing information that aided in the cataloging of this manuscript.