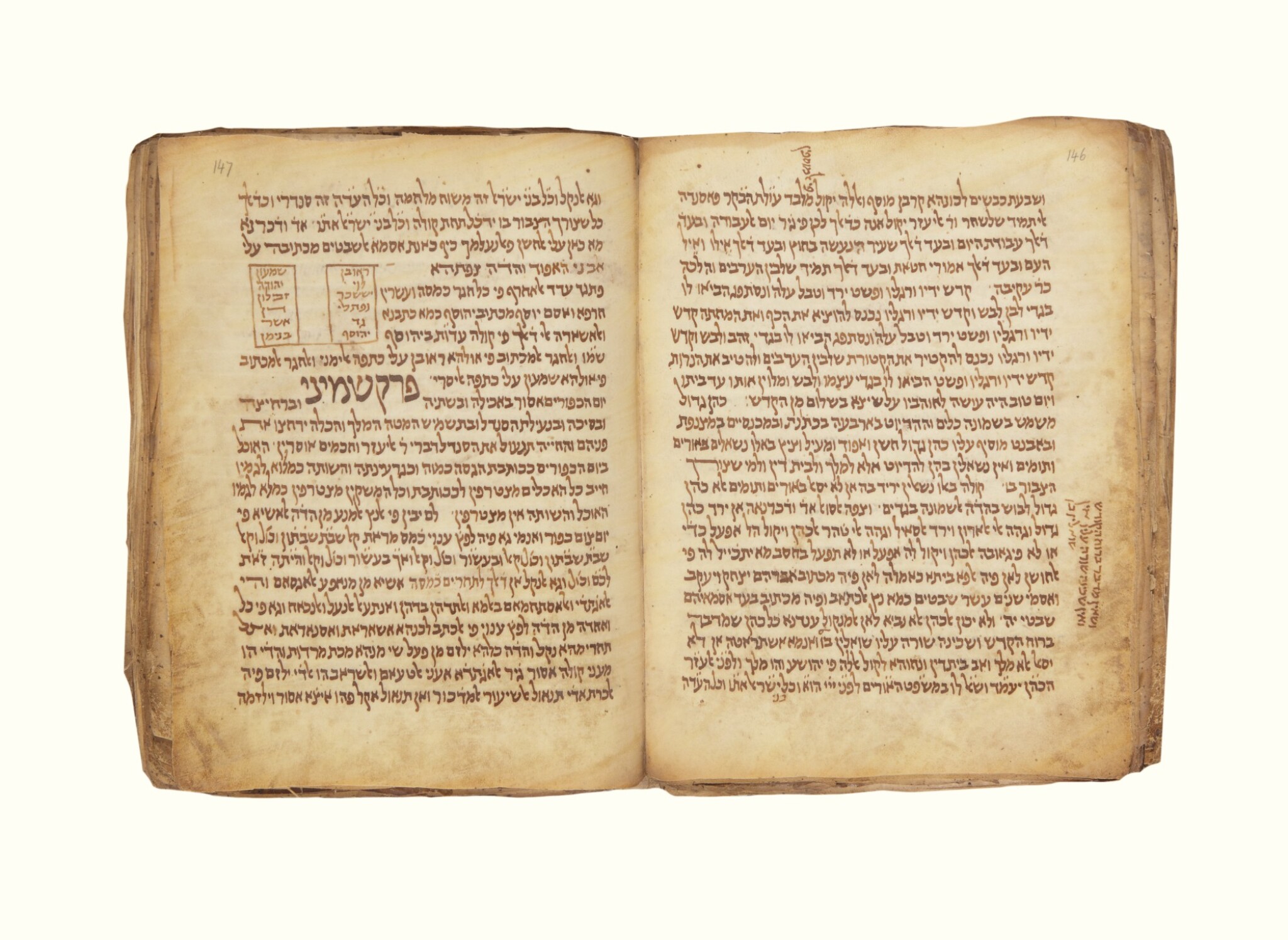 232 of about 366 pages (9 1/8 x 6 7/8 in.; 231 x 175 mm) (collation indeterminate) on parchment; modern pagination in pencil in Arabic numerals in upper-outer corners; remnant of signature(?) in ink in gutter at head of p. 67; written in Yemenite square script in brown ink; single-column text of twenty-two to twenty-four lines per page; ruled in blind (remnants of prickings visible, e.g., on pp. 5-6); justification of lines via dilation or contraction of final letters, abbreviation, and insertion of space fillers; no catchwords; corrections in hands of primary and subsequent scribes, including some text inscribed perpendicularly to the main body of the text; episodic addition of marginalia or vocalization. Enlarged tractate titles and chapter numbers; Tetragrammaton generally represented via three yodin in a row; words of biblical verses usually dotted; diagrams on pp. 5-6, 58, 61, 84-88, 122, 147, 152, 157, 160. Slight scattered staining (though more pronounced on, e.g., pp. 99, 202); intermittent dampstaining (see, esp., pp. 153-154); some ink chipped or worn; some ink transferred from one page to the one facing it; gutters periodically reinforced; parchment leaves of various sizes, at times with short tears in their outer edges and small, natural holes in their centers; lower margins of pp. 5-20, 23-30, 35-42, 51-54, 59-60, 63-66, 175-176, 193-194 shaved, usually not affecting text; tiny hole on pp. 151-152, affecting only individual letters. Modern brown buckram; paper ticket with manuscript name on spine; shelf mark lettered in gilt on spine; modern paper flyleaves and pastedowns.

One of only ten known copies of a significant portion of Maimonides’ original Judeo-Arabic commentary on Seder mo‘ed from before the fifteenth century, and the only one held privately.

Rabbi Moses Maimonides (Rambam; 1138-1204) was one of the most illustrious Jewish figures of all time. Born in Cordoba, Spain, he fled persecution at the hands of the Almohads in the late 1140s, eventually moving first to Fez, Morocco, and later settling in Cairo, where he remained until his death. His reputation rests upon his excellence in a wide variety of fields. Not only was he a halakhist and communal leader of the first rank, he also wrote highly important works of medicine and Jewish philosophy that, like the rest of his oeuvre, achieved wide circulation.

While Maimonides’ influence was felt near and far, Yemenite Jewry developed a special relationship with him beginning in about 1173 when he penned the famous letter that came to be known as Iggeret teiman. At the time, the Jews of Yemen were enduring a dual crisis: the country’s Shi‘ite ruler initiated an anti-Jewish persecution campaign, which then prompted a false messiah to begin preaching the imminent advent of the messianic age. In despair, the community turned for guidance to Rambam, who in his response rejected the false messiah’s claims and encouraged Yemenite Jewry to remain steadfast in its faith in the truth of Judaism and in the forthcoming arrival of the true messiah. Because of his support to them in their hour of need, Maimonides attained an almost saint-like status among the Jews of Yemen, who hand-copied his works assiduously for centuries thereafter. In many cases, their earliest manuscripts provide us with the most authoritative and most accurate versions of Maimonides’ words. The Sassoon collection includes several Yemenite Rambam codices, as outlined below.

The present lot is a copy of the second Order of the Mishnah, Seder mo‘ed, accompanied by the Judeo-Arabic commentary of Maimonides. By his own testimony, Rambam composed his gloss beginning at age twenty-three and completed it seven years later, in 1168, during his first year in Egypt (though he would continue to revise it throughout his life). In this work, the earliest commentary on the entire Mishnah extant, the author aimed to elucidate the text in light of its Talmudic interpretations (though he at times deviated therefrom) and ultimately to arrive at a practical halakhic ruling. In this way, the commentary served as a type of introduction to Talmudic studies and a precursor to Rambam’s magnum opus, the Mishneh torah. The work also included a number of synthetic essays that systematically outlined the foundations of various areas of halakhah and Jewish thought.

While the commentary was ultimately translated into Hebrew in order to make it accessible to a wider audience, Yemenite Jews were among the few groups to preserve Rambam’s text in its original language. Even the layout of the present exemplar, with its enlarged in-line chapter headings, parallels that of Maimonides’ autograph manuscripts. Only ten substantial pre-fifteenth-century copies of the Judeo-Arabic commentary on Seder mo‘ed are known to have come down to us, and of these the present lot is the sole example in private hands.