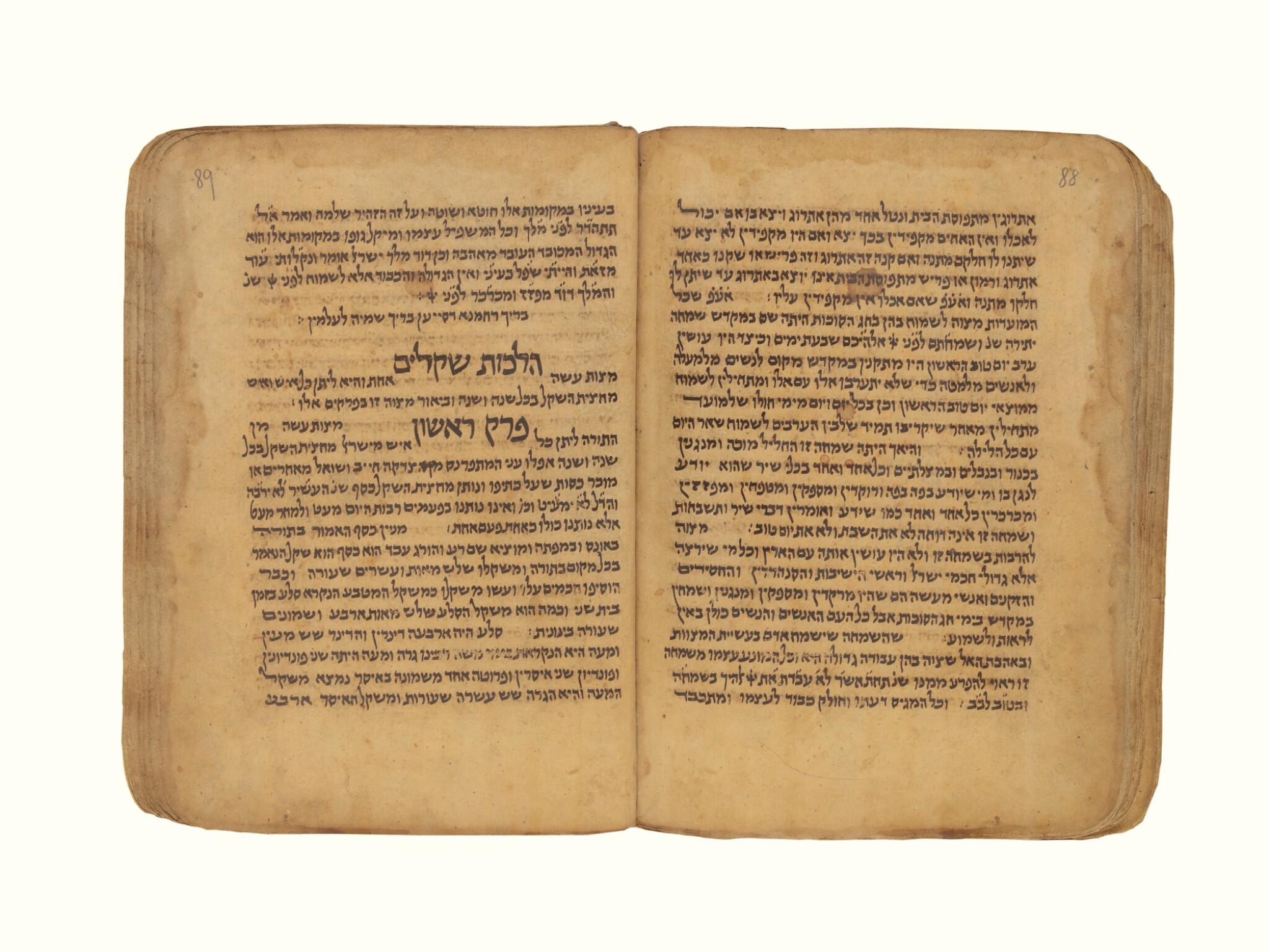 One of about twenty substantial pre-fifteenth-century Yemenite copies of Sefer zemannim to have come down to us.

Maimonides began writing his magnum opus in about 1170 in response to the persecutions visited upon Jewish communities in Europe and elsewhere and the resulting decline in halakhic knowledge. The work set out to organize all the halakhic material scattered throughout the Mishnah, Tosefta, midrashim, and Jerusalem and Babylonian Talmuds into fourteen synthetic books (emphatically not commentaries), which were then subdivided into eighty-three treatises comprising a total of one thousand chapters. This included even those laws no longer applicable in the post-Temple era, as well as those observed only in the Land of Israel–a major innovation when compared with previous halakhic compendia. Rambam titled his project Mishneh torah (lit., Repetition of the Torah), “because a person will first read the Written Torah [Bible] and later read this, and in that way he will know the entire Oral Torah without having to consult any other book in between.”

Unlike Maimonides’ other works, which were written in Judeo-Arabic, the Mishneh torah was composed in clear, lucid Mishnaic Hebrew, making it accessible to scholars and laymen alike, as well as to Jews across the Diaspora, including those living outside of the Islamic milieu. Its prestige derives not only from the authority of its author but from its comprehensiveness and its masterful, intuitive organization. Following its initial publication ca. 1180, the Mishneh torah would go on to exercise enormous influence on Jewish thought and practice, especially after Rabbis Jacob ben Asher (ca. 1270-1340) and Joseph Caro (1488-1575) elected to use it as one of the pillars upon which they structured their own vastly important halakhic codes, the Arba‘ah turim and Shulhan arukh, respectively.

In the introduction to his edition of Mishneh torah, Rabbi Joseph Kafih, one of the foremost Maimonides scholars of the twentieth century, writes of the Yemenite tradition that during Rambam’s lifetime expert scribes were dispatched from Yemen to copy the great rabbi’s books, including the numerous updates and corrections he made over the years. Because of Yemenite Jewry’s enormous respect for Maimonides and their general conservatism, they refused to alter Rambam’s words based on their own logical deductions, making their manuscripts some of the most authoritative available, especially when compared with the error-filled and censored printed editions.

The present lot is a substantial, consecutive fragment of the third book in the Mishneh torah series, entitled Sefer zemannim, which treats the feasts and fasts of the Jewish calendar. The material here preserved covers the labors prohibited on the holidays, the laws relating to Passover (including the text of the Haggadah), Rosh Hashanah, and Sukkot, the special rules governing the annual donation of a half-shekel required during Temple times, and the procedure for the sanctification of the New Moon. It is one of about twenty extant significant Yemenite copies of Sefer zemannim made before the fifteenth century and thus constitutes an important witness to this fundamental text of Jewish law.

Sassoon 1181 (not catalogued in Ohel Dawid)