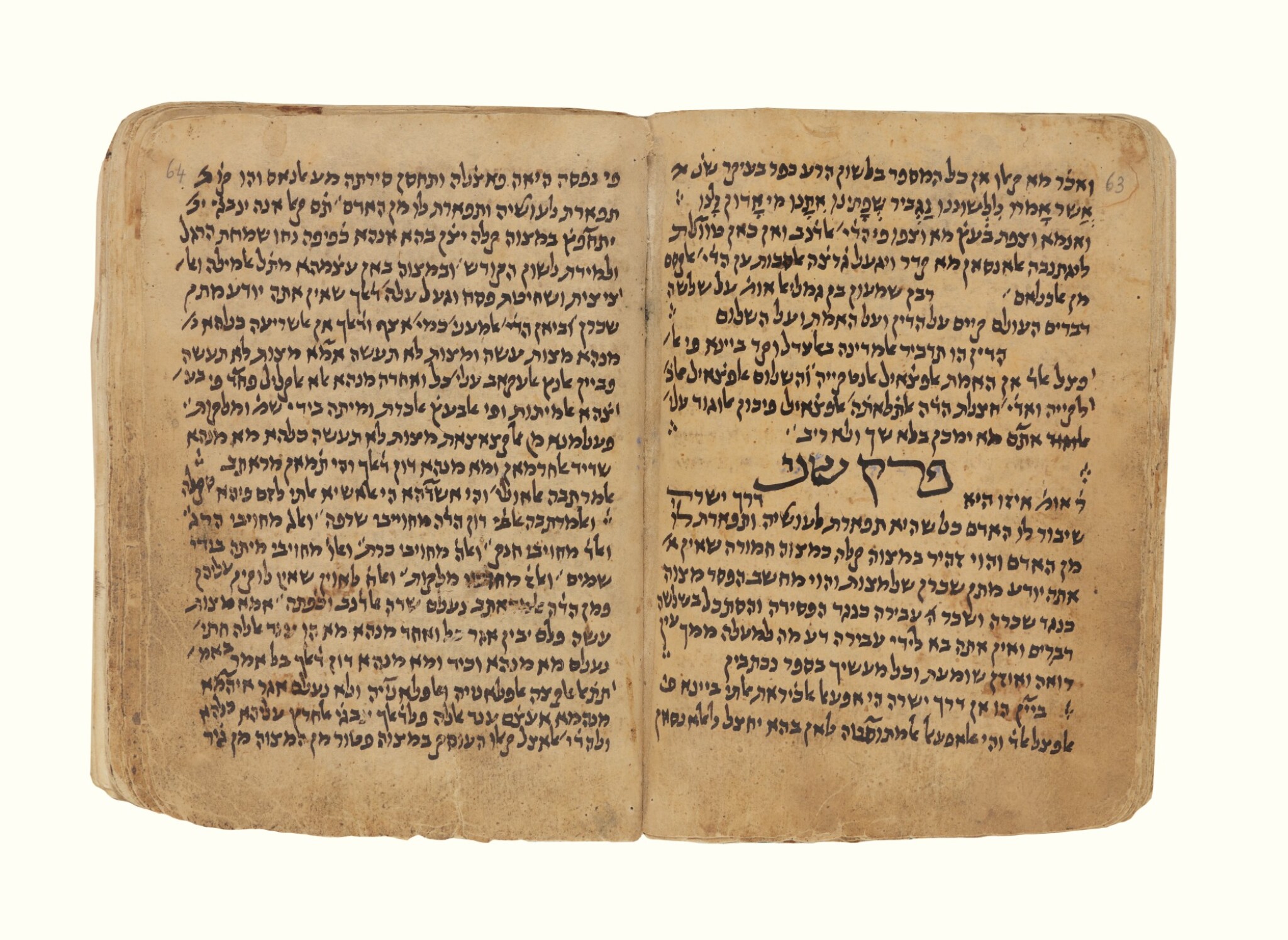 125 of 126 pages (7 3/4 x 5 3/8 in.; 195 x 135 mm) (collation: i9 [i1 lacking], ii-vi10, vii4) on Yemenite (unmarked) paper; modern pagination in pencil in Arabic numerals in upper-outer corners; signatures in gutter at foot of verso and in gutter at head of recto of last and first folios, respectively, of each quire (sometimes shaved); written in Yemenite square (incipits) and semi-cursive (text body) scripts in black ink; single-column text of twenty to twenty-two lines per page; unruled; justification of lines via dilation or contraction of final letters, abbreviation, use of anticipatory letters, insertion of ornamental space fillers, and slanted inscription of final words (producing a “carpet fringes” effect); no headers; catchwords at foot of verso of last folio of each quire (except quire 6, p. 117); corrections in hands of primary and later scribes; episodic addition of both Tiberian and Babylonian vocalization; pen trials on p. 125 (Isa. 42:1). Enlarged incipits; Tetragrammaton generally represented via yod-vav-yod combination; diagram on p. 105. P. 1 and parts of pp. 110-123 filled in in a later hand; scattered staining; intermittent dampstaining; moderate thumbing; some ink chipped or worn; worming at front and rear, though only affecting some words at rear; corners rounded; short tears in outer edges; longer tears on pp. 1-2, 12-13, 82-85, 116-117, 122-123, slightly affecting text; repairs near gutters of pp. 5, 117, 122, affecting some words; gutters reinforced on pp. 15-16, 87-88, 98-100; slit at center of pp. 64-65; line of text added in a later hand at foot of p. 78; pp. 124-125 repaired, with partial loss of colophon. Modern green buckram; paper ticket with manuscript name on spine; shelf mark lettered in gilt on spine; modern paper flyleaves and pastedowns.

One of only nine known complete or near-complete copies of Maimonides’ original Judeo-Arabic commentary on Tractate Avot from before the sixteenth century.

Avot, the ninth tractate in the Order of Nezikin, is one of the best-known rabbinic compositions of all time. Throughout its five chapters, it quotes numerous ancient sages’ ethical and philosophical teachings about how to live a good and righteous life. Recognizing the opportunity this treatise presented to expound his own moral-religious worldview, Rambam appended to it an eight-chapter introduction that has come to be known, literally, as Shemonah perakim. In this work, a kind of synthesis between Aristotelian ethics and Jewish thought, the author touches on such fundamental issues as the composition of the soul, the refinement of human character and intellect, the ideal of the golden mean, the reasons for the commandments, the nature of prophecy, and the apparent conflict between providence and free will. Some of these same questions are also treated in his commentary to Avot itself. Despite the tractate’s immense popularity, Avot with the Judeo-Arabic commentary of Maimonides has come down to us in only nine known complete or near-complete exemplars copied before the sixteenth century, of which the present lot is a fine specimen.