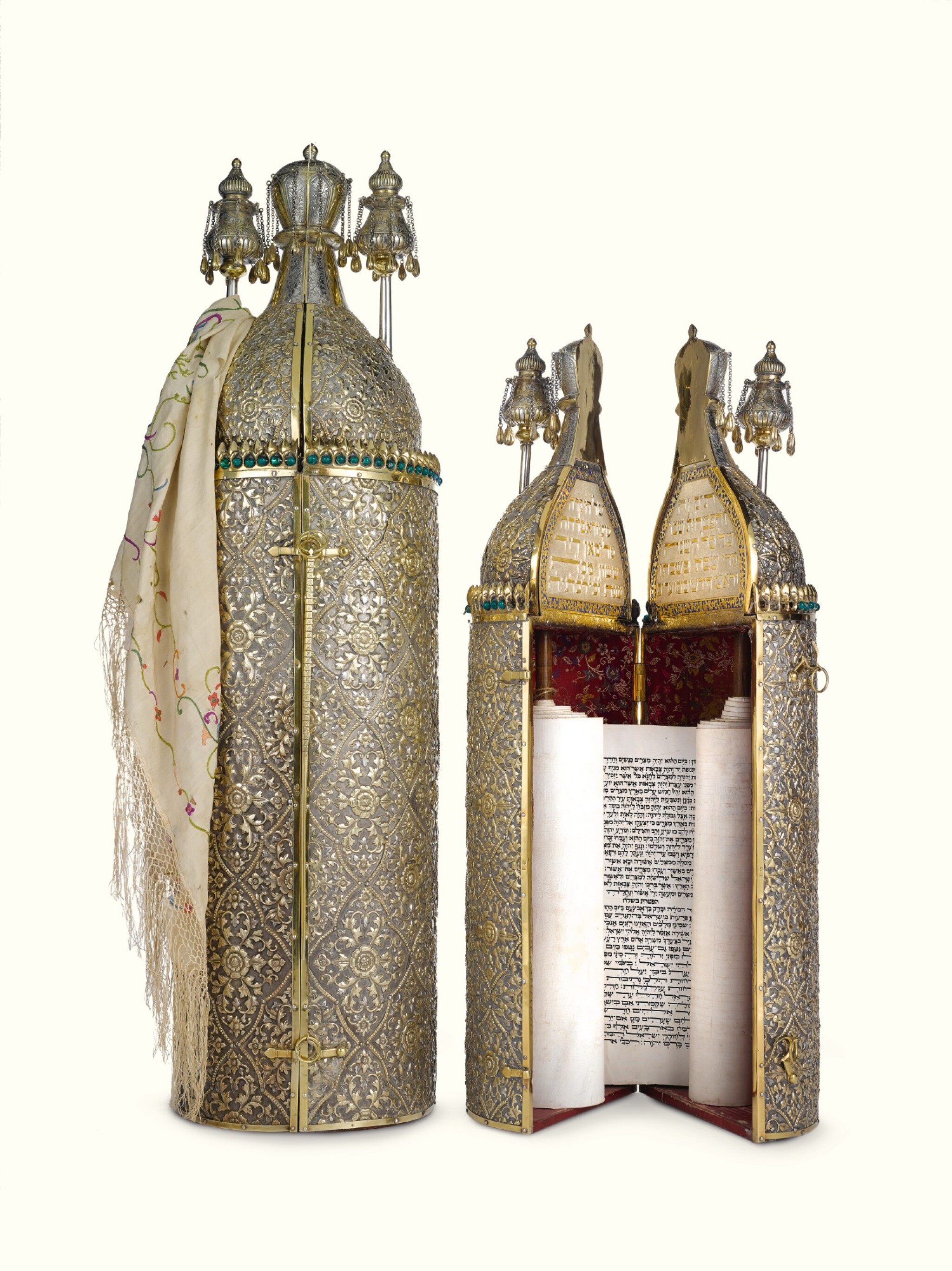 of traditional form in two sizes, each chased with Chinese-style foliage and birds in a trellis pattern, applied with miniature fixed silver Torah Finials flanking the central dome, the gallery of leaf tips set with blue and green glass beads, the interiors with relief Hebrew inscriptions within bands of blue and green enameled leaves, lined with velvet (larger) and floral silk (smaller), containing parchment scrolls and accompanied by two silver-gilt pointers, one pointer marked Gothic K, the other apparently unmarked, and a Torah tik adorned with a mitpahat (traditional silk-embroidered scarf).

minor damage and loss of beads to gallery of smaller, some losses to fabric linings, otherwise good, impressive chasing and rare to have survived with fittings scarf with some holes and stains

The Hebrew inscriptions translate as (Torah):

"This is the Torah that Moses set before the Israelites" [Deut. 4:44]. "These are the laws, rules, and instructions that the Lord established, through Moses on Mount Sinai, between Himself and the Israelite people" [Lev. 26:46]. This tik and the Torah scroll within it belong to the precious Señora Farha [wife of] Sliman David Sassoon, more blessed than the women of the tent, in the year u-verakhtiha [and I shall bless her].(Haftarah):

This tik and the haftarot for the entire year—each Sabbath, New Moon, and festival—within it belong to the precious Señora Farha [wife of] Sliman David Sassoon, more blessed than the women of the tent, in the year u-verakhtiha [and I shall bless her].

In a letter dated March 8, 1888, Rabbi Joseph Hayyim of Baghdad (the Ben Ish Hai) wrote to Flora Sassoon that he was in receipt of a note she had sent him thanking him for a scroll he had recently shipped to her; he also mentioned that a second scroll was in the final stages of preparation and would reach her in time for the upcoming holiday of Shavuot.

Flora's biographer Ben-Yaacob writes in a footnote that "the tik for this Torah scroll was ordered from China in the style of Babylonian Jewry and arrived in Bombay, and the panels were placed in it in 1893." In the embossed Hebrew inscription, the letters marked in the chronogram u-verakhtiha (and I shall bless her; Gen. 17:16) found on both the tiks would yield the year [5]643 [1882-1883]. If we assume, however, that the penultimate letter yod in the chronogram was meant to be marked but was mistakenly left unmarked by Chinese silversmiths unfamiliar with Hebrew characters, the date of these tiks moves up ten years (the numerical value of the letter yod) to 1893. Similar mistakes are common among Chinese artists attempting to render Western heraldry for the armorial export porcelain dinner services of the 18th and 19th centuries.

Thus, in all likelihood, the scrolls were sent to Flora in 1888 and the specially-commissioned tiks were finished five years later, in 1893, at which time the scrolls were placed inside them. Ben-Yaacob prints the text of David Solomon Sassoon's diary which was called Divrei david. In the introduction to the diary, Flora's son wrote that in their synagogue on Malabar Hill in Bombay were kept Torah scrolls housed in expensive tiks. Two of them, a Torah scroll and a Haftarah scroll, were housed in silver-gilt tiks that were made for his mother.

A very similar Chinese Export silver and enamel tik, also marked Gothic K and with an identical Torah Pointer, is in the Gross Family collection. It was ordered in 1886 by another member of the Baghdadi diaspora who settled in India, Nissim Ezra, of a family that was as important in Calcutta as the Sassoons were in Bombay. Like the Sassoons, the Ezras had family and trade connections to Hong Kong and Singapore that would have facilitated the commission and delivery (see Bracha Yaniv, "The Story Behind a Baghdadi Torah Case" in Windows on Jewish Worlds: Essays in Honour of William Gross (Walberg, 2019), pp. 287-298).

Adrien von Ferscht has linked the Gothic K mark with a retail silversmith active in Canton between 1840 and 1875, but its presence here and on the Gross Family tik indicates the firm continued later in the century. Mr. von Ferscht also suggests that the usual accompanying Chinese character may be the "chopmark" of the artisan (see Chinese-Export-silver.com, post of December 5, 2012)

The practice of reading a haftarah (lection from the Prophets) to conclude the public Torah reading service in the synagogue dates back at least to the end of the Second Temple period. In antiquity, haftarot were read from parchment scrolls of individual Prophets (e.g., a scroll of Isaiah, a scroll of Ezekiel, etc.), just like the ones used during the Torah reading service. With the gradual adoption of the codex, many communities, particularly in Christian lands, switched over to this new book technology for reading the haftarot; some, however, maintained an ancient tradition according to which the lections were collected from the various books of the Prophets into a single parchment (sometimes paper) scroll. This sefer aftarta (at times referred to as a sifra de-aftarta) has remained popular among Eastern Jews into modern times. Often, the sefer aftarta, like the Torah scroll itself, is housed in an upright tik kept either inside or, according to some customs, immediately adjacent to the Holy Ark.