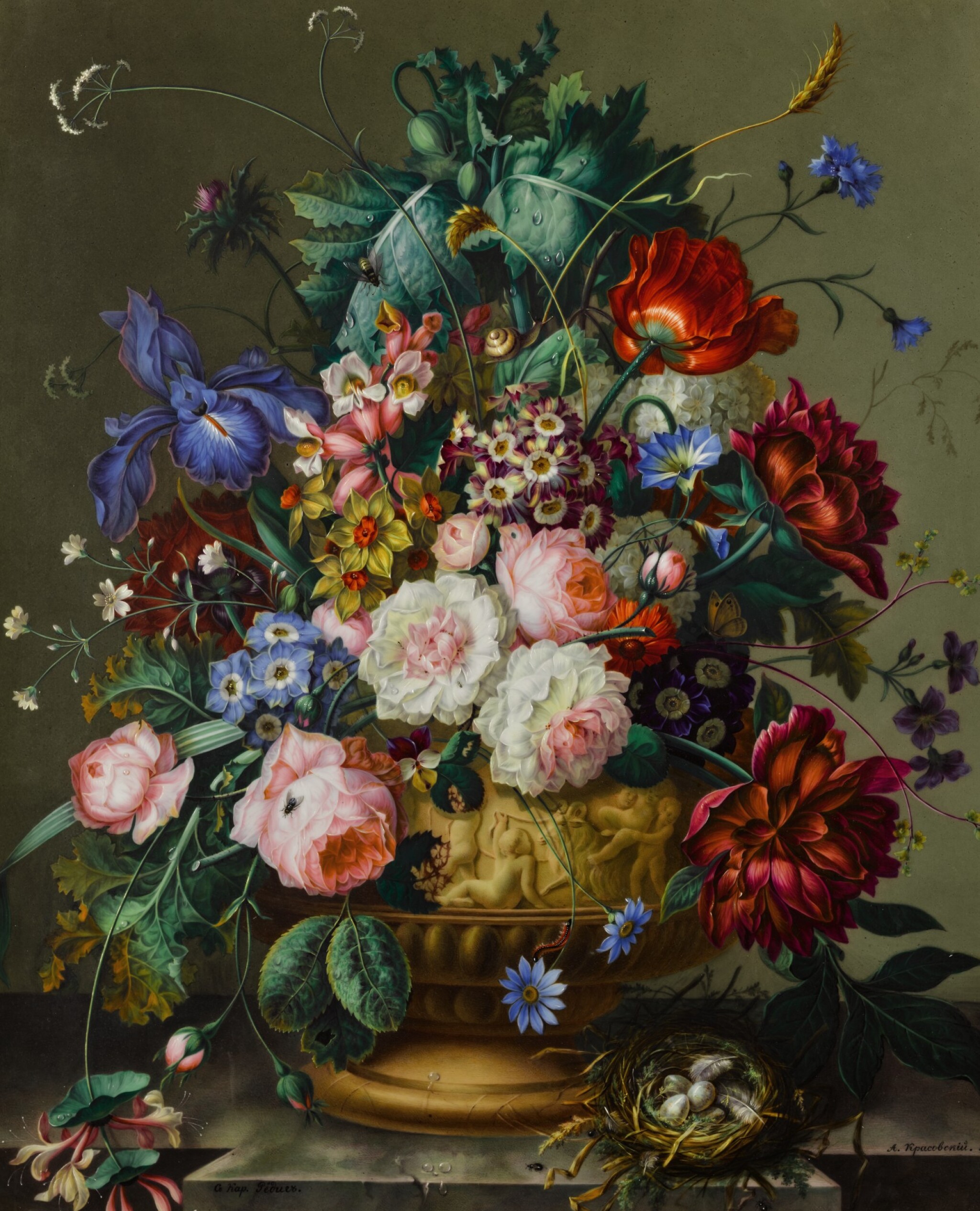 Signed and dated ‘A.Krasovsky 1852’, after a still-life painting by Johann Christian Roedig, with blue Imperial cypher of Nicholas I on the reverse

This magnificently painted plaque was presented by Emperor Nicholas I (1796-1855) to his sister-in-law, Princess Alexandrine of Prussia (1803-1892) as a Christmas gift in 1852. Of astounding size for a work in porcelain and painted by the talented Imperial Porcelain Factory artist, Aleksei Krasovsky this plaque appears on the list of ‘Porcelain Objects, made for the Emperor as gifts for Christmas 1852’, held in the Russian State Archive (fund N.468, list N. 10, file N. 659, p. 17). It is one of only three large plaques of the period known to exist and the only example remaining in private hands: it is exceptional in its provenance, quality and rarity.

Important enough to be reserved as a gift for Christmas, the scale, vibrant colours and exquisite detail of this vanitas bouquet represent the height of the Imperial Porcelain Factory’s production. This plaque was executed by the Imperial Porcelain Factory artist Aleksei Krasovsky, a member the dynasty of flower painters. His older brother, Feodor Krasovsky (1820-1863) was also a master of floral still-lifes and painted the only two other known plaques, one now in the collection of the State Russian Museum of Ceramics in the Kuskovo Estate (Inv. n. GMK FR 17754)and another, executed in 1861, after a painting by Jan van Huysum, that was exhibited at the 1862 International Exhibition in London and is now held in the collection of the Hermitage Museum, St Petersburg (inv. n. MZ-I-880).

Schwerin castle was the family home of the Dukes and Grand Dukes of Mecklenburg-Schwerin and is one of the most important architectural examples of romantic Historicism in Europe, often described as the ‘Neuschwanstein of the North.’ It is possible that the present plaque would have been displayed there during the lifetime of Princess Alexandrine.

During the reign of Nicholas I, large scale works produced by the Imperial Porcelain Factory were decorated with copies of Nineteenth-century and Old Master paintings. Consistent with the European tradition of using academic paintings as porcelain design sources, this large porcelain plaque was a canvas for factory artists to showcase their most superlative work, after important paintings. The paintings were typically scaled-down, faithful copies of original works in the Imperial Hermitage, the Academy of Arts or from collections in the Imperial palaces in the vicinity of St Petersburg. The present plaque is painted after Johannes Christianus Roedig, a Dutch artist, active from 1751 to 1802.

‘…no one has ever painted flowers on porcelain with greater perfection than the Krasovskys.’

Imperial Porcelain Factory artists usually added their names to important porcelain paintings and the present plaque is signed ‘A.Krasovsky 1852’. Aleksei Krasovsky was born in 1825, after beginning his apprenticeship studying porcelain manufacture he joined the painting workshop where he was commended by the factory’s Director for his outstanding achievements and awarded three silver roubles (N.Petrova, Antikvarnoye Obozrenie, Dinastiya Khudozhnikov Krasovskih na Imperatorskom Farvorom Zavode, St Petersburg, 2009, N1, pp. 70-74). He joined the Imperial Porcelain Factory in St Petersburg in 1850 and would become one of the most respected painters during the period of Nicholas I, a Golden Age for the factory. In 1853, at the age of only 28, he completed the decoration of a circular tabletop with botanical studies as an Easter gift from Nicholas I to Grand Duchess Maria Alexandrovna recorded in the Russian State Archive (fund N.468, list N. 10, file N. 666, p. 83)

Like their rivals in Berlin, Sèvres and Vienna, the Imperial factory decorators used still life flower-painting on porcelain plaques to perfectly demonstrate their mastery and skill. Sadly, Aleksei Krasovsky’s early death at the age of just 29 years old meant that in his short career he created very few works. The present lot is therefore a rare testament, not only to this outstanding artist but also to the splendor of the court of Emperor Nicholas I.

Nicholas I and the Imperial Porcelain Factory

Emperor Nicholas I was a passionate patron of the arts and was particularly enthusiastic about porcelain. Under his patronage, the production of the factory reached its apogee and works from this period are the finest examples of monumental porcelain by the Imperial Porcelain Factory. Emperor Nicholas I favoured monumental, colourful and highly ornamental works, such as the present plaque. Impressive plaques, such as the present example, were specific commissions, and thus reflected the Emperor's personal preferences in their design and decoration. The present plaque was a personal gift from the Imperial family to their closest relative, rather than a foreign dignitary, as was so often the case with vases, and thus gives us unique insight into Emperor Nicholas I’s personal taste in porcelain. Emperor Nicholas I was a true believer in the divine power of the monarchy and was a conservative authoritarian, who believed in economic growth and encouraged industrialization. The Imperial Porcelain Factory grew under his patronage; like many of his European counterparts he understood the power and influence of Russian artistic production within dynastic and diplomatic circles, as a direct reflection of the overall wealth and magnificence of their Imperial patron.

We are grateful to Natalia Petrova for her research and contribution to this article.