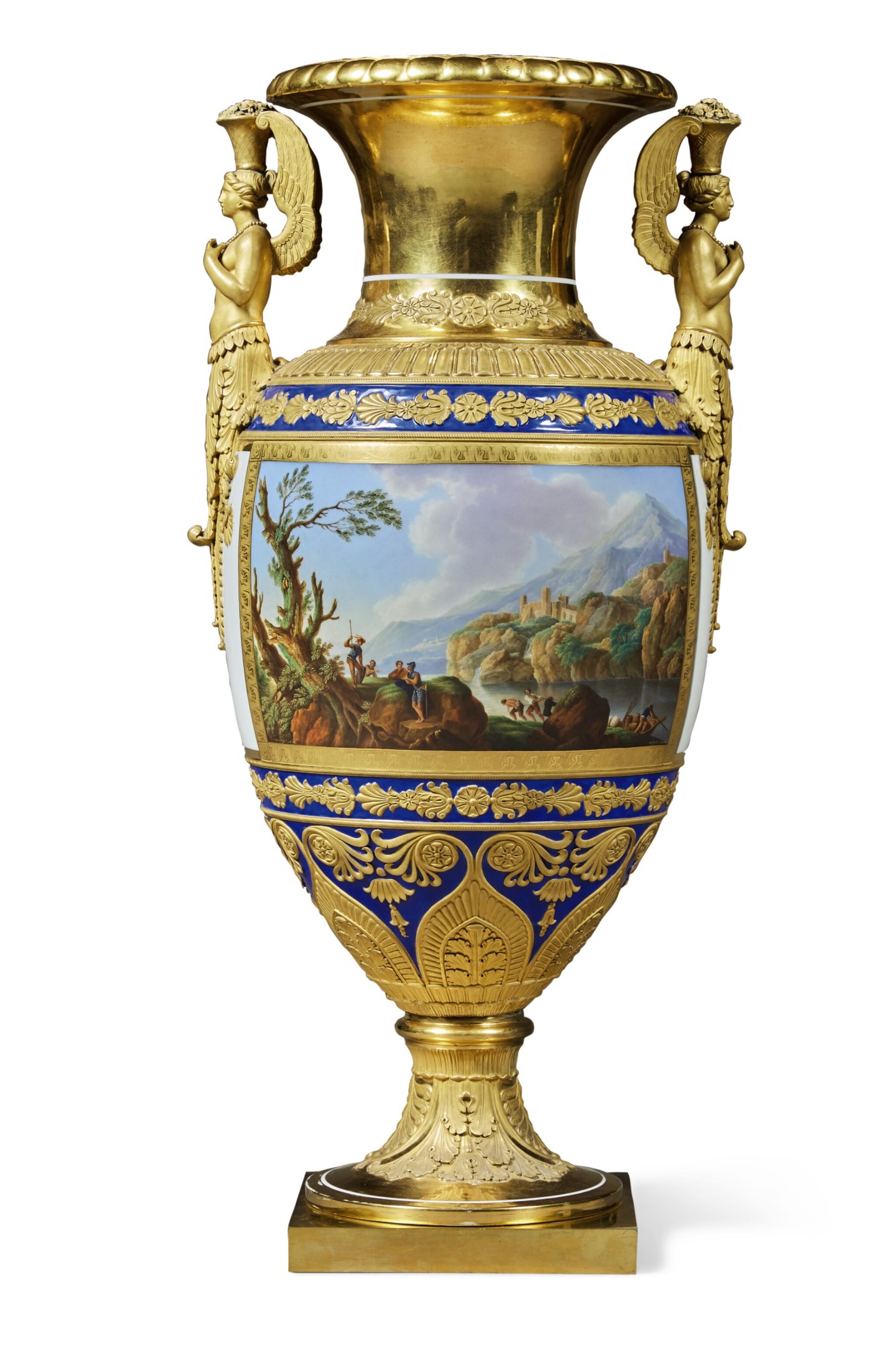 of amphora form, the central reserve finely painted and signed lower left ‘Dietrich’, also signed lower right, probably by Daladugin, the front decorated with elaborate scrolling foliage with acanthus and palm leaves against deep blue background, with gilt caryatid-shaped handles, the reverse with matching décor against white background, gilt flared neck and foot with molded palmettes, on square base, marked with blue Imperial cypher for Nicholas I and dated

This magnificently painted vase, with rare karyatid-formed handles was presented to Emperor Nicholas I for Christmas in 1834. Twice a year, the Imperial Porcelain Factory would present its most important objects to the Imperial family for Christmas and Easter. The offered vase is listed in the registry of presentations to the Emperor for Christmas 1834 as:

As reflected in the Russian State Archive detailing Imperial Porcelain Factory pieces for Christmas and Easter, this vase was a highly important commission and thus reflects the Emperor's personal preferences in its intricate design and decoration.

Conceived as a single, magnificent piece, the form of this vase with elaborately modelled winged handles, spectacular in every detail from their delicate flowers to their scrolling terminals, is a fascinating stylistic mix. The other known vases to have such handles are a pair of vases of the same form, held in the collection of the Peterhof State Museum-Reserve (A pair of vases with mythological scenes, Imperial Porcelain Factory, 1826. inv.no. PDMP 6161-f, 6160-f, Peterhof State Museum, St Petersburg). The sculptural decorations and the shape of this vase are strongly influenced by the French school of porcelain production. In particular, the style is that of the Parisian masters, who distinguished themselves in creating the Sèvres method of production, which had a significant impact on the development of Russian Imperial porcelain. The French masters, D. Moreau, Landel and F. Davignon all worked at the Imperial Porcelain Factory during the reign of Emperor Alexander I. This French influence laid a good foundation for Palace vases, but Emperor Nicholas I encouraged the Imperial Porcelain Factory to pursue more creative, innovative techniques and its own vernacular; this vase is emblematic of those changes. While it conforms to aspects of previous Imperial Porcelain works, this piece also showcases an innovative, more detailed approach to porcelain. Masterful execution of stucco patterns as can be seen in the sculptural qualities of handles, elaborate gilding and magnificent painting in the round make it not only an outstanding example from the Period of Nicholas I, but also a masterpiece of Russian Imperial porcelain.

One of the main aspects of the decoration of porcelain vases was their three-dimensional nature. Traditionally, a special, framed place was given to the elaborate painting of the front of the vase, with the reverse supporting it stylistically. During the reign of Emperor Nicholas I, many of the vases produced by the Imperial Porcelain Factory were decorated with copies of Nineteenth-century and Old Master paintings. Consistent with the European predilection for using academic paintings as porcelain design sources, the middle section of the vase was treated by factory artists as a canvas on which to showcase their work after important paintings. The paintings were typically scaled-down, faithful copies of original works in the Imperial Hermitage, the Academy of Arts or from collections in the Imperial palaces in the vicinity of St Petersburg.

Imperial Porcelain Factory artists usually added their names to the vase paintings and the present vase has two signatures: The lower left is signed Dietrich, after whose painting this composition was made, most probably by Andrei Martynov (1768-1826); the signature on the lower right, although difficult to read, is most likely that of the Imperial Porcelain artist S. Daladugin. The prominent addition of this signature highlights the importance of the factory artist’s personal role in the production of the present vase. S. Daladugin worked in the 1830-1840s in the painting workshop of the Imperial Porcelain Factory and specialised in painting landscapes and figures. In addition to reproducing known canvases on porcelain, Daladugin also painted plates with military scenes in the late 1820s and 1830s.

Andrei Martynov (1768-1826) studied in Semyon Schedrin’s class in the Fine Arts Academy, St Petersburg. After graduating with distinction, he was granted a study trip to Rome and was awarded the title of Academician upon his return to Russia in 1795. During his studies at the Academy, it was common practice to learn from European masters and works by the German landscape artist, Christian Dietrich (1712-1775), had a special place in the Academy’s curriculum. The present vase features a painting by Martynov after a romantic German landscape by Dietrich. The vase is thus painted with Dietrich signature, as a reference to the original painting that inspired both Martynov and Daladugin.

Emperor Nicholas I and the Imperial Porcelain Factory

Emperor Nicholas I was a passionate patron of the arts and was particularly enthusiastic about porcelain. Under his patronage, the production of the factory reached its apogee and works from this period are the finest examples of monumental porcelain by the Imperial Porcelain Factory. Emperor Nicholas I favoured grand, colourful and highly ornamental works, such as the present vase. The present vase was a Christmas gift for the Palaces of the Imperial family, rather than for a foreign dignitary, as was so often the case, and thus gives us unique insight into Emperor Nicholas I’s personal taste in porcelain. Emperor Nicholas I was a true believer in the divine power of the monarchy and was a conservative authoritarian, who believed in economic growth and encouraged industrialization. The Imperial Porcelain Factory grew under his patronage; like many of his European counterparts he understood the power and influence of Russian artistic production within dynastic and diplomatic circles, as a direct reflection of the overall wealth and magnificence of their Imperial patron.

This lavishly decorated vase is one of the finest achievements of the Imperial Porcelain Factory, and a truly monumental Imperial Palace piece. The quality of its painting and the sculpting of its form, brought Imperial Porcelain pieces like this truly international fame.

We are grateful to Ekaterina Khmelnitskaya for her research and contribution to this article.