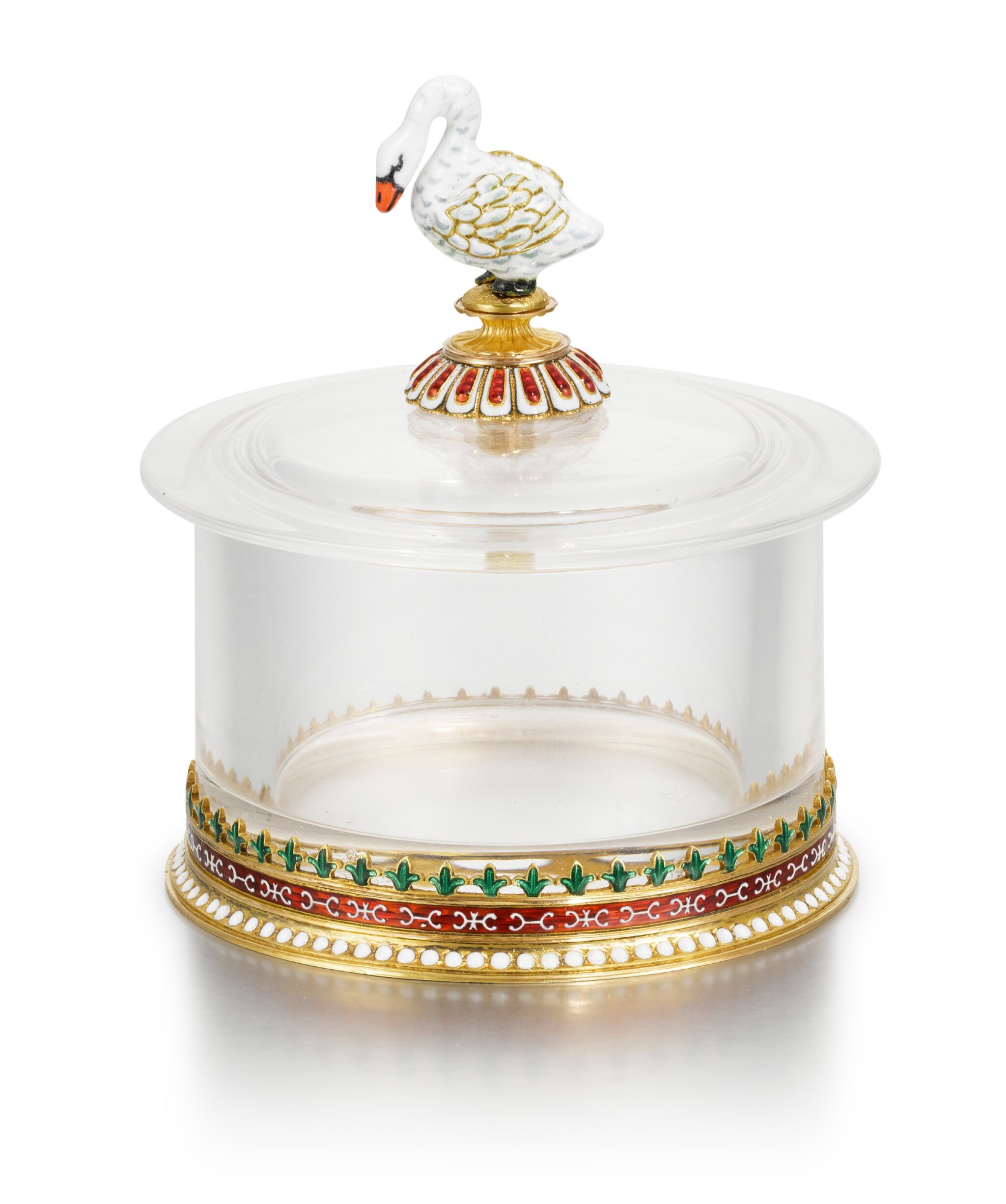 in Renaissance style, circular, the gold base with green and red foliate enamel ornament, with white bead border, the lid handle with finely modelled lightly gilt white swan on a gold base with gadrooned white and red enamelled border, struck on the underside Fabergé in Cyrillic and with workmaster’s initials, 56 standard, with scratched inventory number 48641

Renaissance-style objects are rare in Fabergé’s production, and all known examples, including the present lot, were produced in Perchin’s workshop.

Famously inspired by Karl Fabergé’s admiration of early objects in the Green Vaults, which he studied during his time in Dresden, other examples in this group include: the 1894 Imperial Renaissance Egg; a smoky quartz cup, 1899-1903, purchased by Leopold de Rothschild from Fabergé's London branch in 1912; a rock crystal vase presented by the same collector to King George V and Queen Mary on their Coronation and now in the Royal Collection (RCIN 8949); a covered smoky quartz cup which sold, Sotheby's Geneva, 17 May 1984, lot 667, and Sotheby’s New York, 16 April 2008, lot 411; a large nephrite tray presented by the Dutch Colony of St Petersburg to Queen Wilhelmina of the Netherlands on the occasion of her wedding in 1901 (illustrated, G. von Habsburg-Lothringen and A. von Solodkoff, Fabergé: Court Jeweller to the Tsars, Fribourg, 1979, p. 37); the Monomakh Crown Beaker of jewelled gold and smoky topaz (illustrated, G. von Habsburg and M. Lopato, Fabergé: Imperial Jeweller, London, 1993, p. 259); a charka, its handle comparable to that of the present lot, which sold, Christie's Geneva, 19 November 1991, lot 357; a bowenite charka, sold, Sotheby's Zurich, 19 November 1976, lot 230; a nephrite box (G. von Habsburg, Fabergé: Imperial Craftsman and His World, 2000, no. 351, p. 168 illustrated); and a silver-gilt mounted rock crystal dish of 1896 in the collection of the Hermitage, which is based on the design of a seventeenth-century dish in the Kremlin Armoury.