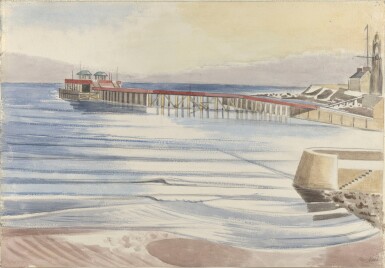 pencil, watercolour and wash on paper

Unexamined out of frame. The sheet undulates slightly and does not appear to be laid down. There are a few Artist's pinholes to the corners and extreme edges. There are one or two tiny flecks of possible surface matter or foxing. There may be extremely minor fading to the yellow pigment. This excepting, the work appears in excellent overall condition with bright vivid colours.

The work is window mounted and held behind glass in a painted wooden frame.

We are grateful to David Boyd Haycock for his kind assistance with the cataloguing of the present work.

Swanage, Low Tide was painted in 1935, the year that Paul Nash was commissioned by the poet John Betjeman to produce the shell guide to Dorset as part of The Shell Guide series. Whilst other editions in the series explored the picturesque, quaint, charming English countryside, Nash undertook a rigorous Surrealist investigation into the county. Dorset was, for Nash, Thomas Hardy country, where the landscape could be cruel and unpredictable, and man was at its mercy. Nash’s Dorset was an ancient landscape, originally inhabited by beasts and monster, in which the very ground was imbued with mythology and legend, rife with prehistoric and historic relics. The collective subconscious and the unheimlich (the uncanny) could erupt into the very fabric of the humdrum everyday at any moment, even whilst gently motoring between Victorian seaside towns.

Nash lived in Swanage with his wife, Margaret, at No.2 The Parade, which still stands and bears a blue plaque for Nash, on the seafront between 1934 and 1936, and the town became the inspiration for a fruitful period of Surrealist works. In his article from April 1936, ‘Swanage or Seaside Surrealism’, Nash described the surrealist juxtaposition of the Victorian seaside architecture with sculpture imported from London set against further incongruous architectural features, all unfolding by the sea. In the previous decade when Nash had lived at the coast, in Dymchurch in Kent, the sea had been threatening and ferocious, a manifestation of trauma sustained in the trenches of WWI. In these works, the sea was the boundary between the calm of the English countryside and the battlefields of France, with the menacing sea always encroaching. In Swanage, and the present work, the sea and the beaches instead represented sources of Surrealist imagery, of creative stimulus, of connection to the Continent and its artistic influences. By 1936, the Dorset coastline took on further significance as the backdrop to Nash’s passionate affair with artist Eileen Agar that was the catalyst for the most experimental and productive period of his career. Together Nash and Agar combed the Dorset beaches and rolling hills inland, photographing, drawing, painting and constructing. 1936 was also the year that London hosted the International Surrealist Exhibition, in which Nash played a leading role, and which really represented the zenith of the participation of British artists in European Surrealism.

In Swanage, Low Tide Nash shows the waves lapping at the shoreline, depicting a scene familiar to any visitor to a seaside town. The pier is the central feature, regular yellow supports leading the eye back towards the platform with its two roofed shelters. The curving seawall with steps to the right foreground contrasts with the angularity of the pier behind, the juxtaposition of practical defense and holiday recreation. To the right, a small house overlooks a rocky beach with a subtle moment of surrealism as the mast of a boat, presumably behind the house as the coastline curves, appears to emanate from the chimney of the cottage. Nash delighted in such visual tricks, that confuse the eye and ask the viewer to look twice or doubt their powers of perception. The seascape is painted in Nash’s quintessential palette of the 1930s, dusky pinks, power blues, sandy yellows, terracotta reds. The watercolour is chalky and its application restrained. The master of the understated, Nash creates a familiar scene and yet, on second glance, one notices details, incongruities, absurdities that render a mysterious atmosphere and a painting that lingers in the mind’s eye.