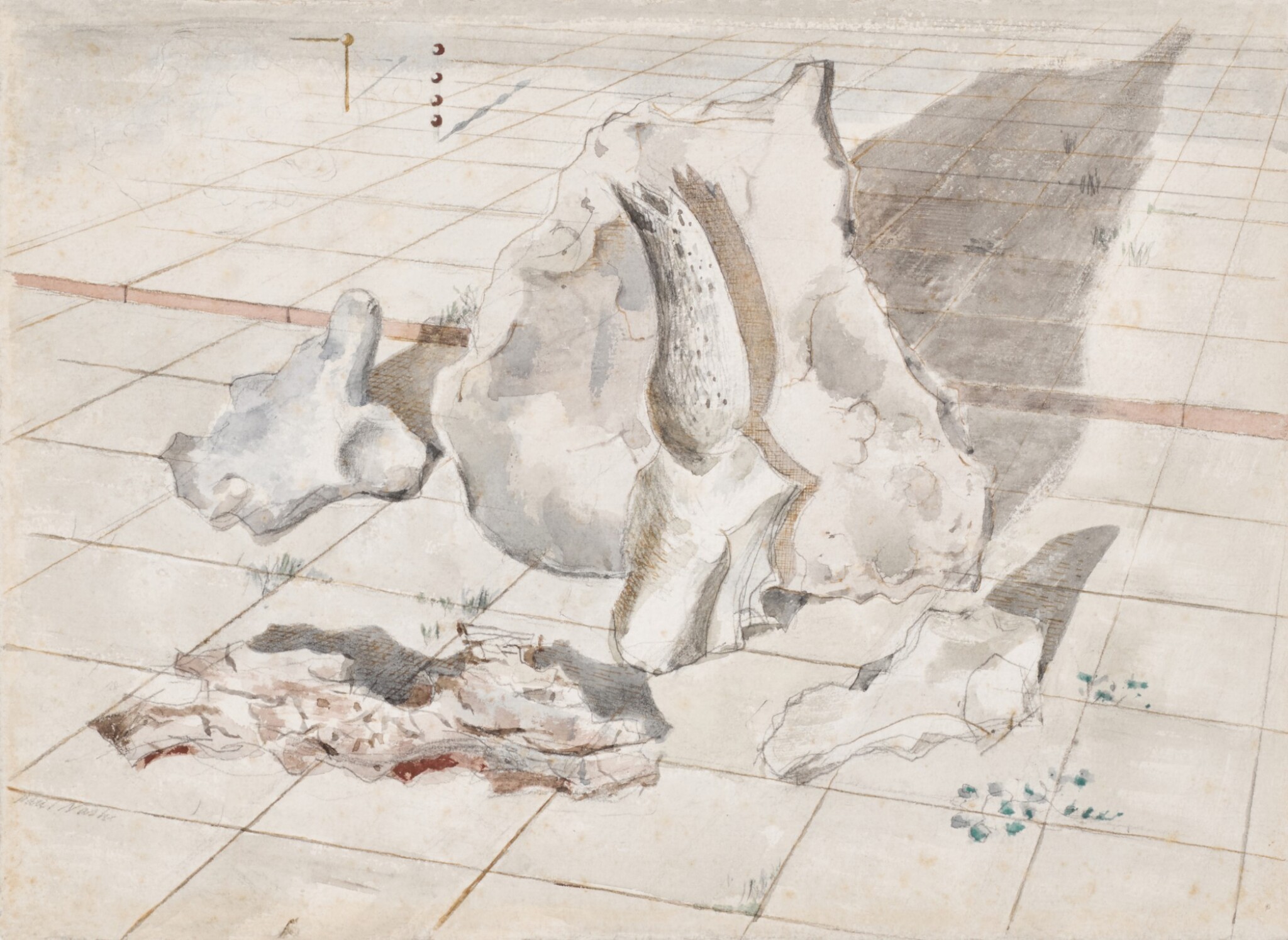 STUDY FOR LANDSCAPE OF BLEACHED OBJECTS

pencil, watercolour and wash on paper

Unexamined out of frame. The sheet does not appear to be fully laid down. The upper, left and right edges are slightly deckled or neatly cut or torn. There is an Artist's pinhole at the lower right corner. The sheet undulates very slightly in keeping with the Artist's materials. There are a few tiny nicks to the extreme edges of the sheet. There are some instances of foxing and staining, and some possible time staining to the sheet and staining towards the edges consistent with a previous mount. This excepting, the work appears in very good overall condition with vivid, fresh colours.

The work is float mounted and held behind glass in a stained wooden frame.

We are grateful to David Boyd Haycock for his kind assistance with the cataloguing of the present work.

Paul Nash painted Study for Landscape of Bleached Objects in the same year that Unit One had their first and only exhibition. Nash formed Unit One in 1933, and it counted amongst its members Henry Moore, Barbara Hepworth, Ben Nicholson, Edward Burra, Edward Wadsworth, John Armstrong, and John Bigges. Unit One adopted a deliberately avant-garde attitude, with Nash writing in a letter to The Times that Unit One was ‘to stand for the expression of a truly contemporary spirit, for that thing which is recognised as peculiarly of today in painting, sculpture and architecture’.

By the start of the 1930s, Nash was collecting found objects with fervour, amassing in his studio piles of jetsam and flotsam, pebbles, rocks, bones, shells, bits of wood and anything that caught his eye as it scrutinsed the landscape. The Surrealist Rene Magritte called Nash ‘the Master of the Object’ in 1936 (David Boyd Haycock, Paul Nash, 2002, p. 60). These found objects operated at various levels for Nash and the process of collecting held a multitude of meanings and purposes. The found objects themselves embodied the Surrealist ‘dream object’ as theorised by Andre Breton: the absolutely Surrealist embrace of ‘objective chance’ and deliberate coincidence, the machinations of the subconscious bearing proof in the conscious world.

The moment of encounter with the found object was also of primal importance for Nash, and throughout the 1930s he voraciously photographed found objects in the landscape, capturing the very moment when he happened across a particular gnarled tree, for example, thus memorialising the instant of significant discoveries. Within the photographs and the paintings, the object itself, through such valorisation, assumed anthropomorphic qualities, each seeming to have its own interior life and personal history, which Nash expanded upon in his 1937 article, The Life of the Inanimate Object:

‘…at this point I began to discover the significance of the so-called inanimate object Henceforth Nature become endowed for me with new life…The landscape, too, seemed now possessed of a different animation. To contemplate the personal beauty of stone and leaf, bark and shell, and to exalt them to be the principles of imaginary happenings became a new interest.’

Nash arranged these found objects, often alongside man-made objects, in various set-ups in his studio and then painted these mise-en-scenes, reveling in the encounters between each objects, and between objects and landscape, these happenings suggest ‘a mysterious imaginative event’, as Emma Chambers has commented (Emma Chambers, ‘The Life of the Inanimate Object’ in Paul Nash, London, 2016, p.37). The significance here is not just the found objects but the found objects existing within the surrealist landscape. Drawing on the long-established history of British artists finding whatever sustenance they need from the British landscape, be that romantic, symbolic, religious, sublime, so Nash looked to the landscape and found the surreal.

In his essay ‘Unseen Landscapes’, published in Country Life in 1938, he wrote of landscapes that are unseen not because they are invisible or part of the unconscious, but that are unseen

‘…merely because they are not perceived… To discover, for instance, the landscape of bleached objects is to open up endless possibilities of fresh adventure… But, you may protest, who in the world wants to bother their sight or understanding about a bleached object? That, however, is an entirely different matter. All these things under consideration here – stones, bones, empty fields, demolished houses and back gardens – all these have their trivial feature, as it were, their blind side; but, also, they have another character, and this is neither moral nor sentimental nor literary, but rather something strange and – for want of a better word, which may not exist – poetical.’

In the present work, Nash arranges stone, shells, rock and wood within a near featureless and unidentifiable Surrealist landscape. As with his famous and towering megaliths, Nash monumentalises the central rock and elongates its shadow, imbuing it with literal and figurative presence. Unexplained small black and brown spheres hover in the background, very much deliberate incorporations with shadows grounding them in the scene. The griding of the landscape, a common feature of Nash’s watercolours, here is an integral feature of the ground: Nash blurs the boundaries of artistic device and the reality of this tableau. Mystery abounds; the encounter of the bleached objects remains a subtle, alluring enigma.

An oil of the same name and date, Landscape of Bleached Objects, with related objects placed within rolling green hills, is held in the collection of the Auckland Art Gallery.