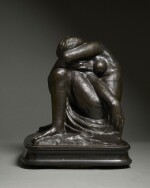 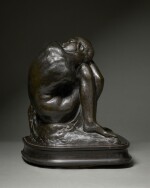 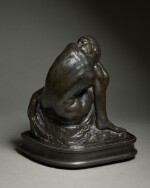 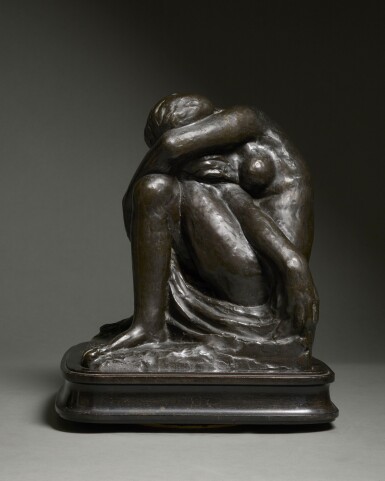 signed MESTROVIC; the underside inscribed in ink MESTROVIC and 2738 AX, and with a label inscribed 2738 AX

bronze, on a revolving ebonised wood base

Overall the condition is very good with minor dirt and wear to the surface consistent with age, including some dust in the crevices. There is very minor rubbing to the patina, including at the toes and some other high points. There are a few minor scratches and abrasions including to the woman's back. Some very minor greening in areas.

There is wear to the revolving ebonised wood base, including some surface scratches and abrasions.

The present bronze is mentioned in an autograph letter by Mestrovic, sent from Zagreb to Mr Frost on 8 March 1936:

'Dear Sir, I have received your letter, and it gives me great pleasure to tell you that the little statue of min [sic], of which sent the photograph, was made in London, in 1916, and was a study of woman bending, that I never completed in big size. Yours faithfully, Ivan Mestrovic'

As such, the present work is extremely rare and possibly the only bronze known to have been cast while the artist was living in London. A plaster model is preserved in the Glyptotheque of the Croatian Academy of Sciences in Zagreb. It was exhibited at the Grafton Galleries in 1917 and is likely to date between 1914 and 1916, when Mestrovic modelled a number of crouching female nudes. The present bronze, of which no other versions are known in this material, may be identical with one exhibited at The Fine Art Society in 1924 (see 'Exhibited').