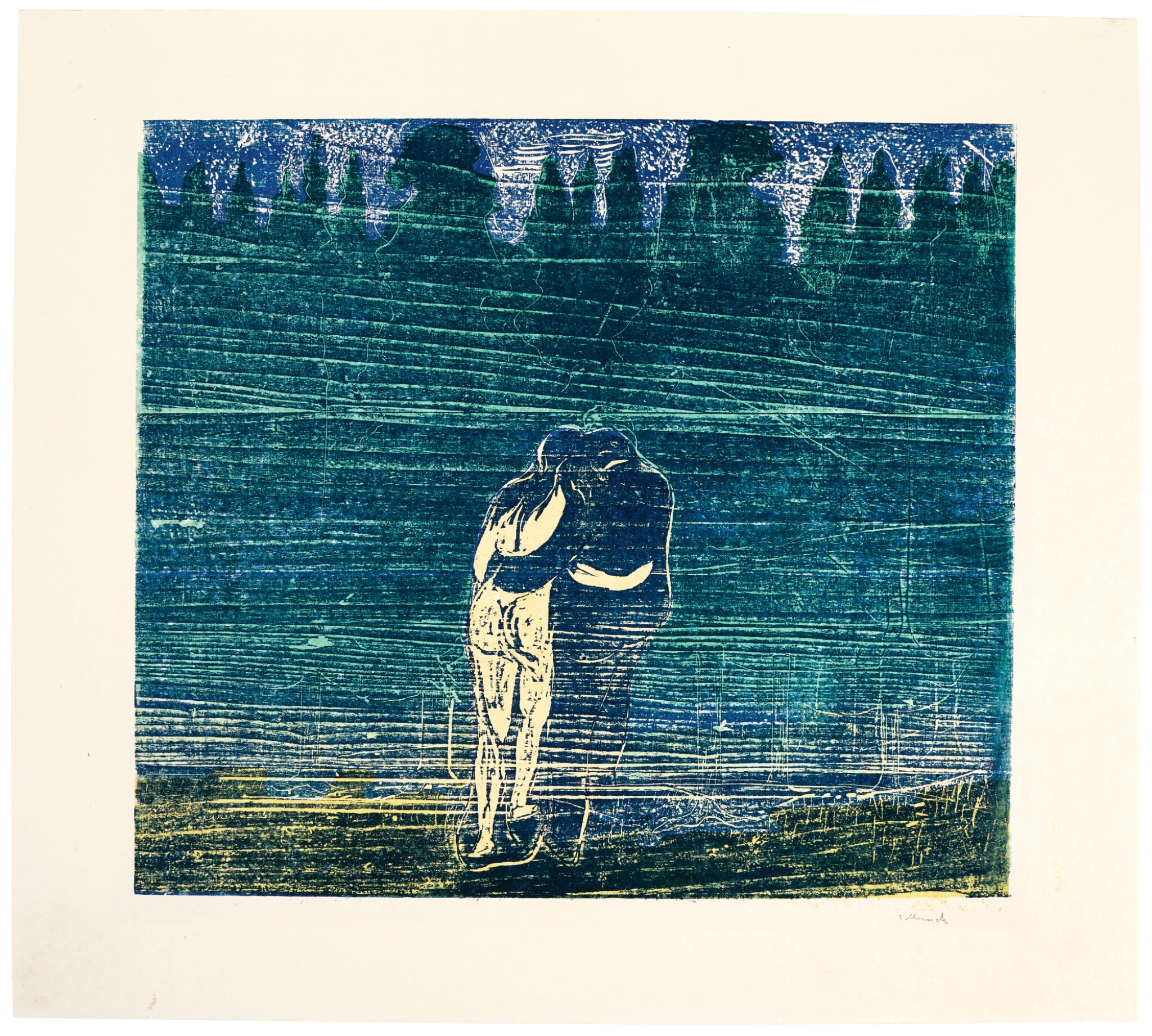 The suggestive composition of Towards the Forest – an embracing couple stepping towards thick Norwegian woodland – has never been executed as a painting.

Nonetheless, this woodcut, which is one of his largest, was particularly close to Munch’s heart. The artist returned to it time and time again, several years apart, adapting each impression to convey different moods and emotions to the viewer. There are 49 impressions in the Munch museum, with 12 in its later version.

As a result, this woodcut is found in several colour variations, showcasing different effects. Here, in the 1897 version, the superimposition of the turquoise green over the blue adds a deep and melancholic hue to the mysterious forest. Impressions printed in a darker palette immerse the couple in a nocturnal landscape whilst the 1915 impressions with blue sky and green foliage invite the lovers into nature (both instances illustrated below).

Towards the Forest is also a wonderful example of how Munch cut up his woodblocks in progressively complex ways. In the present impression of 1897, the man leads the naked woman and blends into the foliage. Their arms interlace in a contrast between positive and negative. In 1915, after having sent the blocks home from Germany, Munch reworked and printed them in a different sequence – the original drawing block was used as the colour block, while the old colour block was developed further and used as the new drawing block. As a result, the figure of the woman now wears a flowing dress, while the woods have thinned out and the trees and clouds have more distinct outlines.

Another characteristic of Munch’s practice was his weathering of the woodblock to create a more textural grain, which has clearly been incorporated into the present work. The horizontal woodgrain pulls the couple to the picture’s surface, slowing their progress into the ethereal forest.  This feature is no longer visible in the later impressions, where the couple appear less constrained, reflecting Munch’s new attitude toward life; a calmer and more positive outlook than in 1897.

Despite the number of impressions in the Munch museum, Towards the Forest, very rarely comes up at auction. This is a wonderful opportunity to acquire one of Munch's finest and most important subjects from 1897, a period during which he experienced an explosion of creativity and was at his peak in his career as a printmaker.