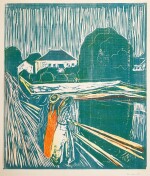 The important woodcut printed in teal blue with lithograph printed in yellow and orange-red, the colours bright, 1918, Woll's third (final) variation with the dress on the central figure masked out, signed in pencil, printed by Nielsen, on wove paper, framed

Edvard Munch’s The Girls on the Bridge has been widely recognised as one of his most celebrated compositions, even from its first unveiling in the painting of 1901. As was often the case with the artist’s successful works, Munch continued to revisit the composition until 1935, producing a total of twelve known oil paintings, as well as five prints: two woodcuts, one etching and two lithographs.

His final, largest and most sought-after print of the subject is undeniably the present woodcut dating from 1918-20. The chosen medium with the varied marks of the gouging produce a nuanced and dynamic composition. The rough vertical striations in the sky coupled with the sharp diagonal line of the bridge, which extends to meet the horizontal stretch of land on the shore, come together to create one of his most dramatic renditions of the subject.

Munch was deeply attached to the landscape of Åsgårdstrand, which he visited most summers, and from 1899 he rented a small house there that he later owned. The bridge, where the three girls stand close together and gaze over the water, is actually the pier where visitors caught the ferry to and from Kristiana. Both the pier and the Kjøsterud building in the background are still in existence today and were illustrated in a postcard Munch sent to Gustave Schiefler (see image below). The postcard was published after the artist’s picture became internationally known, showing how his motifs were integrated into popular culture.

Several monochrome impressions are known; however Munch clearly intended for this to be a multi-colour image. The colours are printed from a fluctuating number of lithographic zinc plates and parts of the motif are drawn with lithographic crayon. The zincograph combined with the woodcut and use of stencil demonstrate Munch’s interest in sophisticated printmaking methods.