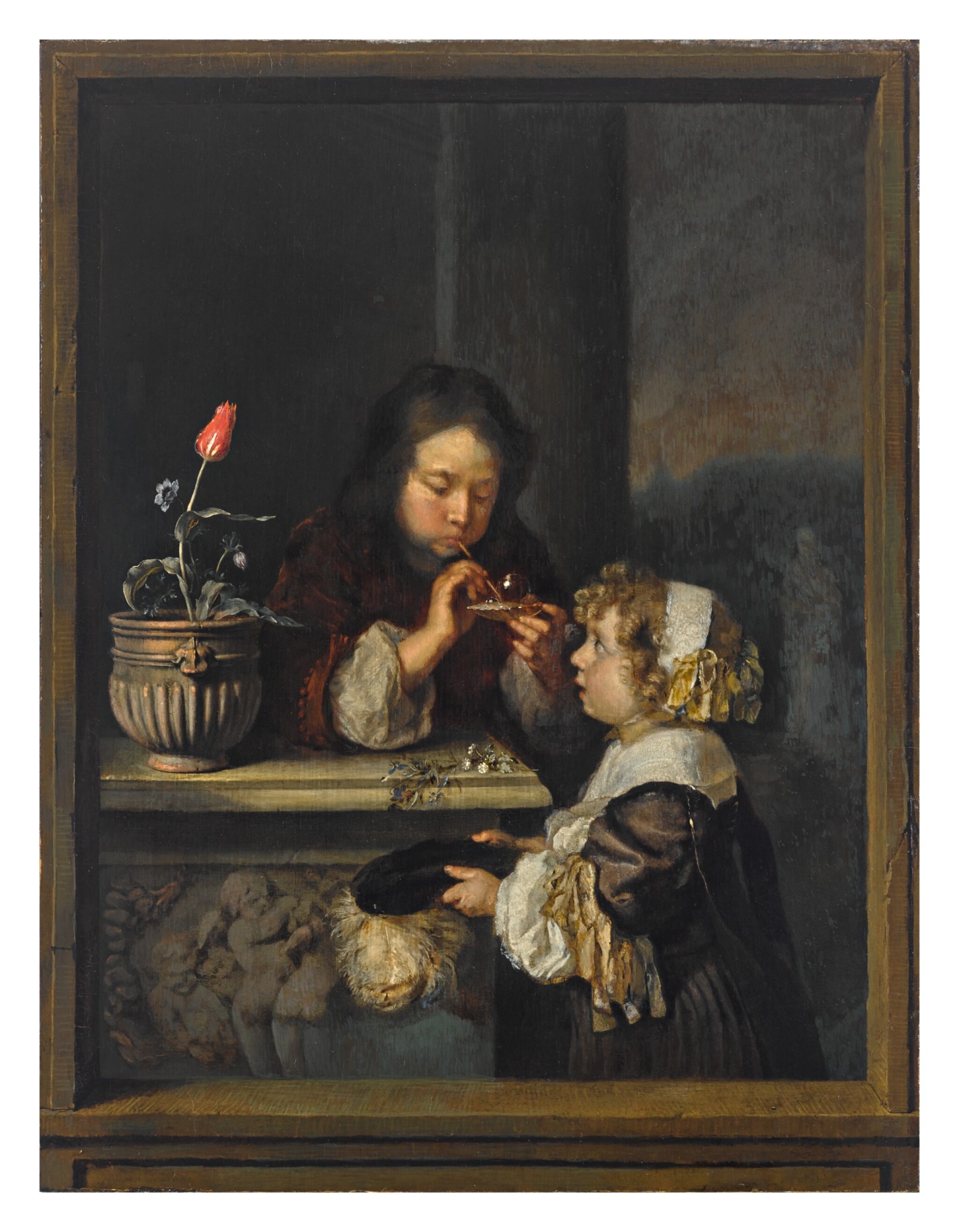 The original panel has been set into another panel with additions on all sides to make the composition larger. This effectively added the window element which does not appear to be original to the composition. The addition is 1.5 inches across the bottom, and ¾ of an inch on the other three sides. While these additions are consistent in style and of reasonable quality they would appear to be later in date. The painting is under a slightly mottled varnish which could be freshened, but makes a very nice impression. There is good detail scattered throughout, particularly in the areas with lead white, including in the terracotta planter, the girl's hair piece and sleeve. The background garden appears to be somewhat thin. The quality of this painting would be more evident with a fresh treatment.

St. Petersburg Academy of Fine Arts, by bequest of above, until at least 1913 (as by Eglon van der Neer, according to the 1973 sale catalogue);

C. Hofstede de Groot, Catalogue Raisonné of the Works of the Most Eminent Dutch and Flemish Painters of the Seventeenth Century, Leipzig/London 1913, vol. V, p. 207, cat. no. 150;

This finely painted and intimate genre scene of two children blowing bubbles before a niche dates to the late 1660s, at which time Caspar Netscher was an established painter of cabinet pictures in the courtly city of The Hague. The painting is first recorded there in the collection of Adriaen Bout, who may have been its first owner, and who sold his collection in 1733. Restorations over time have changed the setting slightly: the stone niche may be a later addition, and in the auction catalogues of the 1970s the strips at the side and a ledge at the bottom variously appeared and disappeared in different photographs.1 When the painting was last sold from the Guterman collection in 1988, it was reproduced in error without the trompe-l’eoil border around the edge.

The popularity of this work and the composition is attested by an engraving made less than a decade after its execution by Cornelis Hubertus van Meurs of Amsterdam. The engraving includes a French inscription that makes clear the vanitas message of the painting: “Toute le Pompeux Eclat De Ce Vaste Univers,/ Les Brillants Couleurs q’Ont Le Nature et l’Art,/ Dans ce globe Ampoulle plus Frele que le Verre,/ Sont De la Vanite l’appange et la Part” [All the pompous radiance of this vast universe/ the brilliant colors of nature and art,/ in this globe blisters more frail than glass,/are vanity whole and part].

In addition to being a child’s pastime, blowing bubbles also carry a more somber association: their short life span and delicate nature remind viewers of the frailty of life and inevitability of death. In seventeenth century Holland, children and their games were interpreted as miniature life lessons. Artists like Netscher could thus combine the sweetness and innocent beauty of childhood playtime with a more serious message—the contradiction adds to the painting’s poignancy and offers an intellectual exercise for the viewer.