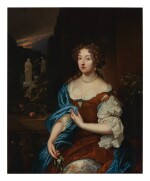 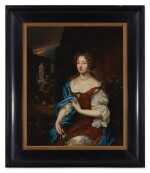 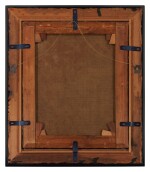 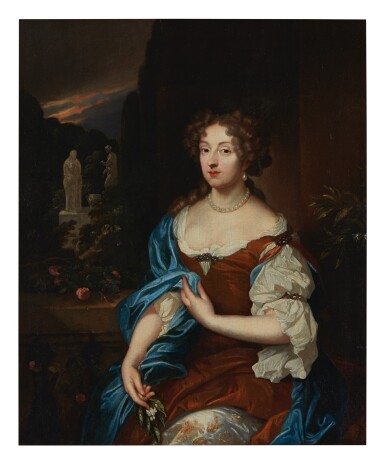 The canvas is lined and stable on its stretcher. The painting appears to be in overall good condition, and the image reads clearly beneath an old, slightly yellowed varnish. Some of the darker shadows have sunk over time, for example in the blues of the cloth and in the lower background. Inspection under UV reveals a thick varnish that may mask an older campaign of restoration. There are some more recent scattered spots here and there, near the edges, a few thin strokes in her lower costume as well as possibly some strengthening to the shadows in her lap. There is a spot of retouching to her sleeve at right, and one small spot of retouched loss above her head. There may be an old vertical crease or repaired fissure to the canvas above her head, not visible in UV, but visible in raking light. Offered in a simple dark wood frame with a gilt liner.

This elegant portrait of Catharina van Capelle originated in the studio of Caspar Netscher, who was among the most preeminent portrait painters in The Hague in the last quarter of the 17th century. It is of high-quality, preserving Netscher’s fine technique and rich coloring, and it compares closely to Netscher’s presumed original, signed and dated 1683, that formed part of a series of seven portraits of the Wolters Family: three brothers (Steven, Louis, Raymond), one sister (Maria) and three of their spouses. The portraits in that series, which today belong to the Van de Poll Wolters Quina Stichting (PWQ), all include a notable degree of studio assistance, possibly due to Netscher’s declining health or his obligation to other projects towards the end of his career. Additional studio versions of these portraits are known, possibly commissioned by other members of the Wolters family.

Catharine van Capelle (1655-1704), the daughter of Nicolaas Rochusz. van Capelle and Elisabeth Suerland, married her first husband, Raymond Wolters (1653-1684), in 1674. She would have been around the age of 28 when this likeness of her was recorded, shown luxuriously garbed, seated near a lush garden, and holding orange blossoms in her hand. Though her husband would die about a year after this portrait was captured, Catharine would go on to marry two more times: Jean Pauw in 1685 and later Henry ter Smitte.