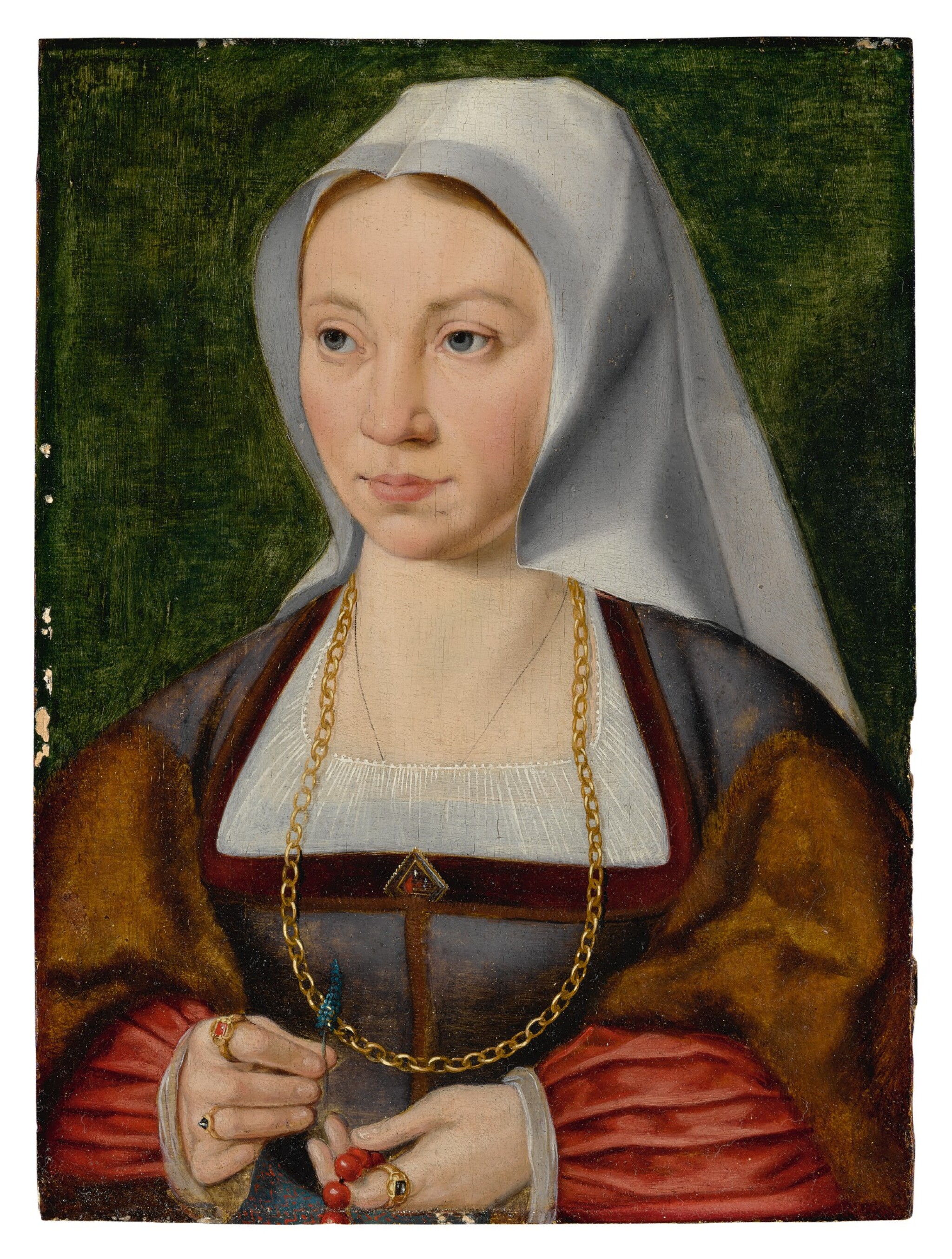 PORTRAIT OF A LADY HOLDING A ROSARY AND A FLOWER

The following condition report has been provided by Michael Heidelberg of Heidelberg Conservation, LLC., 150 East 77th Street, New York, NY 10021, an independent restorer who is not an employee of Sotheby's.

The painting is in overall excellent condition. The support is an unthinned,

uncradled single plank of oak, bevelled at the edges. The panel is in plane and

shows every evidence of having been in stable condition since facture. It is

lightly waxed on the reverse. The paint layer is almost fully intact with a handful

of pinpoint stains that have been touched out with the tip of the brush. There

is a light overally cupping that is very typical of the period, as is the painting's

craquelure. These both add a pleasing variation of surface to the painting. The

Where acquired by the father of the present owner.

Joos van Cleve was one of the most important artists working in Antwerp in the early sixteenth century. He was probably from Kleve, a city in the lower Rhine region, and first worked in the studio of Jan Joest (1455/60-1519) in Kalkar. By 1511, Joos was settled in Antwerp and by 1516 he began taking on pupils, eventually establishing a large and productive workshop himself. His oeuvre is remarkably diverse and included large, complex altarpieces, elegant commissioned portraits such as the present painting, as well as numerous Virgin and Child compositions, which proved enormously popular and were widely reproduced.

Portraits by Joos van Cleve and his workshop tend to follow a similar type: the man or woman is shown bust-length, turned towards either the right or left, against a solid background; the sitter's hands are almost always included and shown holding an object or engaged in an activity. Most of his portraits, including the present work, can be dated from 1515/16 through the early 1520s.

Max J. Friedländer was among the first to publish this small-scale portrait of a lady, where he listed it as a fully autograph work by van Cleve. Though Friedländer dated the panel to circa 1515, scholars today generally agree on a slightly later dating of circa 1518-1520, at the time of the artist's early maturity.

Based on digital images, Micha Leeflang, to whom we are grateful, believes the painting to be by Joos van Cleve himself. She compares the work to three other portraits by the artist: Portrait of a Woman in the Galleria degli Uffizi, Florence, which is dated 1520 and shows a woman in a similar costume, also holding a red rosary (fig. 1); Portrait of a Woman in Enschede, Collectie Rijksmuseum Twenthe, from circa 1520;1 and Portrait of Margaretha Boghe at the National Gallery in Washington, which is the closest in the depiction of the hands and has a similar green background to the present work.2 The latter painting and its pair can be dated to circa 1518. John Hand, to whom we are also grateful, has examined the painting firsthand and believes it is was likely painted by the workshop of Joos van Cleve.

Examination under infrared-reflectography reveals limited underdrawing in the face with some simple lines in the clothing and hands, which is consistent with Joos van Cleve's practice for portraits. While many of his altarpieces and religious compositions had detailed under drawing and cartoons to help guide his workshop, his portraits would have been based on separate drawings that were made from life.