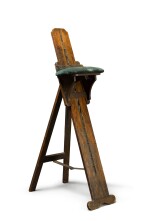 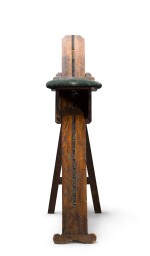 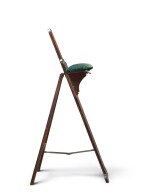 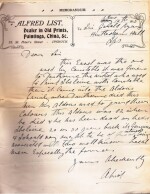 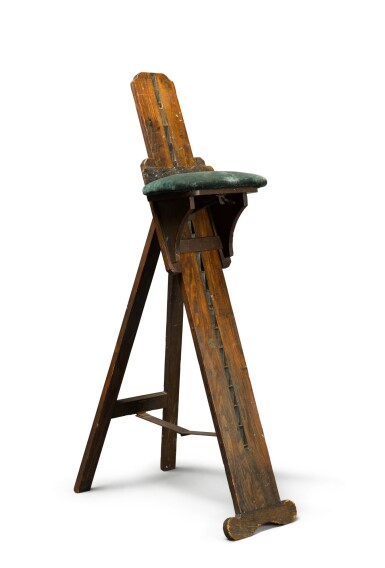 In overall reaonable condition with evidence of use including paint spattering. Velvet covering to seat later. Evidence of manufacturer's label now lacking. Front front probably replaced. Generally with minor old marks and scrathes consisitent with age and use.

Thence by descent to Adrian Ryan (1920-98) (illustrated in his studio at 48 Tite Street in 1943) and gifted to the current owner in Adrian’s lifetime.

According to a memorandum of sale dated 14 June 1913, from Alfred List – ‘Dealer in Old prints, Paintings, China, &c.’ - to Sir Gerald Ryan Bt., ‘This easel was the one used by [John] Constable it was given to [John] Dunthorne the artist who used to paint I believe with Constable. Then it came into the Aldous family when Dunthorne died. This man Mr [Joseph] Aldous used to grind their colours.’

It is entirely conceivable the easel once belonged to Suffolk-born John Constable (1776-1837) and was subsequently gifted to his life-long friend and collaborator John Dunthorne (1798-1832). Dunthorne, known as Johnny, was like his father intimately connected with Constable. In his teens he assisted Constable during his visits to East Bergholt and in 1824 became his studio assistant in London. In February 1820, aged 21, he drew the hay wain 'on a bitterly cold February morning' and sent the sketches to London, as directed by Constable who’d decided to include a farm vehicle crossing the ford, but had left Flatford in the summer without having made a sketch of it.

When John Dunthorne the elder died twelve years after his son, on 13 October, 1844, his chattels were auctioned on 6 November at the Red Lion Inn, East Bergholt, by the direction of his executors, but the easel is not listed among them.

Joseph Aldous the elder (1787-1859), also of East Bergholt, is documented to have supplied stretchers and art materials to Constable, and Joseph Aldous (junior) (1815-99) was a 'painter' according to the burial register, but continued the family business and died aged 84. Both are buried in the churchyard of St Mary the Virgin; as is a grandson, also Joseph (b. 1848), the possible source for Alfred List acquiring the easel by 1913, before he died in 1918.

Sir Gerald Hemmington Ryan Bt. (d. 1937) bought Hintlesham Hall in 1909 as an adjunct to his status as actuary-supremo to Prime Minister Lloyd George. Razor-sharp and hard-working ('sans travail rien' was the family motto) he worked out the government risk on insuring aircraft during WW1 and was given a baronetcy.

His second son, Vivian, who was deaf from childhood meningitis, was a painter, on whose marriage came the most impressive Charlcote, 3 Hampstead Hill Gardens, Adrian's birthplace, 'a cross between a Queen Anne rout-house and a Renaissance Casino' according to Giles' Artists' Houses in London. Much was done to encourage Vivian in his painting, and the easel, with its associations to Constable, and a palette formerly belonging to J.F. Herring, are examples.

Having been a pupil of Seymour Lucas and friend of Frank O. Salisbury, Vivian's dedication to painting did not last and the easel eventually passed to Adrian Ryan. Adrian's first show was in 1943 at the Redfern Gallery who still represent his estate today. The present easel is clearly visible in a photograph of his studio at 48 Tite Street in 1943. Also pictured is Le Lapin Ecorche by Chaim Soutine, bought in March 1943 from the Storran Gallery in Albany Court Yard for £225, one of numerous works by Soutine, Modigliani, Utrillo, Picasso and Matisse that Adrian Ryan collected.